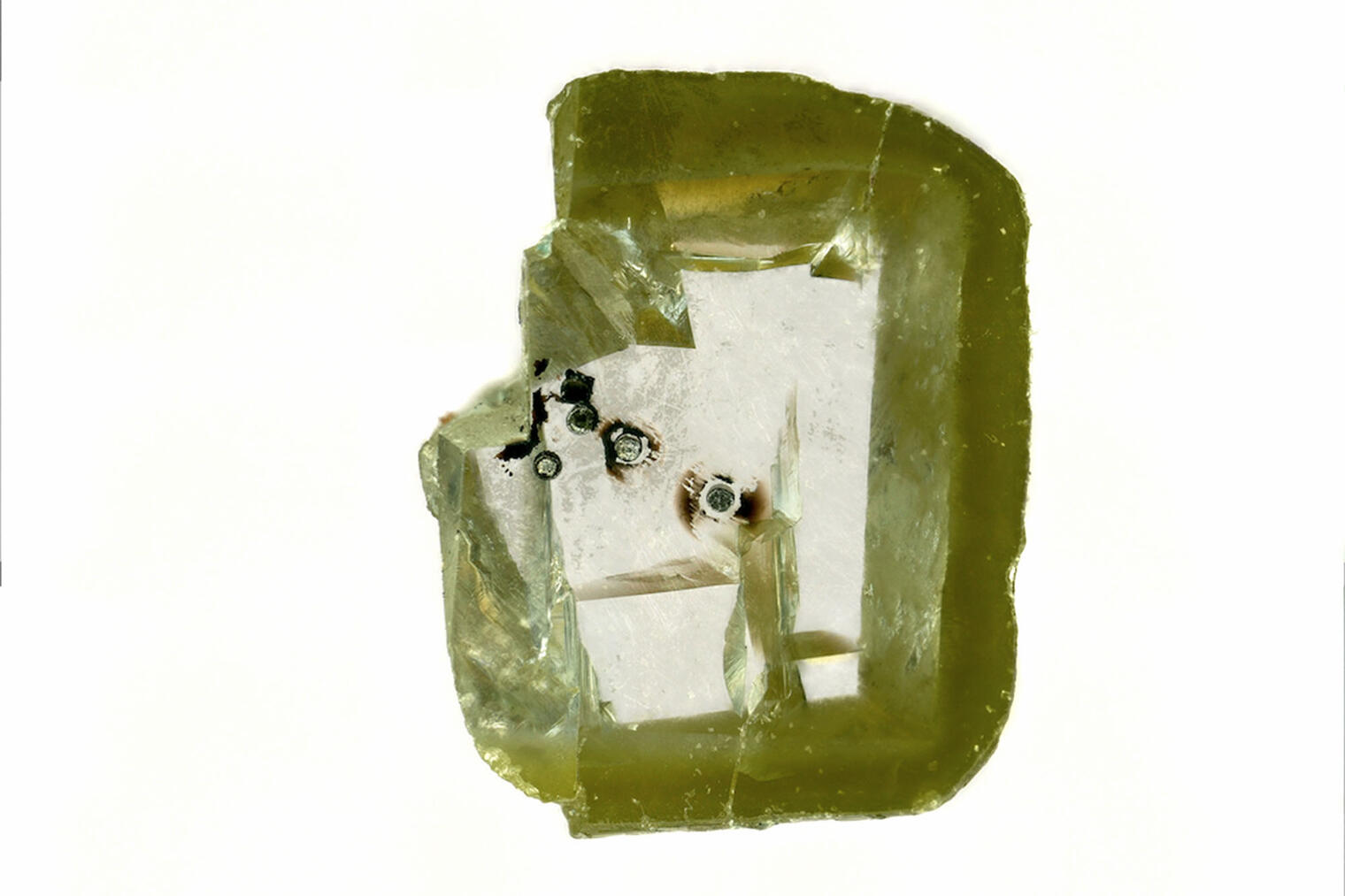 UNLV mineralogist Oliver Tschauner and colleagues discovered a new mineral that was carried to the surface of the Earth in a diamond (pictured above). (Photo credit: Aaron Celestian, Los Angeles County Natural History Museum)
Share
0
FacebookTwitterPinterestLinkedinTumblrRedditWhatsappTelegramEmail

By Natalie Bruzda
Submitted by University of Nevada, Las Vegas

LAS VEGAS–Geochemists at the University of Nevada, Las Vegas, have discovered a new mineral on the surface of the Earth. There’s just one catch: it shouldn’t be here.

The mineral — entrapped in a diamond — traveled up to the surface from at least 410 miles deep within the Earth’s lower mantle, the area between the planet’s core and crust. It’s the first time that lower mantle minerals have ever been observed in nature because they usually fall apart before they reach the Earth’s surface, unable to retain their structure outside of a high-pressure environment.

In this case, the diamond’s incredible strength preserved the mineral and made the discovery by scientists possible.

The calcium silicate compound, CaSiO₃-perovskite, showed up as infinitesimal small dark specks in a diamond unearthed from an African mine in the 1980s.

“For jewelers and buyers, the size, color, and clarity of a diamond all matter, and inclusions — those black specks that annoy the jeweler — for us, they’re a gift,” said UNLV mineralogist Oliver Tschauner, who led the study which was published Nov. 11 in the journal Science. “I think we were very surprised. We didn’t expect this.”

The diamond arrived on the surface decades ago in Botswana via the Orapa mine, the world’s largest diamond mine by area. A gem dealer sold the diamond in 1987 to a mineralogist at the California Institute of Technology in Pasadena, and recently, Tschauner and colleagues, including UNLV geochemist Shichun Huang, got their hands on the diamond and applied a new suite of scientific tools to analyze its interior structure.

What they found is a new crystalline compound that they named “davemaoite” after Ho-kwang “Dave” Mao, an experimental geophysicist who developed many of the techniques that Tschauner and his colleagues use today.

Davemaoite was approved as a new natural mineral by the Commission of New Minerals, Nomenclature, and Classification of the International Mineralogical Association.

Tschauner believes davemaoite originated between 410 and 560 miles below the Earth’s surface, and its discovery highlights just one of two ways that highly pressurized minerals are found by us in nature: from deep within Earth’s interior or inside meteorites.

He’s hopeful that discoveries of more minerals — in larger quantities — are on the horizon, which will allow scientists to model the evolution of the Earth’s mantle in greater detail.

Their day in the sun