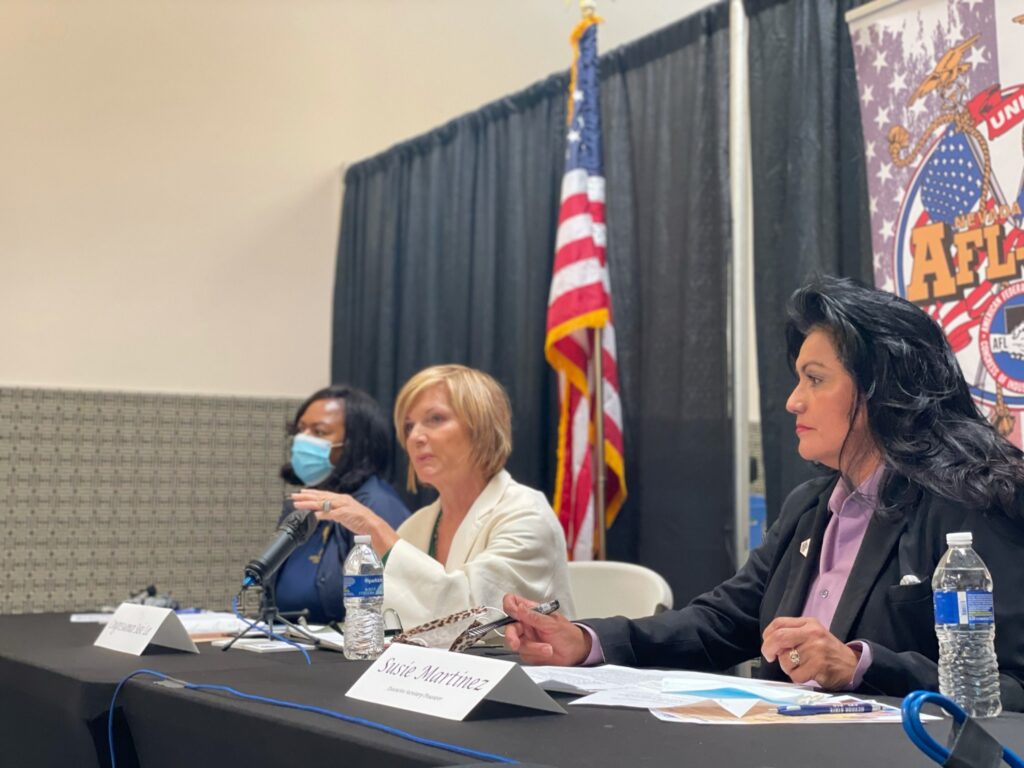 LAS VEGAS — Supporters of the Infrastructure Investment and Jobs Acts believe an estimated 140,000 new jobs could be generated in Nevada over the next decade.

“We can do all the regulations we want when it comes to fair labor standards,” she said. “Unless (Occupational Safety and Health Administration) and the (National) Labor Relations Board are equipped with the teeth to enforce those, it really doesn’t have an impact. Corporations can just say, ‘You know it’s not that big of a deal because the money saved by not complying far outweighs what it will cost.”

The $1.2 trillion bill, which received bipartisan support in the House and Senate before being signed into law by President Joe Biden on Nov. 15, makes historic investments in physical infrastructure like roads, bridges, airport, broadband, drought resilience and wildfire protection.

Nevada is expected to receive about $4 billion, which includes $2.5 billion in federal-aid highway apportioned funding, $459 million for public transportation and $225 million for bridge replacement.

The state could see 140,000 new jobs with new funding to repair and modernize the state’s infrastructure, said Susie Martinez, the executive secretary-treasurer of the Nevada State AFL-CIO.

The estimate comes from an analysis by Georgetown University.

Those jobs are expected to be attached to a variety of projects — from repairing more than 1,000 miles of roads in poor condition to undertaking numerous renewable energy projects.

Lee said the bill ensures “the jobs we are creating with this package are good-paying union jobs with prevailing wage” by taking both a carrot and stick approach.

“We are going to see a five fold increase of $50,000 up to $100,000 for  (prevailing wage) violations,” she said. “(The bill) has significant enforcement provisions in these packages.”

Another mechanism to ensure a prevailing wage is offered on projects increases enforcement through OSHA and its Wage and Hour Division that “increases penalties tenfold,” she said.

“For renewable energy tax credits, there is a bonus rate of five times the rate of the tax incentives for projects that have prevailing wages and apprenticeship (opportunities),” Lee said.

‘From cradle to grave’ to … the Senate

The infrastructure bill is one part of Biden’s agenda and could be accompanied by a nearly $2 trillion climate and social policy spending package, the Build Back Better bill..

The legislation passed the House Nov. 19 and faces obstacles in the Senate.

With zero Republicans supporting the proposed investments in child care, housing, health care and climate policy, and two Senate Democrats indicating resistance to portions of the House bill, Senate Democrats must still achieve 50 votes to pass the bill through the reconciliation process, a procedure that shields them from a filibuster.

Among the provisions that could benefit unions, Martinez said the Protecting the Right To Organize Act within the package is a way “to strengthen penalties for employers that retaliate against unionizing efforts, including those who orchestrate mandatory anti-union meetings, misclassifying workers and permanently replacing striking workers.”

Lee said that “everything in this package, we looked at it from cradle to grave” with provisions that would not only help families but help stabilize the economy.

While praising the scope of the bill the House passed, Lee warned there might be some aspects scaled back by the Senate.

U.S. Sens. Joe Manchin and Kyrsten Sinema have opposed numerous inclusions in the bill as well as the overall price tag.

“We’ve already heard Manchin is in opposition of the family leave provision,” Lee said. “I don’t know where that stands right now, but I think there is a feeling to bring him along on that. I think you’re going to see some pulling back on some things. The good news is I don’t think climate investment is on the chopping block. I think there is a general consensus around that.”

“I haven’t been involved in Senate negotiations so I’m not 100% sure,” she said in an interview. “I would say, looking at what I’ve seen, the energy around, and concerns, (child care has) been one of them. But that’s one that is wildly popular too. It is so well needed in our state.”

The current language of the bill means people “are going to receive subsidies so they’re not paying more than 7% of their income on child care,” Lee said.

Some proposals in the social spending bill, including provisions to lower prescription drug costs, were closed to being stripped out. While Biden initially supported including language on drug costs, he outlined a scaled-back framework that omitted provisions that called for Medicaid to negotiate drug prices.

However, many House Democrats, including Lee, pushed to have those reinstated.

Medicaid’s ability to negotiate drug prices won’t start until 2023 with the price caps beginning in 2025.

Lee said that because Medicaid’s contracts are negotiated, they weren’t able to go back retroactively.

“I’ve been talking to the committee leadership and trying to make sure we get language that gets out to the public so they understand this is coming,” she said. “We’re still working on it. I would like to see whether it’s the $2,000 cap or even the $35 cap on insulin, how we could get that implemented faster so people can see those savings in their monthly checkbook immediately.”

The insulin cap is scheduled to take effect in 2023.

Both bills together, Lee added, are about the future.

Infrastructure law: High-speed internet is as essential as water and...