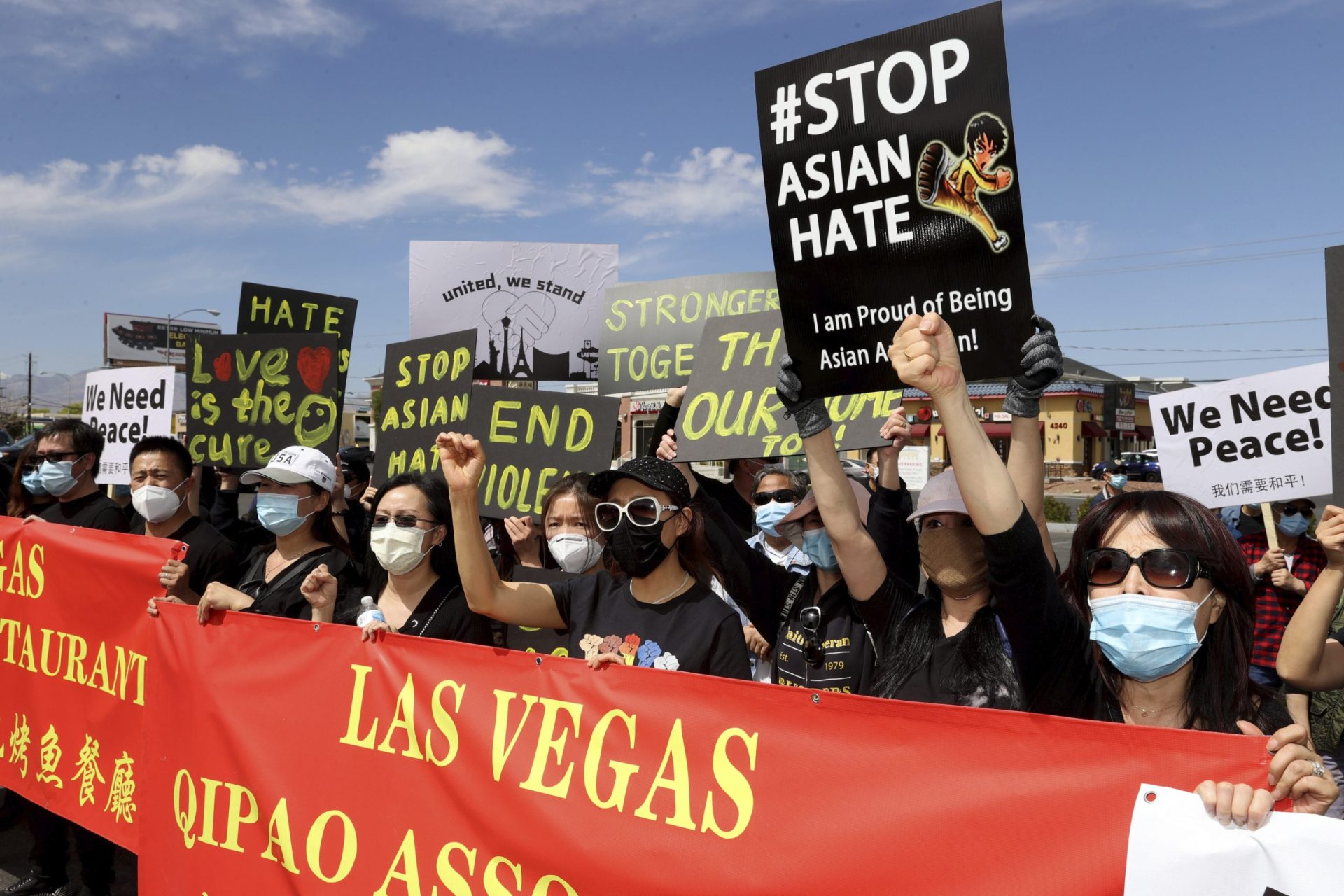 People, including Jenny Li of Las Vegas, right, rally at a "Stop Asian Hate" event at Chinatown Plaza Las Vegas on April 1, 2021. Lawmakers redrawing Nevada's political maps will be required to consider how to ensure the state's growing Asian American population is represented in state government for the next decade. The community's growth in Las Vegas' southwest suburbs exemplifies how competing interests arise as states throughout the country redistrict. (K.M. Cannon/Las Vegas Review-Journal via AP)
Share
0
FacebookTwitterPinterestLinkedinTumblrRedditWhatsappTelegramEmail

Asian Americans are the fastest growing racial or ethnic group in the United States and now make up more than 10% of the population in Hawaii, California, New Jersey, Washington and Nevada.

The demographic group — though diverse politically, linguistically and economically — has become a powerful voting bloc in these states and elsewhere. They’ve mostly supported Democratic presidential candidates since 2000 and, in Nevada, were a key constituency that candidates courted in the 2020 presidential primary.

For nearly two years, anti-Asian discrimination and violence prompted by the pandemic has politically engaged and unified the community, activists and academics said.

“If we all just identify as our ethnicity in itself, it’s not significant enough in numbers to negotiate, to build power or to become centered,” said Eric Jeng of Nevada’s Asian Community Development Council. “Our community shares concerns on immigration, health care, and education. And when anti-Asian hate was rising, they weren’t asking for where you’re from. People who looked Asian got attacked.”

Nevada has more than 400,000 residents who identify as Asian American, Pacific Islander or Native Hawaiian, according to census data. The majority live in the Las Vegas area and are of Filipino, Chinese, Japanese or Vietnamese descent.
Fueled by growth in Spring Valley and southwest Las Vegas, the population increased by 47.3% over the past decade, more than three times as much as the overall population.

The growth exemplifies the competing interests that arise during the redrawing of congressional and state legislative districts.

At least four Nevada lawmakers identify as Asian American but none represent the areas of southwest Las Vegas where the population is most concentrated.

Jeng said non-Asian politicians who represent districts with large Asian American populations often enjoy broad support and champion issues that matter to the community, but he wants districts to be drawn in a way that ensures Asian American candidates won’t be deterred from running.

“When people that look like them represent them, then the community gets involved more. When they don’t see people representing who look like them, they don’t really participate,” Jeng said, noting Michelle Wu and Aftab Pureval’s victories in mayoral elections last week in Boston and Cincinnati.

The communities that fall under the umbrella “AAPI” — which stands for Asian American and Pacific Islander — are diverse, but survey data shows the group is relatively united about certain political issues, said University of Maryland professor Janelle Wong.

“There’s so much discussion about Asian American diversity,” said Wong, who also works as co-director of AAPI Data. “But one of the most critical and astounding features of the Asian American community is that, despite this tremendous diversity, there’s actually a remarkable level of consensus around particular issues.”

The American Civil Liberties Union of Nevada is lobbying lawmakers to draw at least one district in which a majority of residents are Asian American or Pacific Islander to ensure the growing group’s voting power isn’t diluted.

“We’re concerned that, if the Legislature were to advance maps that are relatively the same as they stand today, it would result in the dilution of voting power in Nevada’s growing AAPI community that has and continues to be woefully underrepresented statewide,” Athar Haseebullah, the group’s executive director told lawmakers at an October committee hearing.