Group aims to slash wild horse and burro population by 75% 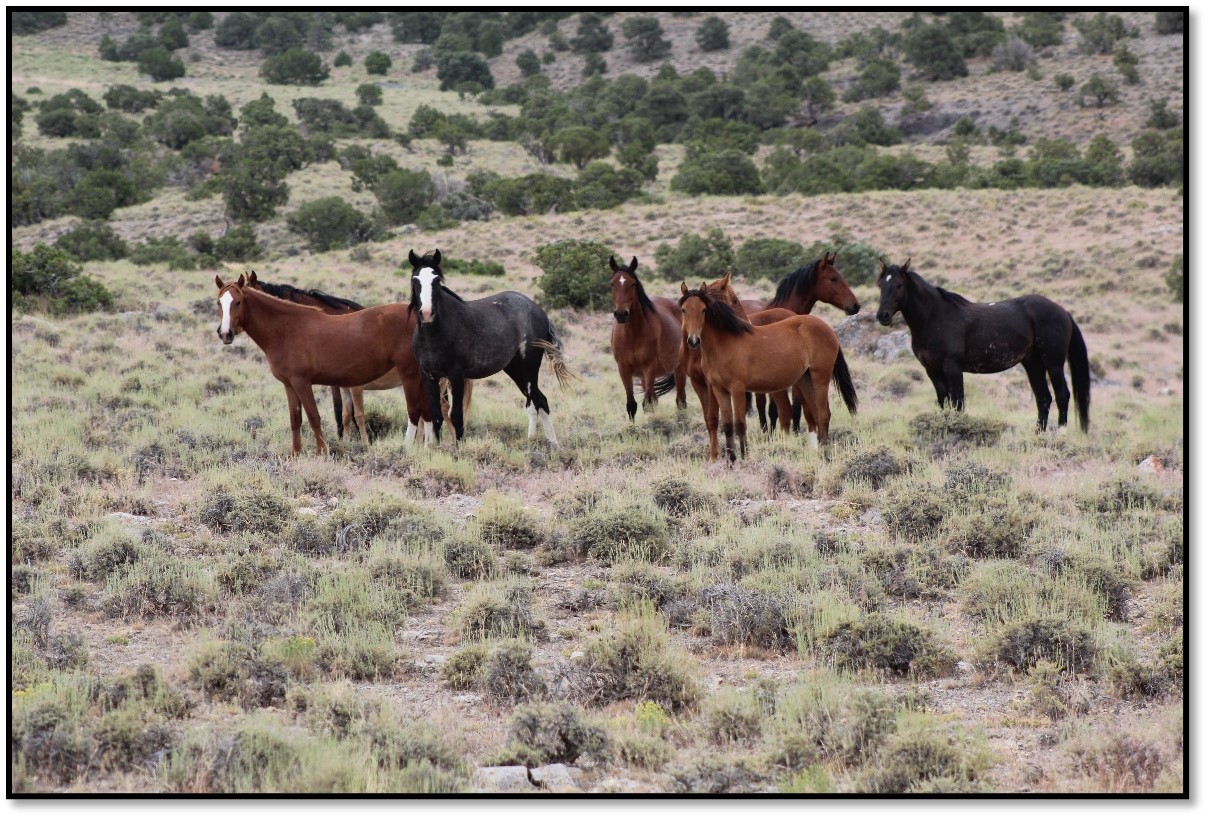 A coalition with an environmentally-friendly name is fronting for ranching and hunting interests out to accelerate the capture and confinement of Nevada’s wild horses and burros, according to critics.

“We believe the Coalition for Healthy Nevada Lands is a front organization for the livestock ranchers and commercial trappers who seek the eradication of wild horses from public lands in Nevada,” says Suzanne Roy of the American Wild Horse Campaign.

Roy says the “hyperfocus on wild horses is a calculated effort to scapegoat these iconic animals for environmental damage caused by massive livestock grazing across public lands in Nevada. In fact, private-livestock is permitted to graze on 43 million of the 48 million acres of BLM land in Nevada. Wild horses and burros are restricted to designated Herd Management Areas (HMAs) that comprise just 14 million acres, which they share with livestock.”

Last week the Nevada Wildlife Commission signed on to a letter to Interior Secretary Deb Haaland from the Coalition for Healthy Nevada Lands, Wildlife, and Free-Roaming Horses.

Commissioner David McNinch, who represents conservation interests on the wildlife commission, which is dominated by sportsmen and ranchers, called the collection of supporters a “very unique oddfellow coalition” which includes the National Cattlemen’s Beef Association, the ASPCA, and the Humane Society of the United States.

The unlikely alliance is the result of climate change, says one participant.

“The greatest threat to our wild horses and burros and our public lands right now isn’t the BLM, it’s not cattle, ranching or mining interests. It’s not animal advocates. It’s climate change and the new reality is fast settling in,” Stephanie Boyles Griffin, the chief scientist of the Humane Society of the United States’ wildlife protection department, told Reuters.

The Coalition’s letter says the state has “nearly four times the number of horses and burros that Nevada’s lands can support and sustain. We urgently ask for your assistance in lowering their population in Nevada to protect the health of the land, the water, the wildlife and the horses and burros themselves.”

The Coalition’s goal is to reduce the estimated 42,994 wild horses and 4,087 burros that roam Nevada by about 75 percent.

A Senate Joint Resolution with similar goals died in the 2021 Nevada Legislature.

By contrast, Nevada has just under half a million cows, according to the USDA.

“These coalitions pop up every few years made up of the same people as the last coalition,” says Leigh. “Each coalition has a gimmick that pushes more money to keep the current system at work; blame the horse, remove the horse and ignore management planning to protect the horse and the land it stands on from private profit mongers.”

They blame horses, don’t they?

Ranchers, hunters, and the BLM have long pointed the finger at wild horses and burros for devastating rangelands and competing with cattle and big game for scarce water and grass.

But the extent of damage to Nevada’s public lands from livestock and wildlife is largely a mystery because the BLM, charged with assessing and addressing the impacts, has reviewed less than half of the land allotted to ranchers in the state, according to BLM data obtained through a public information request by Public Employees for Environmental Responsibility.

According to PEER’s new report, based on BLM field office data, the BLM has granted 782 allotments of public rangeland to ranchers in Nevada, covering 43.2 million acres. Of that, it has failed during a multi-year process to assess more than half —  481 allotments totalling 24.7 million acres.

PEER’s database shows satellite images overlaid on BLM’s allotments, revealing the land’s condition, according to the organization. Of the more than 18 million acres of assessed land, only 3.5 million met BLM standards for soil condition, vegetation and water.

“By its own yardstick, BLM is a poor steward of our federal rangeland,” PEER Advocacy Director Kristen Stade said in a release, adding the government’s grazing fee of $1.35 per animal unit month (AUM) is a fraction of comparable fees on private land. “These ultra-low fees appear to subsidize land abuse.”

An AUM is the amount of forage a 1,000-pound cow and her unweaned calf will consume in one month.

The BLM, which is under the new leadership of Tracy Stone-Manning, did not respond to requests for comment.

PEER and some other organizations oppose Pres. Joe Biden’s declaration to include grazed rangelands as conserved area in his 30 x 30 initiative, which calls for conserving 30 percent of the nation’s lands and waters by 2030.

The BLM “has no idea about the condition of the majority of its grazed lands, including where degradation is coming from,” Madeleine Carey, Southwest Conservation Manager for WildEarth Guardians, said via email. “If the BLM were to study the health of all its rangelands, it would find that grazing by cattle causes significant harm to plants, water quality, and wildlife species, the very things that should be protected under 30×30.”

Some environmentalists contend cattle, not horses and burros, are the main culprit for degraded  rangelands, but get a pass from the BLM because of the agency’s close ties with cattle ranchers.

The Coalition is “not interested in getting into the cows vs horses conversation because it is not an apples to apples comparison,” Rebekah Stetson, who is leading the Coalition effort to control the horse and burro populations through round-ups, confinement, adoption and sale, told the Current via email. “As ecosystems are complex, the solutions to healing them are also complex and do not have a one size fits all solution.”

Stetson would not say what, if any, efforts the Coalition is making to mitigate the impacts of cattle and big game on the land.

With much of Nevada in an extreme drought, “there has been little to no effort by the BLM to reduce the number of cows on the range as a means of adapting to the drought, showing that the agency has no intention of adapting its management of rangelands to reflect on the ground climate realities,” said Carey of WildEarth Guardians.

Animal activist Fred Voltz says the Coalition for Healthy Nevada Lands “has little to do with humane treatment for wild horses and burros. Instead, the coalition members seek to eliminate competition for food and water sources, so that the animals they target for recreational killing will be sufficiently numerous and healthy for NDOW licensees.”

Stetson did not respond to allegations from critics or inquiries about the Coalition’s funding.

“Nevada is the largest ‘landlord’ of wild free roaming horses and burros,” says the Coalition’s literature.

“Today, the excessive numbers of wild horses and burros on Nevada rangelands are degrading the health of our ecosystems, and putting many species of our native wildlife at risk,” the Coalition’s letter to Haaland reads.

However, native wildlife are largely thriving in Nevada, says Dr. Don Molde, a longtime activist for the state’s wildlife and co-founder of NV Wildlife Alliance.

”Nevada has too many elk,” says Molde.

The sage grouse, considered at times for inclusion as an endangered species, is at peril from wild horses as well as cattle, which attract predators to where they graze, say experts.

According to a 2016 study by the U.S. Geological Survey, “ravens are almost fifty percent more likely to inhabit areas in sagebrush landscapes if cattle are present, and preferentially select sites near greater sage-grouse breeding grounds.”

Adoption and other options

Since the program’s inception 40 years ago, the BLM has arranged adoptions for 250,000 wild horses and burros, according to its website.

In the last nine years, adoptions have averaged 2,586 a year nationwide.

Additionally, since 2005, the BLM has sold 5,900 horses and burros under a 2004 law that says any animal at least ten years old that has been passed over for adoption at least three times is eligible for sale “without limitation” to any willing buyers.

“It has been and remains the policy of the BLM, despite the unrestricted sales authority” granted in 2005, “NOT to sell or send any wild horses or burros to slaughterhouses or to ‘kill buyers,’” says the agency’s website.

Some 50,000 captured horses currently languish in government corrals and pastures, a heartbreaking reality for countless Americans who revere the wild horse as a symbol of the free-spirited west.

Voltz, in public comment opposing the Wildlife Commission’s endorsement of the Coalition’s request to Interior,, noted horses have been injured and killed “running for their lives in fear” as they are chased by helicopters during roundups.

“Imprisoned horses are sent off to slaughter in another jurisdiction,” he says, adding
“humane fertility control significantly increased from current levels would be a far more productive and less expensive process than underperforming helicopter roundups.”

“More adoption gimmicks to land wild horses in the slaughter pipeline, grant money for permittees to trap, big funding for more feedlots, are not what is needed,” says Leigh. “BLM needs to be pushed to protect the range for the horse, just like the sage-grouse.”

Horse rider hitting the trails again — from Vegas to...