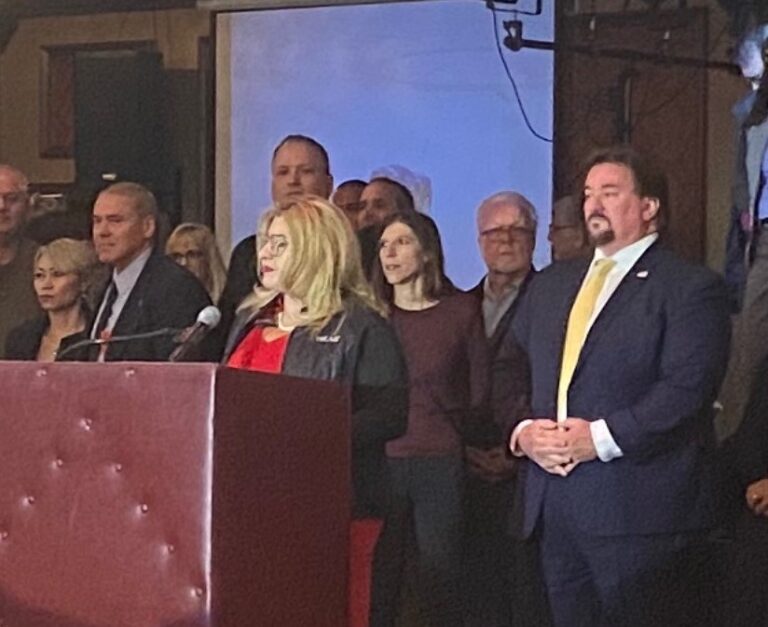 “Right now, we have Republican elected officials across the country congratulating themselves for working with Pelosi and the Biden administration. You’ll never hear me do that. And if you want that, vote for one of my primary opponents,” Fiore said. (Photo: Dana Gentry)
Share
0
FacebookTwitterPinterestLinkedinTumblrRedditWhatsappTelegramEmail

Without mention of the FBI probe into her use of campaign contributions, Las Vegas City Councilwoman Michele Fiore, backed by dozens of the people on whose behalf she says she’s fought, announced she’s jumped into the already crowded Nevada Republican gubernatorial primary.

“My name is Michele Fiore and I’m running for governor,” she said, then pivoted to the right-wing hot-button issues candidates are betting will resonate with conservative voters – banning the teaching of critical race theory in schools and outlawing vaccine mandates.

“When I fought for our Second Amendment, the Washington Post called me a ‘gun-toting calendar girl.’ When I fought for the Republican ticket in 2016, Politico magazine wrote `The lady is a Trump.’”

“Right now, we have Republican elected officials across the country congratulating themselves for working with Pelosi and the Biden administration. You’ll never hear me do that. And if you want that, vote for one of my primary opponents,” she said.

Fiore was the target of an unsuccessful recall effort last year, spurred in part by her plans for Floyd Lamb Park.

Her suggestion on a right-wing talk show that she’d retaliate against those who signed the recall petition prompted the recall organizer to plead guilty to a misdemeanor rather than turn the signed petitions over to the government, as required by law.

Political consultant Rory McShane is running Fiore’s campaign.  His firm coordinated the Nevada GOP’s recruitment of Proud Boys in the effort to generate distrust of the 2020 presidential election results, as first reported by the Current.

Fiore served two terms in the State Assembly. She was elected in 2017 to the Las Vegas City Council, where she served as Mayor Pro Tem until she stepped down from the position over controversial remarks that were perceived to be racist.

Cole aims to be 1st trans politician to win a...