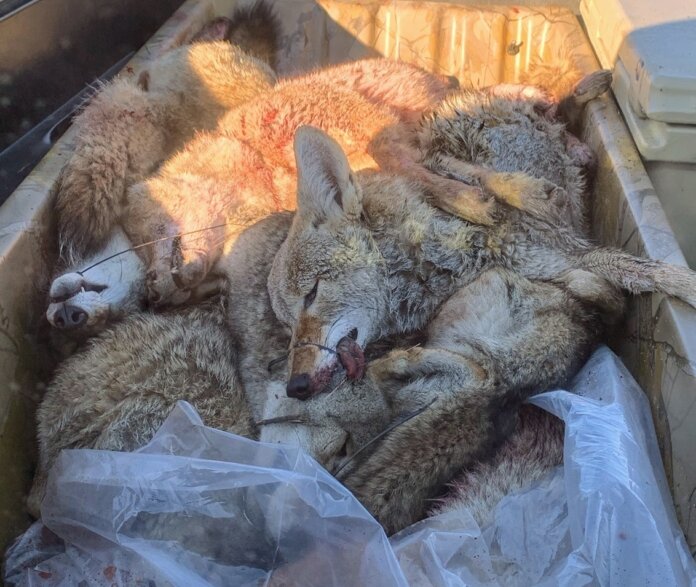 CARSON CITY–The Nevada Wildlife Commission, dominated by hunting and ranching interests, has debated coyote killing contests to death during the last year with no resolution to a ban originally proposed by the Clark County Commission. Now, with the threat of state lawmakers invading their territory, wildlife commissioners may be ready to act.

“I see the growing vocal support from local governments, and frustration with years of inaction on coyote contests as other states have ended them,” Democratic Assemblyman Howard Watts, chairman of the Assembly Natural Resources Committee, told the Current. “I believe that given that, if the Commission does not act the issue will almost certainly end up before the next Legislature with significant momentum.”

Killing contests have been banned in surrounding states, rendering Nevada a popular destination for the events, which offer prizes, usually cash, to the person who kills the most coyotes.

The Reno City Council recently joined Clark County in calling for an end to the events.

The prospect of legislative city slickers weighing in on what is widely viewed in urban circles as wanton waste of wildlife appears to be prompting action by the commission.

Longtime wildlife activist Dr. Don Molde says the “wildlife commission doesn’t like the Legislature meddling in its affairs,” and the prospect may be why the commission has scheduled a workshop on proposed regulatory language at its Nov. 5 meeting.

“It says to me the commission finally ‘gets it’,” Molde said of the move to hold a workshop absent a vote to approve regulatory language. He credits Director Tony Wasley, Chairwoman Tiffany East, and  Commissioner David McNinch, the sole representative on the commission for conservation interests, with generating support on the commission.

“I won’t speculate on how I feel the Wildlife Commission will vote,” East wrote in an email to the Current. She confirmed the commission will pursue regulatory language at its next meeting.

“We applaud (Assembly Natural Resources) Chairman Watts for taking such a reasonable stance and acting as a backstop against intransigence at the commission,” said Patrick Donnelly, Nevada State Director of the Center for Biological Diversity. “It stands to reason that the legislature would act to rein in coyote killing contests if the commission fails to act, since it is an inherently more democratic institution than the antiquated wildlife commission.”

By law, Nevada’s nine-member Wildlife Commission, which has wide latitude to enact policy and spend money, must have five “sportsmen,” i.e. hunters, fishermen or trappers who have purchased a license in three of the past four years, one rancher, one farmer, one conservationist, and one member of the public. Members are appointed by the governor.

Activists have long complained the commission’s composition is out of touch with Nevada’s mostly-urban population, which is increasingly likely to prefer photo safaris to big game hunts, according to a recent attitude survey of 1,133 Nevadans, which indicates:

Molde suggests “efforts to seek a remodeling of the Wildlife Commission to be more fair, equitable and democratic are now underway,” between Watts and Gov. Steve Sisolak’s office.

“Word gets around,” says Molde. “I’m sure some on the commission know that.”

Sisolak, who has refused to comment on killing contests, did not respond again to requests for comment on the commission’s composition or the contests.

Proponents of the contests euphemistically refer to the events as “calling contests,” emphasizing the skill involved in luring the prey rather than the kill.

Molde says the refusal of “killing contest participants to come to the events with their cameras and leave their guns at home,” awarding prizes to the person able to call, rather than kill the most coyotes, belies their true intention.

“That they won’t accept that as ‘middle ground’ tells us that it’s the killing, not the calling, that is at the heart of these events,” he said.