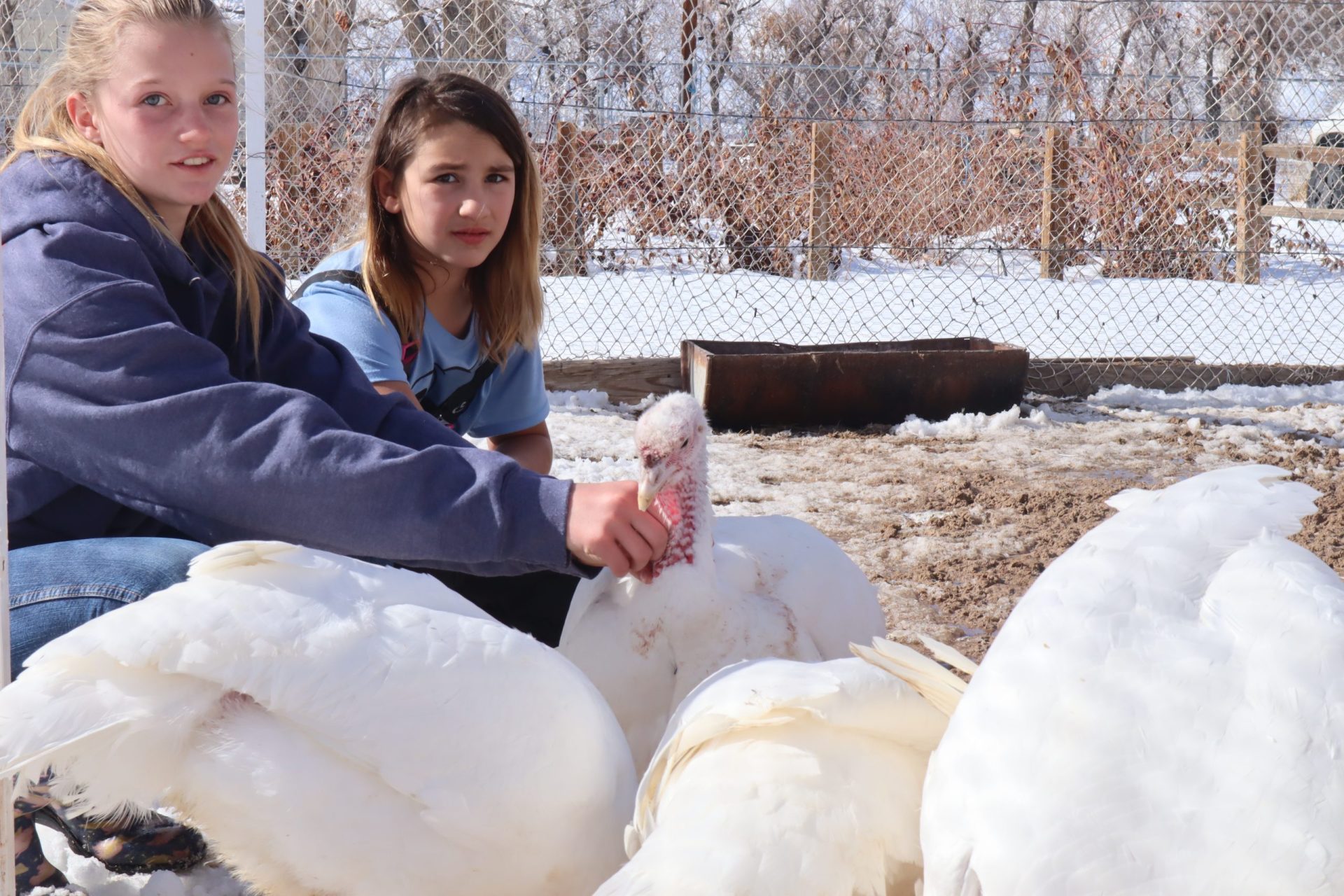 SMITH VALLEY — Back when COVID first came to flare and shelves were bare from a false food shortage scare, rural thieves in the night snuck onto the Smith Valley School grounds. They killed a dozen turkeys and thousands of bees, making off with thousands of dollars worth of carcasses and honey.

The victims, the student Turkey and Bee Managers can only speculate as to why, but they think it was COVID-related. Poultry thefts were being reported at about the time when food shortages were hitting supermarkets.

Now, the rural community of Smith Valley has come to the rescue, building the school turkey and bee programs back better than before.

The two students, Audrina Banta (Turkey Manager) and Chloe Unruh (Bee Manager) were new to their positions at the Smith Valley School last year, bright-eyed to get started with new farm skills. Both had farms at home, but no turkeys or bees, so this was a new niche.

“So, I thought it would be cool if I had turkeys involved in my life too,” said Banta. She had spent part of the year plucking turkeys in the school program for the Future Farmers of America program at Smith Valley.

After being accepted as the Turkey Manager, Banta ordered more than 40 eggs, hatched them at home, and started raising them, but most died. “The temperature when they were being shipped here was like from hot to cold from really cold to hot,” she said. But some survived and she became close with them, spending her lunch hours in the coop petting the talkative birds.

“I like that they are really caring birds. They always know when I am having a rough day. I went out there to eat my burger and they all just took it away from me.”

After the school closed due to COVID, she went back to feed the birds one day. There was a hole in the fence. Most of the birds were gone and two were dead.

The thieves had tried to cover their tracks by making it look like a coyote had made the hole. But surveillance footage showed someone had put a flashlight in front of the cameras. There also were no feathers or other signs of coyotes.

Around the same time, Smith Valley School Bee Manager, Chloe Unruh also wanted to visit the schools bees. She was always really excited to see them. She will never forget the first time she saw them.

“It was really awesome. I never looked inside a beehive before, I never knew what to expect. The bees were surprisingly calm. It was really interesting how much detail they put into everything.”

They were busy too, she said, full of activity, making their perfect little comb and foraging. “It was just really pretty,” Unruh said. “It is incredible how much effort and detail they put into it.”

But on this day, when she approached the hive, she knew right away that something was wrong.

Technically mass murder as a colony can have 60,000 bees. Again, the thieves tried to cover their tracks by replacing the hives with barren ones. The thieves made off with 20lbs of honey. But the real loss was the bees.

“So I was just really devastated. Why would someone do this and kill all the bees?”

Peering inside the empty hive back in January, she teared up. Banta, the Turkey Manager is also still disturbed. The theft of turkeys and killing of bees for honey left them asking deep questions.

“It was really hard to process that through my brain,” Banta said. When it happened, she cried and kept it to herself except for a select few teachers and family. “I never thought people would steal because that had never happened before. They (parents and teachers) told me that stuff just happens in life and that this is a part of it and we are going to try to find who it is.”

A police report was filed. In all, the value of all that was stolen was more than $3,000 which, according to Nevada law would make the crime a Category B Felony with up to 10 years in prison and a $10,000 fine. The thieves were never found.

“My message to the thieves is that they can come and take as many (of my birds) as they want,” said Banta. “It’s not going to bring me down because I am a strong young lady and I know how to take care of myself.”

Eventually, word got out about the thefts and the community stepped up, donating more than $2,500. That will allow the FFA Bee Program to more than double the number of hives. The Mason Valley Beekeepers sold bees to the school, donated educational classes and consultations.

“I was not surprised that some people had donated but that so many people donated,” Unruh said. “Because it is a small valley, I wasn’t expecting so many people to be so supportive. It was just really awesome!”

Now, she anticipates the school honey sales to grow and she needs labor too.

“I think just donations are good for right now. But we have a lot of those. So, maybe just helping out with making some products, extracting honey, helping out hands-on,” Unruh said. She is bottling honey which she says is much sweeter than commercial honey because the bees are foraging instead of just drinking sugar water. She makes lotions and lip balms.

Banta, the Turkey Manager, is coming back stronger too. She applied for a grant from the Future Farmers of America to start a breeding program and won $2,000. She will buy a 60-egg incubator with the money. She was also able to buy mature birds by talking to a breeder in Oregon. Someone donated a mature hen.

She sells the meat for cheaper than the grocery store and its all natural too. Things are looking up.

Until COVID, theft of poultry was rather rare according to John Monaco, former American Poultry Association President. Most losses were due to wild predators, but this incident demonstrates that humans can be predators too, leaving animals and children as their victims. With thefts more common, at least one website is offering solutions including tattooing birds.

Beehive thefts however are more than common according to retired Tulare County apiary inspector Gerry Miller.

“Beehive thefts have happened forever,” Miller said adding that the incentives for theft are high. The value of each hive is more than $200 with potentially a thousand dollars worth of honey inside and the potential for income by rent hives to orchards.

There have been many efforts over the years he says to stop thefts including branding hives to GPS trackers. None have proven successful.

The Nevada Legislature considered updating its 100-year old apiary law this year (NRS 552 Bees and Apiaries). Senate Bill 407 would have formalized hive registration, costing the industry $20 per hive, mileage costs, and imposing fines of $500 for not registering.

The current law is outdated according to Debbie Gillmore of the Mason Valley Beekeepers and funds should be used to help honey bee health. But according to the law, money from the proposed registration would go toward inspections, Agriculture Department-designated programs, and weed control. The bill does not mention funding agricultural departments to investigate thefts and protect bees and their keepers. Senate Bill 407 died much like the birds and bees of Banta and Unruh.

Ky Plaskon is an author, beekeeper, and president of the Truckee Meadows Bicycle Alliance. Subscribe to his YouTube channel for new videos.