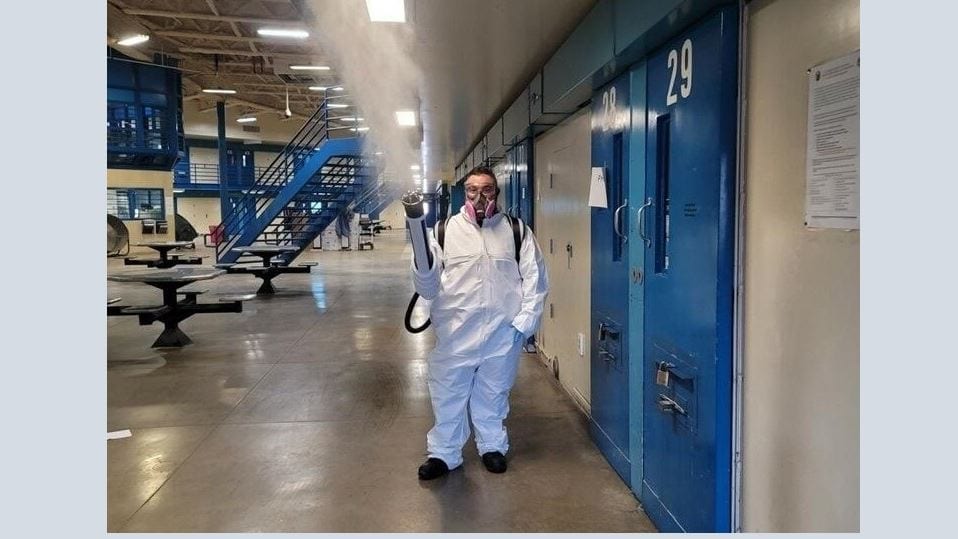 Corrections officials have turned to disinfectant foggers in an attempt to control rapid spread of the coronavirus. Here a fogger is deployed at Northern Nevada Correctional Center in Carson City. (NDOC photo.)
Share
0
FacebookTwitterPinterestLinkedinTumblrRedditWhatsappTelegramEmail

CARSON CITY–Nevada failed to keep its incarcerated population safe during the Covid-19 pandemic, according to findings by the Prison Policy Initiative, a public policy think tank focusing on the criminal justice system.

In a report released this week that graded all state correctional agencies in responding to Covid, Nevada, like 41 other states, received an F. However the report found Nevada’s response to the pandemic was singularly inadequate in some areas.

Tiana Herring and Maanas Sharma, who authored the report, said as a whole, “the nation’s response to the pandemic behind bars has been a shameful failure.”

The group looked at correctional agencies efforts to reduce prison populations, reduce infection and death rates behind bars, vaccinate the incarcerated population and address basic health needs from the time the pandemic began until July 2021.

Only 13 states have refused to implement policies to accelerate release or promote medical parole or compassionate release since the pandemic started. Nevada was one of those states.

“One of the easiest ways to reduce prison populations — especially during a pandemic — is to reduce the number of people admitted to prisons for technical violations of probation and parole (which are not crimes),” according to the report. “Yet most states, including Nevada, failed to utilize this simple tool of population reduction.”

Since March 2020 when the state was locked down to mitigate the spread of the virus, civil rights groups, prisoner advocacy organizations and lawyers have pushed Gov. Steve Sisolak to take executive action to release inmates who were serving time for nonviolent crimes and within six months of their sentencing ending.

Those pleas were ignored.

Weeks before its first confirmed covid case in May 2020, the Nevada Sentencing Commission voted against several recommendations that urged state officials, including Sisolak, to at the very least discuss how to reduce the prison population.

The Prison Policy Initiative report also said Nevada was the only state that “did not institute any changes to their medical copay policies, leaving incarcerated people to pay for health services.”

The Nevada Health Response database shows there have been 5,613 confirmed Covid cases within the Nevada Department of Corrections since the pandemic began.

Cases began to skyrocket in fall of 2020 despite prisoner advocacy groups warning an outbreak was imminent. According to the database, 49 people who are incarcerated have died as well as three staff members.

The authors indicated that failure to update Covid numbers has been a national problem that adds to the confusion, hinders mitigation efforts and keeps families of the incarcerated, who often rely on the data especially if visitations are suspended, in the dark.

“Despite the critical nature of COVID-19 data, the vast majority of states are failing to release comprehensive data, and many are no longer updating the data dashboards on their websites,” the report notes.

While the report didn’t take into account staff vaccination rates, prisoner advocacy groups and families have pointed to low numbers being responsible for the ongoing spread. Only 55% of staff, or 1,332 out of 2,427 employees, were vaccinated as of late August.

According to the Prison Policy Initiative, 42 states received a failing grade. Only California and New Jersey received a C.

“While some states performed well on one or two of these criteria, no state’s response to Covid-19 in prison has been sufficient,” the authors wrote. “The highest letter grade awarded was a ‘C,’ and most states completely failed to protect incarcerated people.”