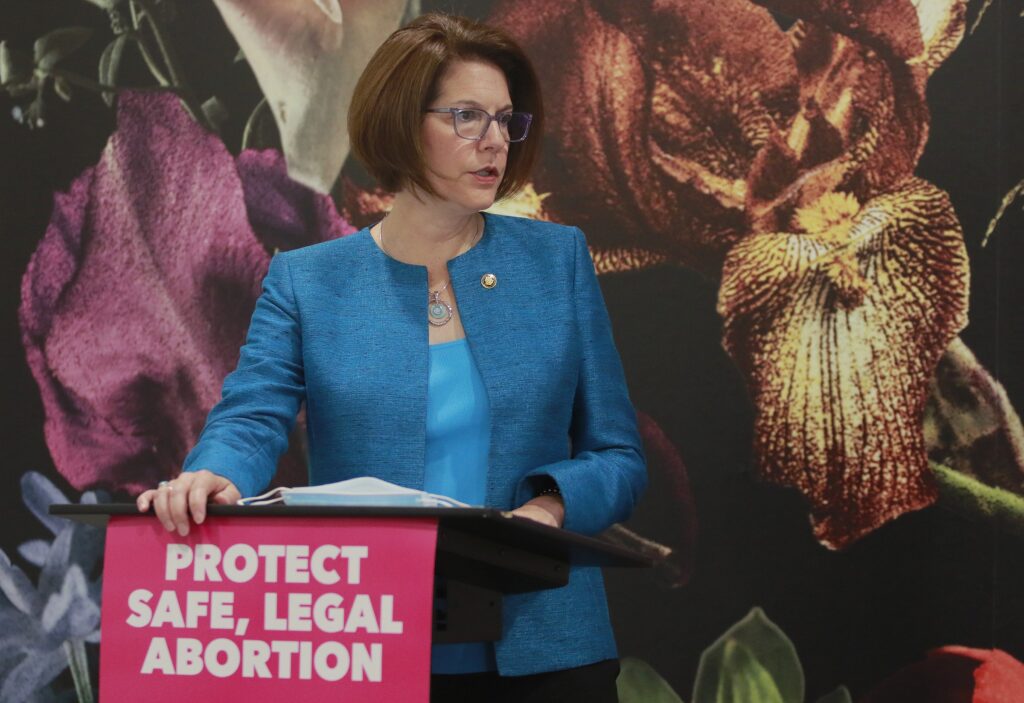 LAS VEGAS–U.S. Sen. Catherine Cortez Masto said Thursday “the Republican party in general, including the Republicans who are running against me, are extreme and they are going to do everything that they can to continue to undermine Roe v. Wade. I’ve watched it over the years.”

The condemnation came moments after Cortez Masto raised the specter at a news conference in Las Vegas of enlisting Republicans, especially women, to close the partisan gap on the Women’s Health Protection Act, which would codify a right to abortion nationwide and which Speaker Nancy Pelosi said Thursday will be brought up in the House next week.

“We know there are some women on the other side of the aisle who have supported women’s reproductive freedom. But we would have to get 60 votes,” Cortez Masto said in reference to an anticipated Senate Republican filibuster.

Cortez Masto supports a “talking filibuster” in which members orate about their opposition to legislation. Frequently, filibuster speech amounts to members reading unrelated material to an empty chamber.

“So the question that we are looking at now is what type of legislation we could move forward to put additional protections in place or what we could do through other means to pass this legislation, and we’re still looking at the process right now,” she said.

U.S. Sen. Kyrsten Sinema (D-AZ) is a co-sponsor of the Women’s Health Protection Act, and her Republican colleagues Lisa Murkowski of Alaska, and Susan Collins of Maine, are known to support abortion rights.

“If they are going to oppose this, then I want Mitch McConnell or any Republican opposing it to  stand on the floor of the Senate telling women and families across the country why they oppose reproductive freedom rights for women,” Cortez Masto said.

The Act, which would add a federal abortion statute, has languished for years, but is on a fast track since Texas effectively outlawed abortions by restricting them to pregnancies of no more than six weeks.

“In that first week, we had a patient hop on a plane and fly into Las Vegas to our health center,” said Adrienne Mansanares, chief experience officer for Planned Parenthood of the Rocky Mountains. “This care is going to happen.”

The U.S. Supreme Court rejected a procedural motion to stay the Texas law, which awards $10,000 to anyone who brings a successful lawsuit against an abortion provider or other facilitating party.  A Texas court is scheduled next month to hear a federal injunction filed by the Biden administration.

The law prohibits abortion “before many women even know they are pregnant,” Cortez Masto noted. “It has the potential to create a whole industry of vigilantism.”

She said a pending case in Mississippi, Dobbs v. Jackson Women’s Health, was “specifically chosen by anti-choice activists to help strike down Roe v. Wade, and she says the U.S. Supreme Court has given “every signal that it is willing to do those activists’ bidding.”

Cortez Masto said abortion would be illegal in 19 states if the Supreme Court overturned Roe v. Wade. The average distance a woman must travel to obtain an abortion would “jump from 25 to 279 miles,” she said.

The new mother of a two-month old son said she took a pregnancy test on the first day a positive result could be detected, in excited anticipation of learning the results.

“On the earliest day, I was there,” she said. “The day I got the positive pregnancy test, I was five weeks pregnant.”

She says it took another month to see a doctor and several weeks more for tests to confirm a healthy pregnancy.

Cortez Masto said Nevadans “can’t take for granted what we’ve done in this state,” by codifying abortion, which can only be made illegal through a vote of the people. “The extreme Republicans have been working very hard to take away our rights… They should be held accountable and they should be asked these questions.”