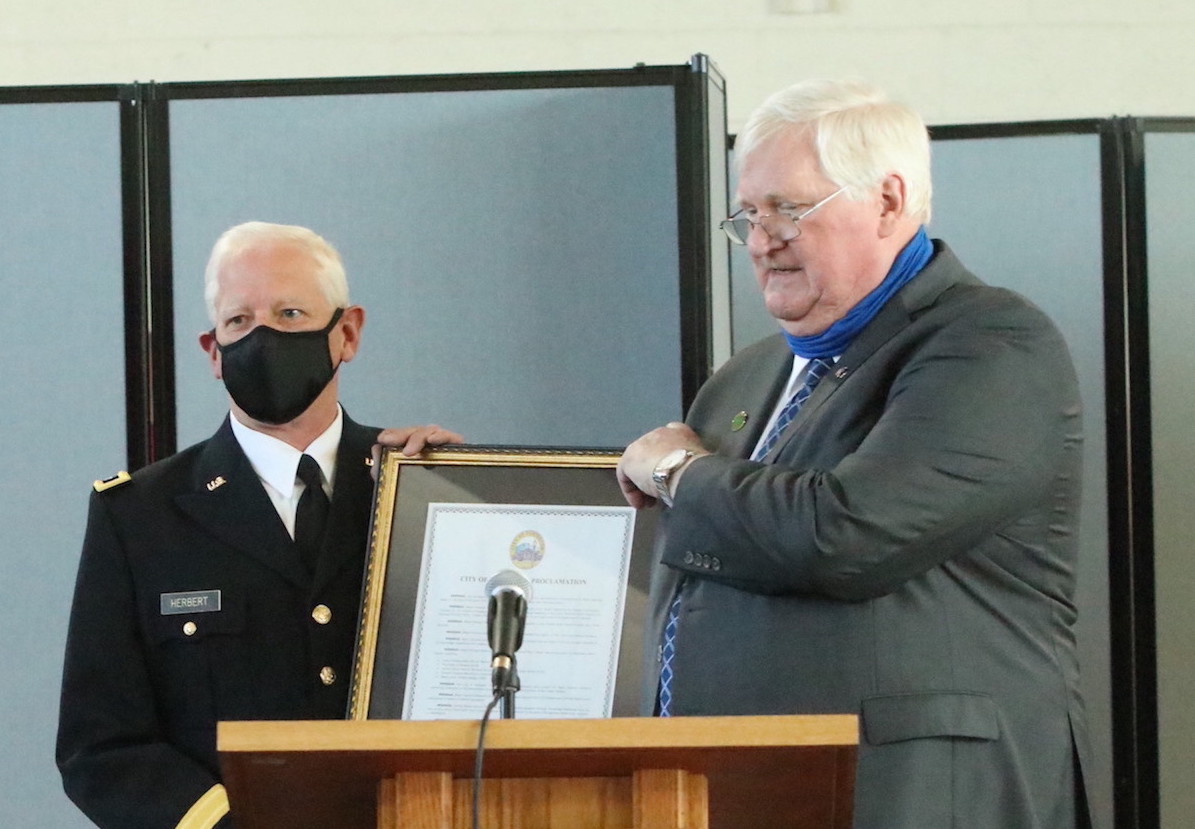 LAS VEGAS–Tributes are pouring in for Robert Herbert, a former policy adviser to Sen. Harry Reid and retired major general in the Nevada Army National Guard.

Herbert, 64, died in a single car crash Friday night in California. His services will be conducted at the Las Vegas Readiness Center on Saturday at 3 p.m.

According to the Nevada Guard, Herbert served in his civilian occupation as the senior policy adviser and director of appropriations for Reid. He managed all 12 federal spending bills for the senator and advised Reid on transportation, defense, veterans and homeland security matters.

Herbert served in Reid’s office from 1991 to 2018 and had advised the senator on military issues throughout Nevada. After leaving the senator’s office, he was senior vice president for the Porter Group, a bipartisan government affairs and advocacy firm led by former U.S. Rep. Jon Porter of Las Vegas.

During his career, Herbert attended a number of military schools. He also received a master’s in public administration from George Washington University and a master of science in national security strategy from the National War College. As a pilot, he accumulated more than 7,000 flight hours on a wide range of aircraft and received his Army Master Aviator pilot wings.

Reid tweeted his condolences after learning about the crash.

“Bob’s leadership and expertise on transportation, energy and national security helped transform Nevada and the country,” Reid said. “His work was recently honored in Yerington where the city hall bears his name.”

Earlier this year in late March, the city of Yerington acquired the National Guard armory, and at a dedication ceremony, the new city hall was named in Herbert’s honor.

Yerington Mayor John Garry said Monday he was shaken to learn of the news. He said the Nevada Army National Guard suggested the armory be named after Herbert for the work he has done on behalf of the military.

“As I reflect, I am glad to have a dedication in his honor,” said Garry, adding he was looking forward to developing a deep friendship with Herbert. “At the end of our city council meeting (today), we had a moment of silence in his honor.”

“Maj. Gen. Herbert was an exceptional soldier, long-time advocate for the Nevada National Guard, and dear friend,” Berry said in a statement. “It’s not an exaggeration to say he was the most influential soldier in advancing Nevada Army and Air National Guard policy and initiatives over the course of the past three decades.”

Berry said at the Yerington ceremony Herbert had a hand in modernizing the state’s armories.

“Every National Guard installation in the state was either built, replaced or refurbished including the Yerington armory during the 20-year period while General Herbert worked in Reid’s office,” Berry said.

After the ceremony, Herbert said the Nevada Guard and communities have a special relationship.

No one knew Herbert as closely as retired Brig. Gen. Randall Sayre. Their paths first crossed when both flew helicopters at Fort Ord, Calif., in the late 1970s. Sayre, who had attended the University of Nevada, Reno and was promoted a second lieutenant after completing ROTC, was first assigned to the Republic of Korea after flight school.

Herbert, who grew up in the Midwest, enlisted after high school in 1975, attended flight school and became a warrant officer. His first assignment was flying along the border separating West from East Germany. After their overseas assignments, both pilots returned stateside to Fort Ord.

“Bob and I came from different parts of the United States,” Sayre said. “He came out of Wisconsin, and of course, I came out of Nevada.”

“We struck up a friendship,” Sayre said, also pointing out each pilot flew different helicopters but had similar interests.

Over time their friendship grew, and Sayre called it more like a sibling relationship between brothers.

After Sayre left active duty and returned to Nevada, he joined the National Guard. Sayre eventually persuaded Herbert to move to Nevada after his initial enlistment and become an active-duty technician as a full-time test pilot.

“Bob was the type of guy who wanted to get the most out of life,” Sayre said.

Herbert took a risk coming to the Nevada Guard, Sayre said, because of career change and advancements that he could make. Sayre said that risk paid off hugely for him.

Sayre watched Herbert’s progression in the Nevada Army National Guard. In addition to working full-time for the Nevada Guard, Herbert attended college classes at night to earn his degree.

“He was always a guy who looked across the landscape and decided where the opportunities were,” Sayre said, adding his friend wondered where he could contribute the most. “He put in the work to get there.”

Sayre said Herbert worked himself up through the rank of colonel and then brigadier general. Herbert saw opportunities in regards to National Guard Bureau, and there was a transfer there.

“Low and behold,” Sayre said, “down the road, here he is (with a) senate confirmation and promotion to major general.”

Sayre said both he and Herbert loved to ride motorcycles and drive cars and managed parallel careers with Herbert moving to the nation’s capital and Sayre working for the Nevada Gaming Control Board.

In 1991, Herbert began working for Reid’s office, first on a Congressional fellowship for full-time military personnel, and later as an full-time civilian aide while completing his military obligations one weekend a month as a drilling reservist.

Retired Brig. Gen. William Burks, the state’s former adjutant general, said he began to know Herbert when both dealt with military issues for Nevada.  Herbert’s work with the senator’s office procured additional dollars for equipment and new buildings for the Nevada National Guard.

Burks said millions of dollars were earmarked to build a new Las Vegas Readiness Center near the raceway and field maintenance shop for the Army Guard. He also said the Nevada Air Guard received its share of funding for a new intelligence center and fire station.

“Herbert had a good team as well to utilize infrastructure dollars,” Burks added.

Every time Burks traveled to Washington, D.C., on military business, he would contact Herbert to meet for dinner and discuss issues affecting Nevada. As adjutant general, Burks also had a special privilege. He recommended Herbert for promotion to brigadier and then major general.

“He did so much for Nevada,” Burks said.

“He (Herbert) was behind the scenes when Strike U became the Naval Strike and Air Warfare Center (in the mid-1990s),” said Zip Upham, spokesman for NAS Fallon.

Now, it’s called the Naval Aviation Warfighting Development Center. Fallon also increased its naval presence for air fighting during the 1995 Base Realignment and Closure.  Upham said the base saw improvements over the year to include programs for the aviation training as well as a Warrior Fitness Center for the sailors.

Likewise, Brig. Gen. Michael Hanifan, the state’s assistant adjutant general, said Herbert’s work with Reid led to the Nevada Army National Guard receiving CH-47 Chinook and Black Hawk helicopters. Herbert, according to Hanifan, helped save some of the military’s assets in Nevada that were selected for either closure or realignment in 2005.

Hanifan said Herbert has had a big influence on the Guard by ensuring Reid was kept apprised of current policy.

“All of our new armories we got were part of his legacy, and he had an official part in all of these,” Hanifan said. “He was very involved we improved on our infrastructure to make the Nevada Army Guard relevant.”

Hanifan also said Herbert spent time on the military side of his career as a special assistant to the Chief, National Guard Bureau from May 2015 to August 2018.

“He will leave a lasting legacy,” Hanifan said of his friend.

Both soldiers, coincidentally, received their promotions to brigadier general at the same time.

A love for the Guard

Another longtime friend, former pilot and retired Chief Warrant 5 Mike Billows, said Herbert loved to fly and had a love for the Nevada National Guard.

“He was a very good leader,” Billows recalled. “He would let his technical people free to make decisions.”

At Reid’s office, Billows said Herbert gained a good reputation. Whatever Herbert did made an impact on the National Guard.

“Bob came over (from California) to run our operations section at the Army Aviation Support Facility, and he worked as an instructor pilot,” Billows said. “Bob was a type of guy for action. He had a great vision for the facility.”

During their careers together, Billows said they conducted several missions together including one near Fallon involving a cruise missile test. Both Billows and Herbert both flew the CH-54 Skycrane heavy-lift helicopter.

“He took care of the troops,” Billows said. “He wouldn’t let outside work interfere with the mission.”

Services to be held

A funeral service is being planned for a date to be determined at Arlington National Cemetery in Virginia. An obituary on Herbert is available here: https://everloved.com/life-of/robert-herbert/obituary.