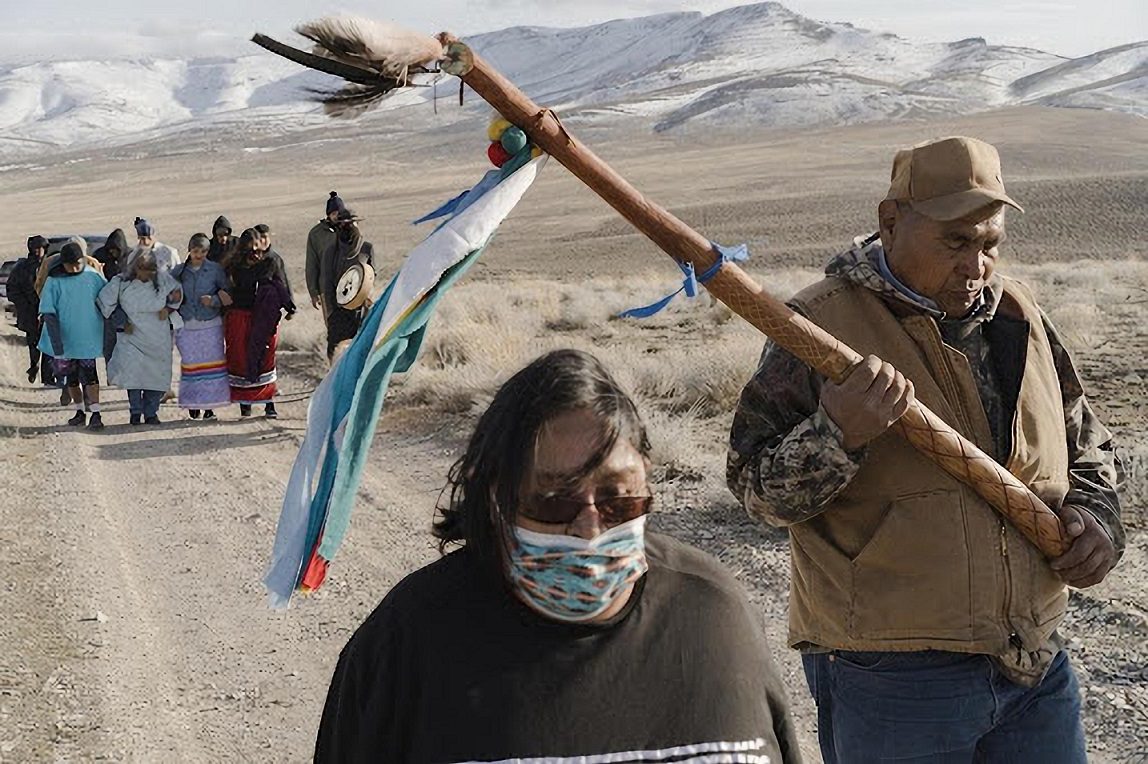 RENO–The Bureau of Land Management (BLM) has fined two people involved in the Protect Thacker Pass protest camp nearly $50,000 for alleged violations of public land regulations. One of those fined is an attorney representing Tribes in a lawsuit against the agency.

The activists are calling it “blatant harassment” and “an attempt to cover up BLM’s violations of the law and … of Native American religious rights.”

Will Falk and Max Wilbert launched the protest camp Jan. 15 against the proposed Lithium Nevada Corporation’s Thacker Pass mine about 35 miles south of the Oregon-Nevada border. They are facing allegations of trespass related to the construction of temporary latrines and a plywood windbreak.

According to BLM spokesperson Heather O’Hanlon, BLM initiated trespass proceedings against Falk and Wilbert for unauthorized use, occupancy or development of public lands in violation of the Federal Land Policy and Management Act of 1976.

“We gave them the opportunity to present evidence or information to show they were not in trespass or effect a settlement for trespass damages,” O’Hanlon said. “Although three structures were removed, two unauthorized latrines remained in the area described in the notice sent to them Aug. 5. Failure to remove those structures resulted in the Sept. 15 Trespass Decision.”

She noted that Falk and Wilbert can appeal the decision to the Interior Board of Land Appeals.

Falk is an attorney and is representing the Reno-Sparks Indian Colony and a native organization called Atsa koodakuh wyh Nuwu (People of Red Mountain) in a court case against the BLM. He said the trespass allegations appear to be retaliation for his involvement in the lawsuit.

On July 19, Falk and his co-counsel, Terry Lodge, filed a motion to intervene in an existing lawsuit against the BLM, claiming the agency violated the National Historic Preservation Act by failing to properly consult with Tribes.

The original case was brought by four environmental groups and was already combined with a separate suit brought by a rancher near the project area.

After the Tribes’ request to intervene was granted, Falk quickly filed for a preliminary injunction to stop the BLM from permitting—and Lithium Nevada from hiring—an archaeological contractor to survey the proposed mine site. Before the mine can be built an Historic Properties Treatment Plan (HPTP) must be made and an archaeological survey completed.

Judge Du on Sept. 3 denied the Tribes’ request for a preliminary injunction.

The survey is expected to include the digging of “between two and 25 holes by hand at each of the 21 precontact historic sites and digging seven mechanical trenches (presumably by backhoe) at some of the sites—of up to a few meters deep and 40 meters long.”

The BLM must issue a permit for the survey under the Archaeological Resources Protection Act. It

“BLM Winnemucca’s response to being accused of failing to adequately consult with Native American Tribes is to fine the attorney bringing those accusations nearly $50,000,” Falk said, noting that the trespass notice was first delivered on Aug. 5, eight days after U.S. District Court Judge Miranda Du granted intervention to his clients.

Falk alleged the fine may also violate the religious rights of Native Americans. He said three structures referenced in the Aug. 5 letter from the BLM were removed in what he described as a “demonstration of good faith.” But latrines remained in place.

Falk and Wilbert said that they have explained to BLM officials that the latrines are for elders participating in ceremonies and asked for permits. They said on July 24, BLM Law Enforcement Ranger Blane Parnell informed Wilbert that a permit would be required for temporary outhouses.

Wilbert claimed to have responded both verbally and in writing requesting a permit application.

Falk said he wrote on Aug. 20 to Kathleen Rehberg, a BLM field manager, asking for guidance in obtaining a special use permit or to work out other acceptable arrangements so that people visiting Thacker Pass for ceremony could use the bathroom but that his request was ignored.

The BLM told This Is Reno that it had “no comment at this time” on the protesters seeking special use permits for latrines.

“The Bureau of Land Management is ignoring our permit requests and fining us for maintaining sanitation and protection (sic) religious freedom,” Wilbert said. “The same office fast-tracked the permit for Lithium Nevada to destroy thousands of acres of wildlife habitat and sacred native sites. It’s completely absurd for them to claim they are ‘protecting public lands’ with this action.”

Lodge said the fines from the BLM have all the hallmarks of a Strategic Lawsuit Against Public Participation (SLAPP) lawsuit.

“BLM isn’t at all subtle,” Lodge said. “They’re burdening a citizen intervention operating on a shoestring budget with the prospects of having to ward off a diversionary attack. This gambit comes just weeks before the most labor-intensive part of this lawsuit begins, where our clients will have to assemble the evidence of BLM’s assault on the public’s right to know about and oppose the Lithium Americas permit.”