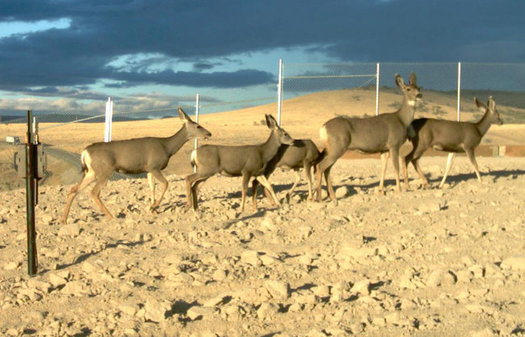 Nevada's mule deer population can migrate up to 100 miles. Many use overpasses built by the state in spots where they attempt to cross each year. (Nevada DOT)
Share
0
FacebookTwitterPinterestLinkedinTumblrRedditWhatsappTelegramEmail

CARSON CITY – Gov. Steve Sisolak on Monday signed an executive order designed to conserve, restore and protect wildlife habitat and migration corridors on the state’s public lands. The order establishes the creation of the Nevada Habitat Conservation Framework (HCF) through the Nevada Department of Wildlife.

The prescribed goals of the framework are to conserve and propagate diverse and productive wildlife habitats, address priority threats to key habitats, and maintain connectivity of habitats and corridors. Within the HCF, NDOW will also create a Sagebrush Habitat Plan and Wildlife Connectivity Plan.

The framework and each of the included plans must be completed by Dec. 31, 2023.

“Nevada’s wild landscapes provide the clear air, clean water and open space that are integral to a healthy economy and our way of life,” Gov. Sisolak said. “Whether it is mule deer or desert tortoises no animal thrives without a healthy ecosystem, and this executive order puts a crucial focus on the corridors through which wildlife migrate to survive.”

In a statement announcing the order, the governor acknowledged the impacts of climate change, invasive species, wildfire and habitat fragmentation—through fencing, highways and other development—as threats to wildlife habitat in the state.

Tony Wasley, director of NDOW, told Public News Service earlier this year that an additional challenge for Nevada has been the large amount of the state that’s controlled by federal agencies—about 85%–and dated federal resource management plans, which can be two decades old. Under the governor’s order, the new framework and accompanying plans would need to be reviewed and updated every two years.

New data will also help stakeholders in developing and maintaining their plans.

Researchers in Montana this month announced a project to map fences across the west to better understand how they affect animals and their migratory paths. Greater insight into the migration routes animals are using was also made available earlier this year through a study by researchers at the Theodore Roosevelt Conservation Partnership.

NDOW intends to work with a variety of stakeholders to create the HCF and plans, include conservationists, ranchers, industry representatives, local and federal agencies—such as the Nevada Department of Transportation—and other interested parties.