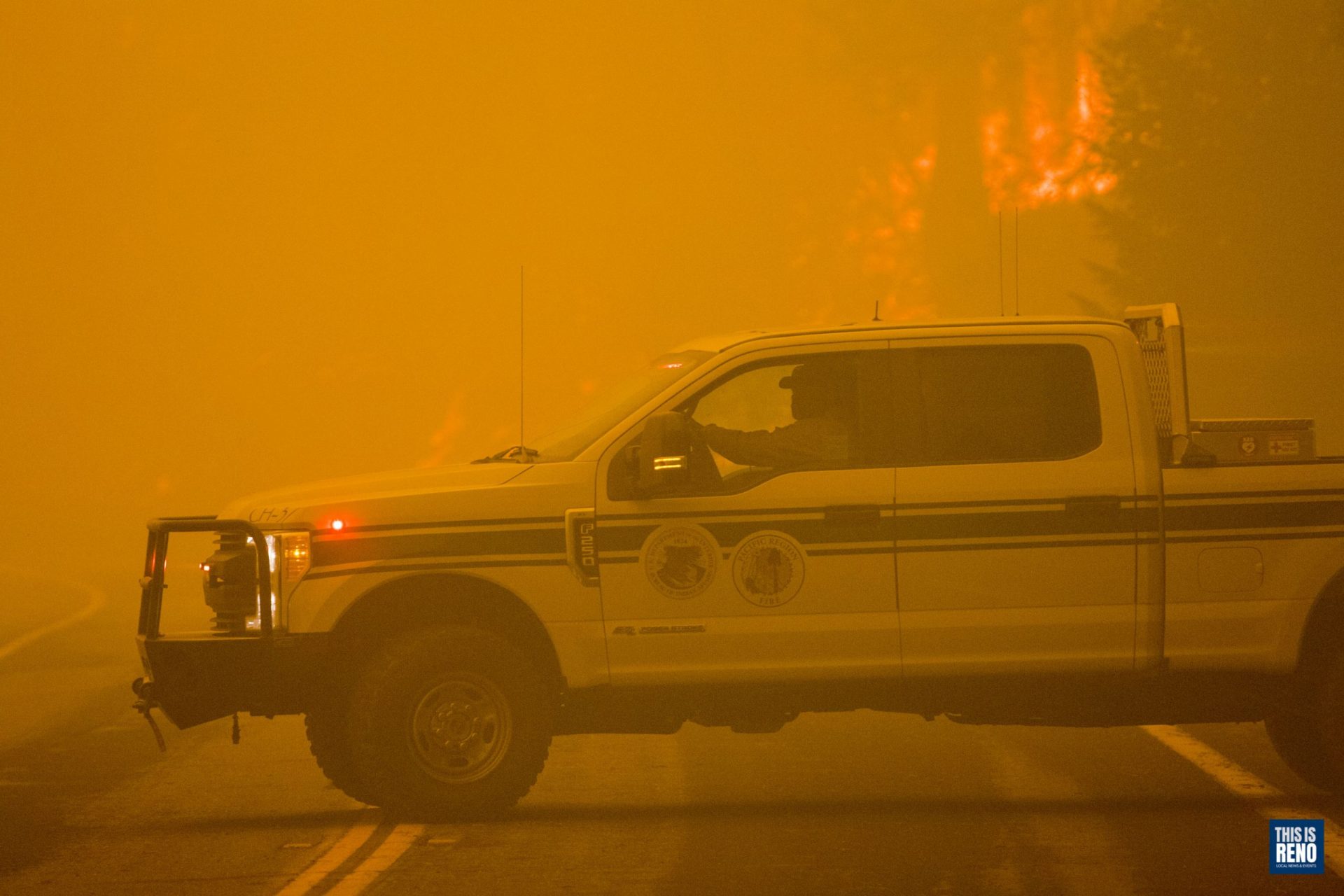 A U.S. Forest Service official blocks a road while the Dixie Fire burns behind him on July 24, 2021 in Plumas County, Calif. Image: Ty O'Neil / This Is Reno
Share
0
FacebookTwitterPinterestLinkedinTumblrRedditWhatsappTelegramEmail

VALLEJO, Calif.–Wildfires in California have forced the closure of nine National Forests according to officials in the U.S. Forest Service’s Pacific Southwest Region office. Portions of the Pacific Crest Trail and Tahoe Rim Trail have also been closed to users.

USFS Officials on Wednesday closed access to the Eldorado National Forest through Sept. 30.

The closure of the Lake Tahoe Basin Management Unit followed on Thursday and includes additional backcountry and wilderness areas including Desolation Wilderness, Meiss Country, Barker Pass and McKinney/Rubicon, along with a number of roads leading into the backcountry. The LTMBU closures continue through Sept. 19.

The additional closures will be effective at 11:59 p.m. Aug. 22 through Sept. 6 and affect the following forests:

Fines and imprisonment are possible for people who violate the order.

“Fires are running very quickly due to the drought conditions, dry fuels, and winds. This makes initial attack and containment very difficult and is even more challenging with strained resources who are battling more than 100 large fires across the country,” said Regional Forester Jennifer Eberlien. “We do not take this decision lightly and understand how this impacts people who enjoy recreating on the National Forests.”

Eberlien added that the closures intended to ensure public safety as well as that of firefighters working in the region, and to reduce the potential for new fire starts.

Officials at the Tahoe Rim Trail Association, which manages the 165-mile trail around the rim of the Lake Tahoe Basin, said their trail was closed from just south of Barker Pass on the west side of Lake Tahoe to the Big Meadow Trailhead, located on Highway 89.

The Pacific Crest Trail Association also issued a closure for portions of the PCT, which runs concurrent with the TRT from Meiss Meadow to just north of Barker Pass. The PCTA said its trail is closed from Blue Lakes Road to Tahoe City.

The USFS reports more than 6,500 fires in California this year have burned more than 1.2 million acres.

The Caldor Fire southwest of Lake Tahoe in Eldorado County has reached more than 68,000 acres in size and is burning northeast toward the western edge of Desolation Wilderness. It has forced evacuations in dozens of areas and has proven difficult to contain due to steep terrain and heavy timber.

Read the USFS’s full statement on the closures at https://www.fs.usda.gov/detail/r5/news-events/?cid=FSEPRD945706.

Thermal cameras installed by ALERTWildfire to help firefighters see through...