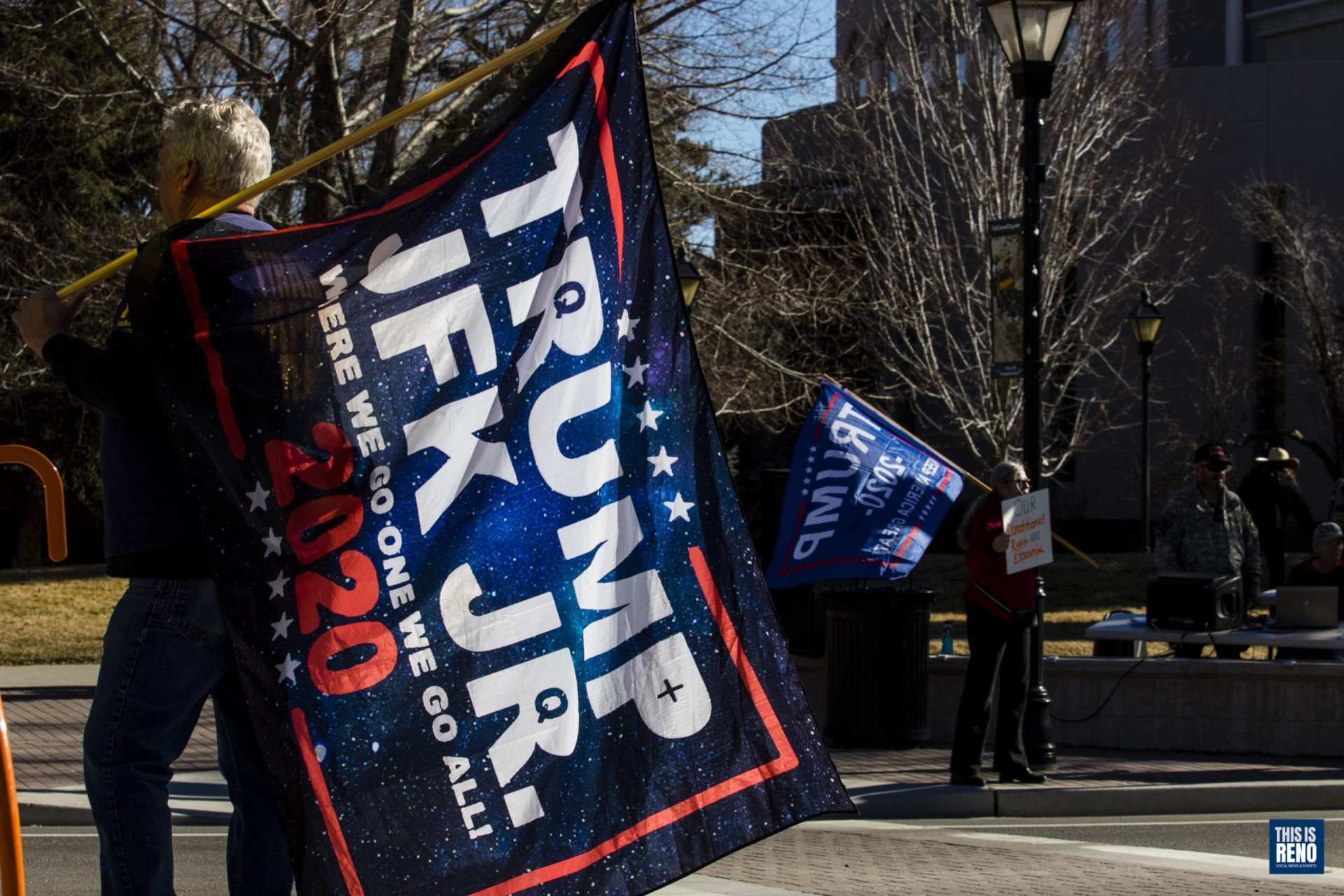 A protester carries a QAnon flag promoting the false belief that John F. Kennedy Jr. is alive and would return in 2020 to support Trump's second presidential campaign. JFK Jr. died in a plane crash in July 1999. Image: Ty O'Neil / This Is Reno
Share
0
FacebookTwitterPinterestLinkedinTumblrRedditWhatsappTelegramEmail

LAS VEGAS (AP) — A group that espouses the fringe conspiracy theory known as QAnon plans to hold a conference at a convention center owned by one of Nevada’s largest hotel-casino companies in late October.

The Las Vegas Review-Journal reports that Patriot Voice is selling tickets for a three-day event at Caesars Forum, a convention space near the Las Vegas Strip. Guests who pay from $650 to $3,000 will hear from former national security adviser Michael Flynn, 8kun owner Jim Watkins and former Assemblyman Jim Marchant, who is running for Nevada secretary of state after spreading claims of voter fraud and suing to overturn the 2020 election results.

Judges in every Nevada case dismissed the election challenges that claimed voter fraud and Nevada’s current secretary of state, a Republican, defended the results as reliable and accurate.

QAnon is a conspiracy theory that revolves around the baseless belief that satanic pedophiles, child sex traffickers and cannibals are in collusion with the so-called “deep state” and will be uncovered at a future reckoning that followers of the theory call a “Great Awakening.” Adherents migrated from internet forums to mainstream politics last year. Their signs have been seen regularly at rallies for former President Donald Trump and some are facing trial for their role in the Jan. 6 storming of the U.S. Capitol.

The “Patriot Double Down” event in Las Vegas is being billed as a “Great Awakening Weekend” and its registration page refers to COVID-19 as a “plandemic” — a term used to suggest the virus was manufactured and its severity exaggerated. It commends Caesars for hosting the event.

“Events taking place in our facilities are not indicative of the company’s views, nor are they an endorsement of any group or organization,” she said. “We require all of our guests to comply with local laws and mandates, including the current indoor mask mandate.”