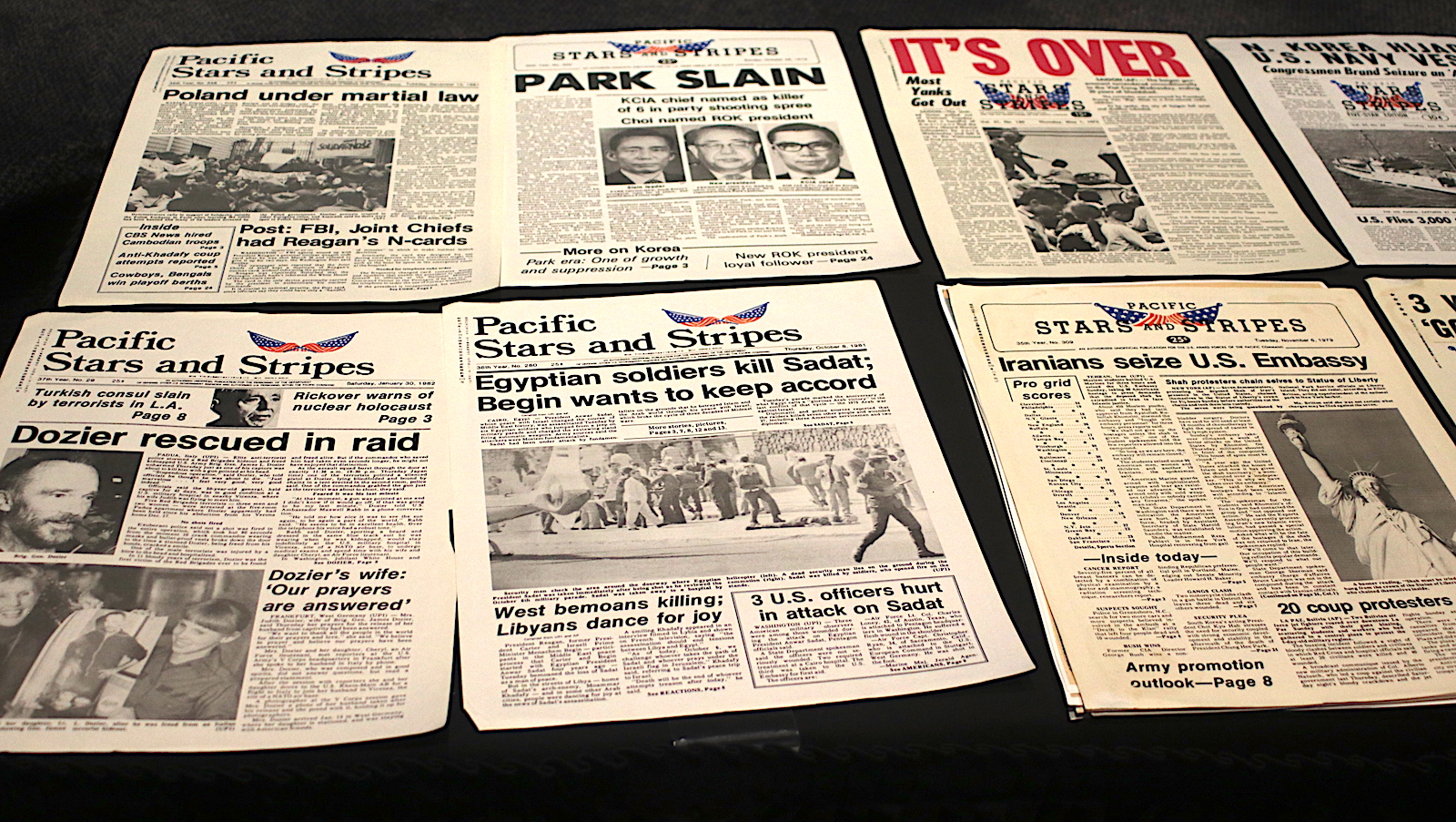 The Stars and Stripes newspaper has been a primary source of news for the military serving overseas. Steve Ranson / LVN
Share
0
FacebookTwitterPinterestLinkedinTumblrRedditWhatsappTelegramEmail

Stars and Stripes has served the military since the Civil War

RENO–Different issues of Stars and Stripes, an independent military newspaper distributed to the troops overseas, covered several tables in two rows. News from various wars and stateside tragedies blared out with big headlines and snappy subheads.

A headline announcing the capture of the Navy’s USS Pueblo in late January 1968 grabbed J.R. Stafford’s attention when he surveyed the various newspapers. Near the time when the bloody Tet Offensive began in Vietnam in early 1968, North Korean forces captured the naval intelligence’s spy ship. Stafford is president of the Sierra Nevada Chapter 989 Vietnam Veterans of America

“I was doing duty at Da Nang Air Base,” said Stafford, who recently attended the 160th birthday at the National Auto Museum in Reno for Stars and Stripes. “We had heard word of it (the Pueblo capture) before it hit the newspapers.”

Other headlines called out to Stafford the assassinations of both Bobby and John F. Kennedy. He said Stars and Stripes became the primary news source for military personnel serving overseas.

During the 1960s, Stafford, who served in U.S. Air Force at the time, said he relied on the newspaper for the sports from the San Francisco Bay Area, and he enjoyed the comics.

Fallon’s Jim Falk, who was assigned to the Pacific Stars and Stripes in the 1960s for three years, attended the afternoon event. One of the memories the Navy journalist noted was seeing the newspaper’s headlines pop up during a press run. Once Falk completed his assignment and left the military, Stars and Stripes became tucked away in his thoughts.

“I don’t check out the paper anymore,” Falk said. “I left there and went on to something else.”

Falk, though, said top-notch journalists worked at the newspaper.

Former Stars and Stripes reporter Fred Hinners spent 18 months with the newspaper in Europe. Hinners, who had enlisted in the Army after graduating from the University of Nevada, Reno’s journalism program in 1972, said being assigned to the newspaper was rewarding.

“I thought I had died and gone to heaven,” the Reno resident said with a grin. “Otherwise, I would’ve been sitting around with an infantry unit.”

Hinners’ beat was Berlin, an international city noted as a hub for the Cold War.

“I got to see the stark contrast,” Hinners said of the two cities, one side controlled by the Allies —  American, British and French — and the other half by the Soviets. “As long as you were wearing a uniform, you could still go to East Berlin. I saw the sharp contrast. It didn’t look like there were a lot of happy troops over there.”

Hinners said reporting for Stars and Strips was his first full-time job in journalism, and that experience led to him working as a public affairs officer for various state agencies.

For a year-and-a-half, Hinners covered many major news events. During one news conference in the 1970s, Bo Calloway, the Secretary of the Army, spoke to the numerous reporters, but after the conference, Hinners said Calloway asked him if he needed additional information.

Brian S. Brooks, who served in various editorial roles with newspapers in Memphis, Tennessee, and Columbia, Missouri, spent several years with the Stars and Stripes from 1997-1999 during the military campaigns in Bosnia and Kosovo. He told a story of how Jesse Jackson successfully negotiated for the release of three captured U.S. soldiers during March 1999. When Jackson was working to gain the soldiers’ release, Brooks promised division headquarters the newspaper wouldn’t release the story without permission for fear of putting the soldiers in danger.

“Our reporter had the scoop, and we knew it would be a great story,” Brooks said.

Brooks also received a telephone call from Gen. Wesley Clark, Supreme Allied Commander Europe of NATO, but he told the general the story would only be released with permission.

“We missed the scoop on the best story of the year, but I would do it again,” Brooks said.

Brooks also played a news program on the dangerous delivery of Stars and Stripes, which is distributed around the world to military installations.

“The only way to get news to the troops is with a printed paper,” Brooks said.

Stars and Stripes literally dodged a bullet when it faced a shutdown in 2020. Earlier in the year, the Department of Defense proposed cutting the newspaper’s $15.5 million budget and ceasing operations. In September, former President Donald Trump, though, tweeted the Stars and Stripes would receive its funding and continue publishing.

During the birthday celebration, professor Dr. Doug Mishler from the University of Nevada, Reno, portrayed noted war correspondent Ernie Pyle, who was killed in April 1945 on a Japanese-held island. Pyle, born in Dana, Indiana, became one of the most recognizable war correspondents who reported from the battlefields of Europe and the Pacific.

One of Pyle’s submissions noted how soldiers change because of war.

“The most vivid change was the casual and workshop manner in which they talked about killing. They had made the psychological transition from their normal belief that taking human life was sinful, over to a new professional outlook where killing was a craft. No longer was there anything morally wrong about killing. In fact, it was an admirable thing.”