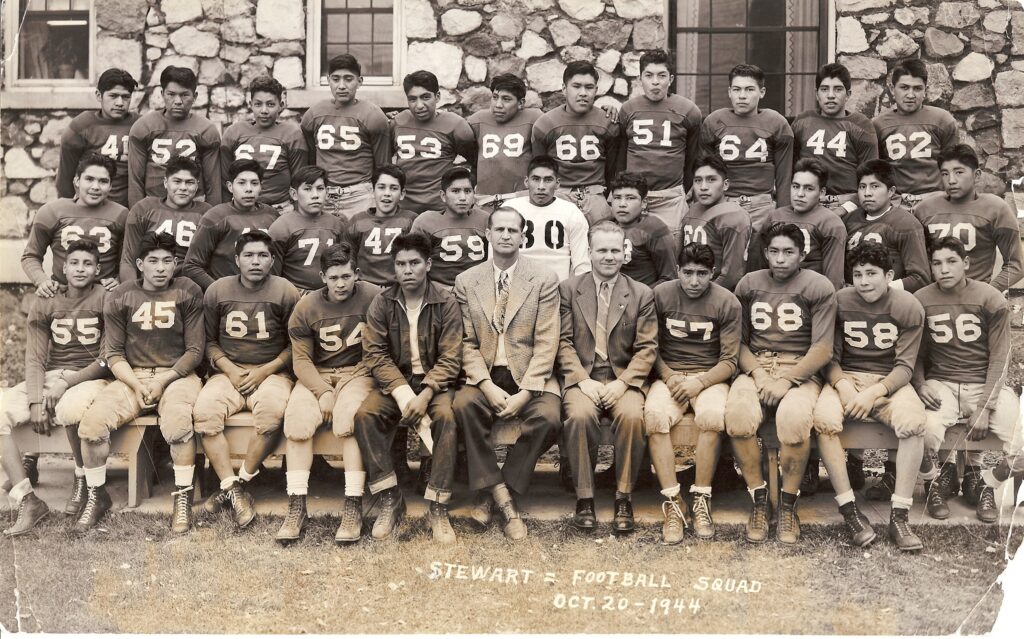 Sen. Elizabeth Warren (D-Mass.) and Rep. Sharice Davids (D-Kansas) sent a request this month for the government to set up “culturally appropriate supports” for the trauma that Native American communities may experience as the federal government begins to investigate the painful history of these schools.

That support could include creating a crisis hotline or offering counseling services. Nineteen other members of Congress signed on to the letter to leaders of the Indian Health Service, Interior Department, and Department of Health and Human Services.

At issue are years of trauma from the federal government’s push, starting in the late 1800s, to remove hundreds of thousands of Native American children from their communities.

Interior Secretary Deb Haaland has directed her agency to investigate the painful chapter of U.S. history. That probe will include attempting to identify the children who attended, as well as finding records of cemeteries or burial sites connected with the schools that may contain unidentified human remains.

As the investigation unfolds, the 21 members of Congress want the federal government to do more to aid Native American communities in processing the probe’s findings.

“The legacy of these policies continues to impact Native communities through intergenerational trauma, grief over the loss of children who never returned, cycles of violence and abuse, disappearance, health disparities, substance abuse, premature deaths, despair, and additional undocumented psychological trauma,” the lawmakers wrote in their letter.

Specifically, they want to see the Indian Health Service work with other agencies to support survivors, their families and their communities as the investigation “will inevitably shed light on extremely troubling episodes in our nation’s history.”

“The first step we need to take is caring for our boarding school survivors,” said Deborah Parker, a member of the Tulalip Tribes and the Native American Boarding School Healing Coalition’s director of policy and advocacy.

Parker added that she’s grateful the lawmakers on the letter “have recognized the importance and urgency of putting in place trauma-informed supports for our American Indian, Alaska Native and Native Hawaiian relatives.”

The Indian Health Service is reviewing the lawmakers’ request and is discussing next steps, according to a statement from an agency spokesperson.

“The IHS acknowledges the role that trauma, resulting from violence, victimization, colonization, and systemic racism plays in the lives of American Indian and Alaska Native populations, specifically Native youth who are 2.5 times more likely to experience trauma compared to their non-Native peers,” the agency said in the statement.

The Interior Department plans to begin tribal consultation in the late fall to discuss how best to share sensitive information and protect grave sites and sacred burial traditions, an agency spokesperson told States Newsroom. Officials say they are working on compiling decades of files and records for the project, so they can identify available and missing information.

The scope of that work is significant: The federal government conducted a large-scale drive over nearly a century to assimilate hundreds of thousands of Native American children through boarding schools that separated children from their families and culture.

Students had to hand over their belongings, wear uniforms, cut off their braids, adopt new names, and abandon their languages and cultural practices.

The children studied English, memorized the names of U.S. presidents, and worked on the school grounds or on assignments in neighboring towns. Disease and poor health care ravaged some schools, and in some cases, the children never returned home.

The federal government operated 25 federal off-reservation boarding schools — starting in the 1800s and continuing through the 1970s. There were more than 300 other schools run by religious groups with support from the government.

Haaland, a former member of Congress from New Mexico, is the nation’s first Native American Cabinet secretary and an enrolled member of the Pueblo of Laguna. She tasked the Interior Department in June with investigating the legacy of the schools— a process that she acknowledged would be “long and difficult.”

Based on the experience in Canada, some Native American advocacy groups in the United States want the U.S. government to be more proactive in setting up support for their communities. The National Indian Health Board and the National Native American Boarding School Healing Coalition asked Warren and other lawmakers to request the support services.

The groups would like to see the United States set up resources like a national hotline, trauma-informed mental health counseling available for survivors and their communities, and financial help for Native American communities to search burial sites and honor their dead.

“We believe that healing will need to be community-led, and tribal nations should be at the forefront of determining what mental, spiritual and physical supports their citizens will need as this truth-telling process unfolds,” said Christine Diindiisi McCleave, a member of the Turtle Mountain Anishinaabe and the CEO of the Native American Boarding School Healing Coalition.

Ultimately, her group would like to see the creation of a formal truth and healing commission on boarding schools to guide the process.

Last year, Warren and Haaland — who was then a member of Congress — introduced legislation that would create such a commission to investigate, document and acknowledge past injustices of the federal government’s Indian boarding school policy.

Aides for Warren said she is working with partners on plans to reintroduce the bill this year.

Earlier this month, the Canadian federal government committed $321 million for programs to help support survivors and their communities in Canada. Some of that money will go to help fund searches of more burial sites and commemorate the children who died. Other funding is slated for mental health services to support healing.

As reported by the CBC, Canadian government officials said they had heard from members of First Nations in Canada that the discovery of the burial sites over the summer had opened old wounds.