Home Featured Autonomous vehicles can deliver pizzas in TX. Will they deliver jobs to NV?
Featured

Autonomous vehicles can deliver pizzas in TX. Will they deliver jobs to NV? 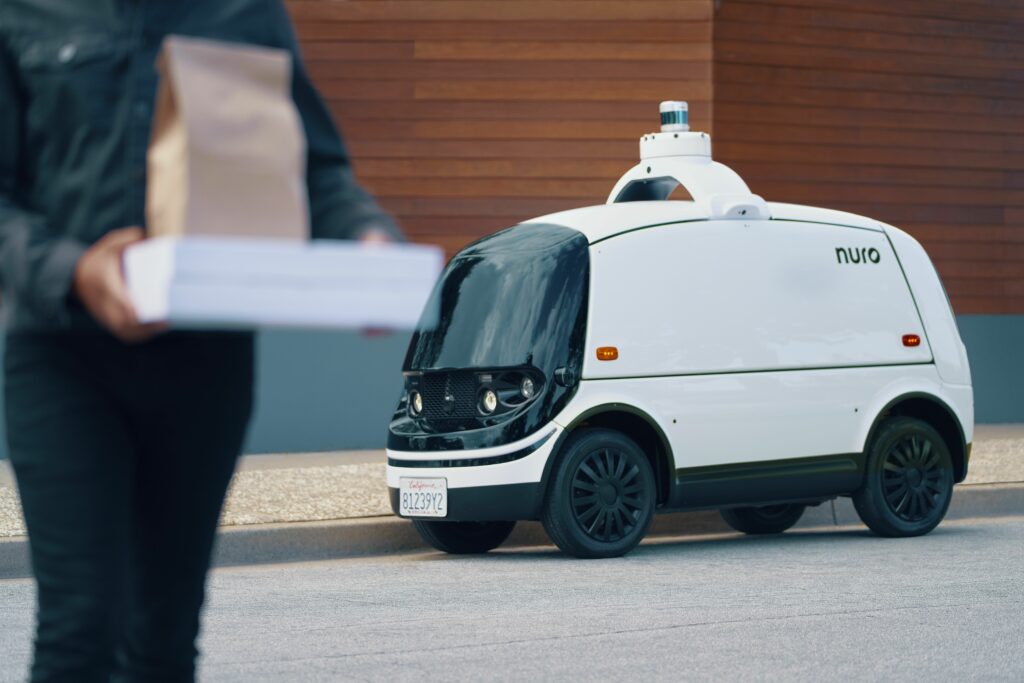 LAS VEGAS–An autonomous vehicle company is planning to build a manufacturing facility and test track in Southern Nevada, marking one of the latest efforts by the state to diversify the economy beyond travel and tourism.

Flanked by federal and state lawmakers, the Silicon Valley-based robotics company Nuro held a press event Thursday to announce its plans to commercialize and scale production of its third-generation autonomous delivery vehicles.

Those plans include building a 125,000-square-foot end-of-the-line facility on Craig Road and Bruce Street in North Las Vegas that will allow for the manufacturing of “tens of thousands” of Nuro’s third-generation, fully electric, fully autonomous delivery vehicles. A closed-course testing facility will be located approximately seven miles away, on 75 acres of Las Vegas Motor Speedway.

Both facilities are slated to be operational in 2022.

Nuro’s efforts are likely to receive from Nevada more than $670,000 in tax abatements over a decade. The Governor’s Office of Economic Development in March approved just over $170,000 in abatements. Nuro is scheduled to go before the GOED board on Sept. 23 to request an additional $500,000 in abatements, the company confirmed.

Nuro is projected to generate more than $25 million in tax revenue over the next decade, as well as $10 million in capital investments, according to a release from the governor’s office.

Nuro CEO Dave Ferguson, Gov. Steve Sisolak and Sen. Jacky Rosen spoke at the press event Thursday. They praised what the company says will be “an initial 250 highly skilled career opportunities,” with a projected average hourly wage of $27.50 plus benefits.

“That is an incredibly starting wage for all of these jobs,” said Sisolak. “And these aren’t just jobs. These are careers.”

But a breakdown of how the company reached those employment and wage projections was not made available by Nuro or GOED.

The robotics company’s application for a $500,000 tax abatement would likely include such a breakdown. But it is currently considered a confidential draft submission and exempt from public records requests, according to a spokesperson from GOED. Although the agenda for the meeting was posted a month in advance, companies have until three days prior to the meeting to amend their applications. After that point, the applications will become public and posted.

Nuro declined to provide specific details such as exactly how many and what types of jobs they are projecting. A spokesperson said via email, “These are high-skilled jobs that are designed to train the Nevada community for a 21st century career. Nuro’s goal is for employees at these facilities to go on to a long career in high-tech.”

In March, GOED approved just over $170,000 in tax abatements. That application focuses on the planned test track and promises the creation of 50 jobs in two years (and over 60 within five years), with an average hourly wage of $28.80.

On that application, Nuro also details $1.3 million in capital expenditures, most of which will be acquiring “various props for testing,” cameras and sensors, and traffic lights for use on their test track. According to a press release announcing their planned facilities, the “testing track will measure bot performance in a broad range of scenarios, from avoiding pedestrians and pets to giving bicycles space on shared roadways, as well as environmental tests and vehicle systems validations.”

A letter from the company to GOED included with the application stated the company was also considering a teleoperation facility “where trained operators would oversee the remote operations of Nuro vehicles around the country.”

Nuro specializes in designing fully electric, fully autonomous vehicles made for delivering goods in low-speed urban areas. Its plans for Southern Nevada center on R3, its third-generation vehicle, which the company has previously said it hopes will become fully scalable.

The company’s first and second gen vehicles have been used in pilot delivery programs launched with partner companies, which include pizza giant Domino’s and grocery giant Kroger. FedEx is partnering with Nuro to use the R3 vehicles.

Sisolak in his comments Thursday joked that the excitement surrounding Nuro coming to Southern Nevada wasn’t just about “getting your pizza hotter and faster” but about the potential to be a leader in an emerging technology.

Like other companies in the autonomous delivery vehicle space, Nuro currently runs off investment funds. Recent investors include the fast-casual chain Chipotle and Woven Capital, a global investment firm with Toyota Motor Corporation.

Nevada was an early embracer of autonomous vehicles. In 2011, Nevada became the first state to pass legislation allowing for autonomous vehicle testing. Backup drivers were originally required but that restriction has since been removed.

In 2017, a driverless shuttle in Downtown Las Vegas was tested (and notably was involved in a minor collision within hours of debuting). Earlier this year, a joint venture between Hyundai and Aptiv began testing driverless cars on Las Vegas roadways, according to the Associated Press.

Also this year, Nuro successfully lobbied the Legislature to adjust the state’s autonomous delivery vehicle laws to make it easier for them to operate. Specifically, Assembly Bill 412 expanded the type of roads they can drive on and exempted them from requirements for vehicle features like steering wheels that don’t apply to driverless, passengerless cars.