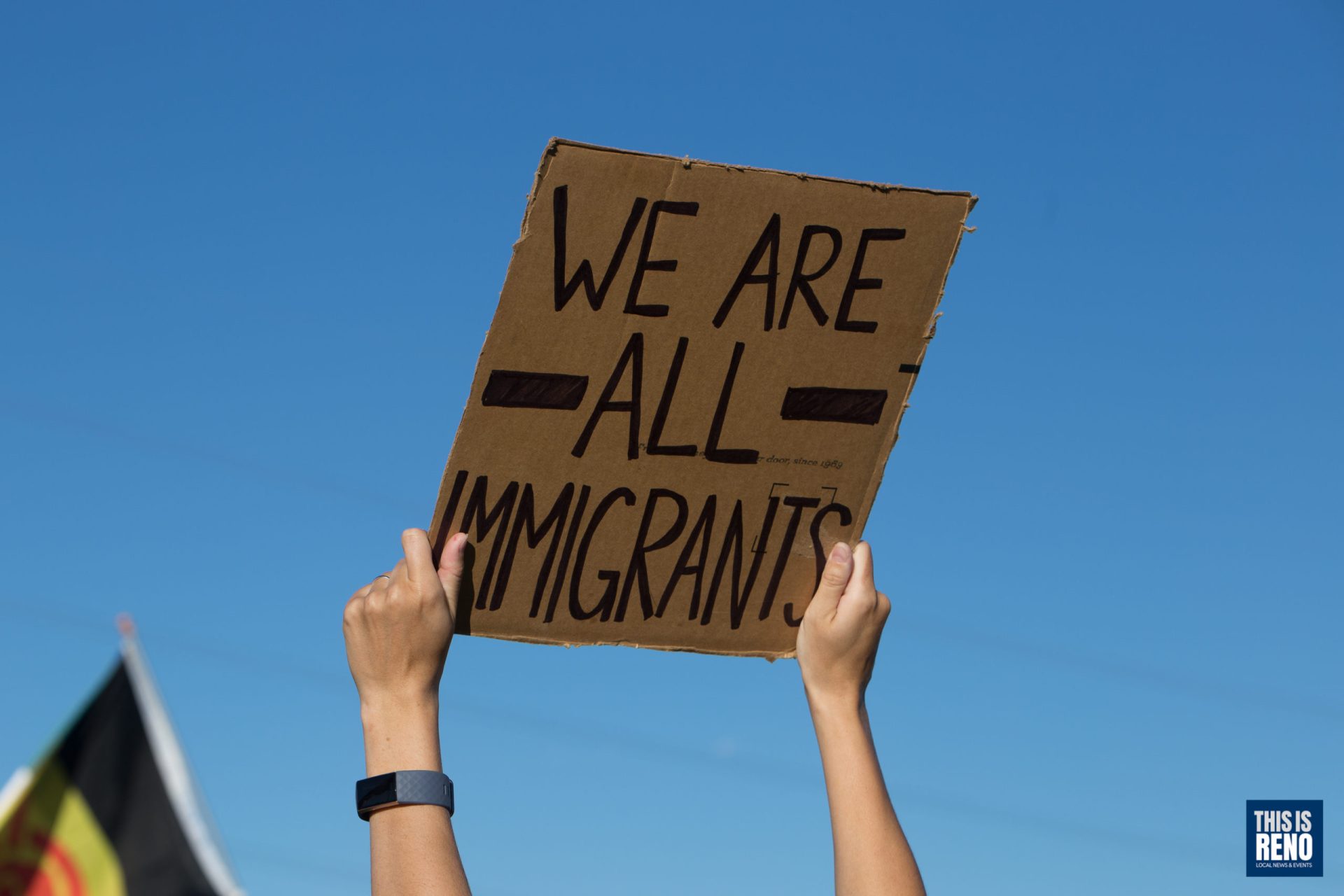 A protest sign against ICE at a July 11, 2020 demonstration at the Washoe County Jail. Image: Trevor Bexon
Share
0
FacebookTwitterPinterestLinkedinTumblrRedditWhatsappTelegramEmail

RENO—Erika Castro of the Progressive Leadership Alliance of Nevada on Friday said her organization has had enough of the “vicious and racist attacks on the DACA program and immigrants as a whole.” The statement was released shortly after a federal judge in Texas ruled DACA (Deferred Action for Childhood Arrivals) to be unlawful.

About12,000 Nevadans benefit from DACA, a program created in 2012 by the Obama Administration. DACA allows some individuals brought to the United States as children prior to 2007 who do not have lawful presence to defer action from deportation and to apply for a work permit to remain in the U.S. It does not provide a path to citizenship.

DACA has been a controversial policy since its inception and under attack several times, including in a 2014 lawsuit by several states that was blocked by a Supreme Court decision and again in 2017 when then-President Donald Trump said he would phase out the program.

Congress has yet to pass legislation to make DACA a permanent program, despite hearing a number of bills on the matter. The DREAM Act, intended to provide a direct path for citizenship, was perhaps the most promising. A bipartisan group of senators introduced it in 2017 but it failed.

Judge Andrew Hanen’s ruling said the government can no longer accept new applicants into the DACA program, which he deemed “illegally implemented” and said was “created in violation of the law.” Hanen did not order revocation of status for current DACA recipients.

PLAN’s Castro said that Nevada’s elected officials must find a solution in favor of citizenship through Congress’s reconciliation process, which can avoid a filibuster from Republicans. “Empty platitudes and advocacy for more of the same will result in the separation and deportation of families. Including mine,” she said.

“This ruling is wrong and will threaten the safety of tens of thousands of new DACA applicants who will no longer be able to pursue protected status. It must be overturned,” Cortez Masto wrote on Facebook. “We must pass the American Dream and Promise Act without delay.”

Rosen said the budget reconciliation process was an option. “I want to take this moment to reiterate my support for comprehensive immigration reform that includes a pathway to citizenship for immigrants in our country,” she wrote. “It is critical that we immediately pass immigration reform legislation through any means possible, including the budget reconciliation process.”

Nevada Governor Steve Sisolak and Charina de Asis, the state’s director of the Office for New Americans, also said the ruling was disheartening.

“This ruling highlights the importance to put an end to the uncertainty and the fear that Dreamers have been forced to endure for years by providing them a path to citizenship,” de Asis said.