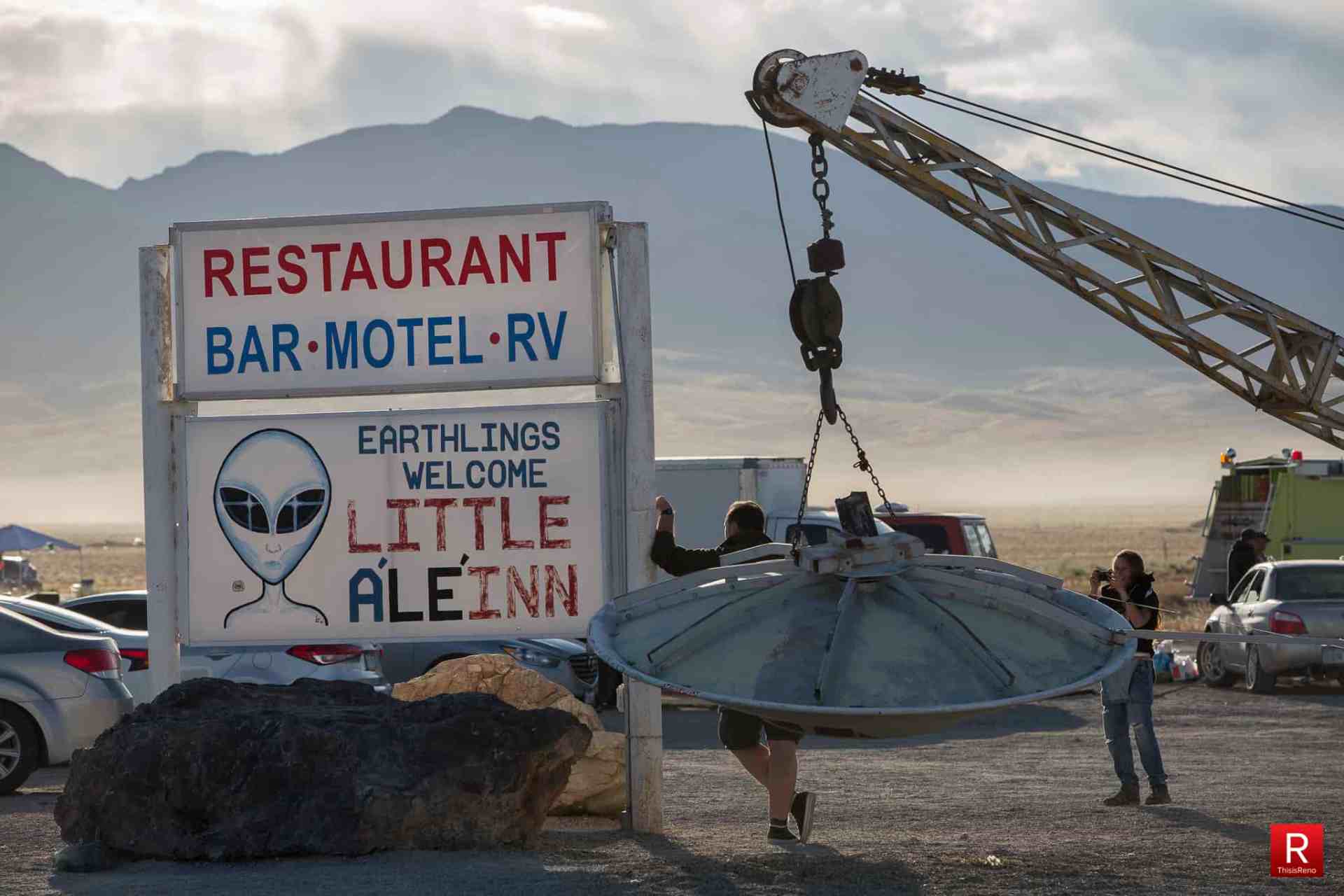 Nevada has long been associated with aliens and UFOs, in part because of the not-so-secret Area 51 military installation in the southern Nevada desert. It is believed by many to warehouse alien spacecraft and UFOs.

Rumors persist of UFOs crashing in the desert near the towns of Ruth and Ely in the early 1950s. Still other rumors of UFOs near the town of Tonopah sighted during the 1980s were quashed when it was discovered the sightings were actually of test flights of the military’s stealth fighter jets.

Nonetheless, a cottage tourism industry has sprung up around aliens and UFOs in rural Nevada, mostly along Highway 375, better known as the Extraterrestrial Highway. It stretches from Tonopah in the west, through Rachel and ends at Alamo in the east and includes the Little A’Le’Inn and the Alien Research Center gift shop, among other sights. The stretch has even hosted an Alien-themed festival, Alienstock, in 2019.

This week The Conversation published the following story:

On June 25, 2021, the U.S. government released a nine–page preliminary report on UFOs, or, as it is now calling them, Unidentified Aerial Phenomena, or UAPs. The report is the latest notable event in what has been a renaissance for UFOs in recent years. Greg Eghigian is a historian of science at Penn State who has published research and is writing a book on the history of UFOs in the U.S. We spoke with him for The Conversation Weekly podcast the day before the new report came out to better understand the cultural history of UFOs in the U.S.

Below are excerpts from our conversation that have been edited for length and clarity.

When did the idea of UFOs first emerge?

The idea of aliens and that other worlds might be inhabited actually goes back to ancient times. The question was a matter of real debate among philosophers, scientists and theologians in the Western world by the 18th century and it was widely accepted that alien civilizations existed.

But something changed in the 19th century. That’s when you first start to see these reports of people seeing what they say were flying ships overhead. The things people describe back then sound a lot like the things they were familiar with – they literally saw ships and vessels that would normally float on the sea in flight. Some people would see steam-powered ships.

But it’s really not until the summer of 1947 that people began to regularly speak of seeing flying objects that some attributed to extraterrestrials.

A pilot by the name of Kenneth Arnold was flying his small plane near Mount Rainier in Washington state. As he was flying around he said he saw some sort of glimmer or shine that caught his eye and was concerned that maybe he was going to have a collision with another aircraft. When he looked, he saw what he described as nine very odd-shaped vessels flying in formation.

After Arnold landed, he reported his sightings to authorities at a nearby airport and eventually talked to some reporters. When a reporter asked Arnold to describe how the things moved, he said, “they flew like a saucer would if you skipped it across water.” Some very clever enterprising journalists came up with the headline “flying saucers” and from that point forward they were flying saucers – even though Arnold never uttered the phrase himself.

A Gallup poll six weeks after the event discovered that 90% of Americans had heard the term flying saucer. This was the beginning of the phenomenon that some call the flying saucer era and the contemporary idea of UFOs.

Within days other people in the country began reporting having seen similar things in the sky. Within weeks the U.S. Air Force decided to look into the reports. Arnold’s story also triggered a lot of press interest and soon the international media were covering this story. It was a worldwide phenomenon within months.

Who starts to look into UFOs?

Two things happened in parallel: First were government-sponsored investigations in the U.S., specifically within the Air Force. Starting in 1947 the Air Force set in motion a number of different projects all basically interested in one question: Do UFOs represent a national security threat? The government wasn’t interested in a deep scientific analysis of these things.

On the other hand, from 1947 to 1950 you had a lot of the general public who were just utterly fascinated with the mystery of flying saucers. What are they? Are they real? If they are real, who’s behind them? Some people threw around the idea of aliens, but that’s not really the major theory that people bought into. Most people – if they thought the sightings were real – believed they were either secret weapons of the U.S. military or secret weapons or secret aircraft of the Soviets.

So out of this fascination developed what you could call the equivalent of fan groups – flying saucer clubs. Those became the seeds of growth in the 1950s and 1960s for UFO organizations first at the local, then the national and then the international level.

How did government programs fit into the UFO ecosystem?

A lot of what the Air Force did was behind closed doors and supposed to be clandestine. The government has released files over many years that show that a considerable number of UFO sightings were people seeing secret airplanes like the U2. It’s no surprise that the Air Force would try to keep strict control over what’s revealed to the public.

But that strict control is one of the many things that fed conspiracy theories over the years. The idea among UFO believers became “The government isn’t shooting straight with us. Somehow we’ve got to get these people to disclose all the information they know.”

What is the modern American perspective on UFOs?

Up until the ‘90s the Cold War played a really fundamental formative role in how people in the U.S. imagined UFOs – both in terms of how we think about humanity’s prospects technologically, but also relating to the fears and anxieties surrounding the Cold War. But when the Cold War ended, interest fell off. From the late 1990s into the early 2000s media coverage was nominal.

That all changed with the 2017 revelations about the secret UFO project in the Pentagon. This spurred on a resurgence of interest in UFOs. The way the media were talking about UFOs had lot of the same elements from before: Are these things alien? If they’re not alien, are they from our military or somebody else’s military? Are the people who were pushing the narrative and stories of sightings operating in good faith or are these con men?

Do you see a shift in how scientists think of UFOs?

In my conversations with scientists I’ve been seeing some movement toward a willingness to say, “This stuff is maybe worthy of looking into more seriously.” The important change since the 1990s – specifically for astrophysicists and astronomers – has been the discovery of so many planets around other stars that could possibly support life.

I’m excited by the prospect of deeper study – both as a phenomenon that needs to be investigated by physical scientists but also as a social and cultural phenomenon. Mystery breeds speculation, and the UFO phenomenon is not a puzzle that can be easily solved. The mystery part gives people an opportunity to ask big questions about not just humanity’s place in the universe, but about the limits of technology and knowledge. I think that’s why people keep returning to the question of UFOs.