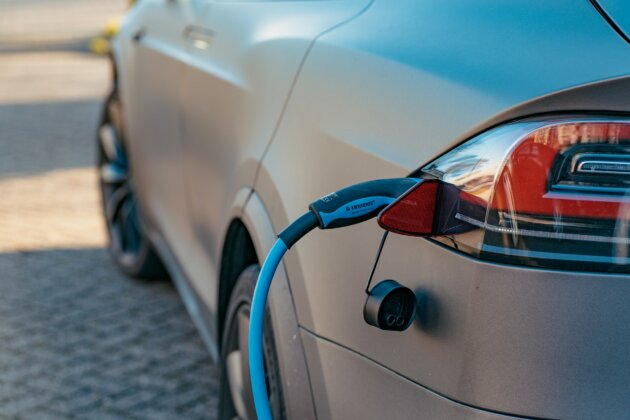 By Clara Bates
This story was originally published by Nevada Current.

CARSON CITY–Nevada hopes to become a national leader in clean energy, but some activists are concerned about what might be sacrificed along the way.

The problem of green policy being not-so-green, or not-so-just, has become a familiar one in Nevada. Lithium mining helps electric vehicles but might harm Indigenous communities nearby, creating “sacrifice zones.” The Clark County Lands Bill would designate millions of acres for conservation, but also massively expand urban sprawl and development, potentially moving resources away from older neighborhoods.

The latest in a string of environmental policies with complex implications, and conservationist opposition, is the big energy bill Gov. Steve Sisolak signed into law Thursday.

There are two essential elements of the law: electric vehicle charging and transmission.

The law directs NV Energy to spend $100 million to expand electric vehicle charging infrastructure over the next three years, 40% of which must go to “historically underserved communities.” More significantly, NV Energy will dramatically expand transmission lines — the electrical cables that carry electricity over long distances — with the promise of attracting economic investment in the state and creating jobs. Transmission lines take electricity where it currently isn’t, so the hope is to attract private capital to come pay to use that electricity.

The total cost will be around $2.5 billion, NV Energy President Doug Cannon told lawmakers during a committee meeting. NV Energy will front the cost but the law allows the company to recover any reasonable, prudent expenditures from the rates charged to customers.

Among other provisions, the law also increases the portion of energy efficiency programs spent on low-income households from 5% to 10%, and creates a task force to discuss joining a Regional Transmission Organization, an interconnected grid on the west coast.

The charging provisions are progressive in name but potentially inconsequential for those communities in practice, some advocates say. Meanwhile, the transmission provisions make no attempt to appear progressive, but might be highly consequential.

The expansion of electric vehicle charging is explicitly justice-oriented, with 40% set aside to be located in or otherwise benefit underserved communities.

This section proved popular among many Democratic lawmakers and some progressive groups, like Battle Born Progress, which supported the bill. U.S. Energy Secretary Jennifer Granholm praised this part last week during a visit to Nevada, saying it addresses the groups most hurt by climate change.

“This is a really good first step in order to address how communities are disproportionately affected, especially communities of color,” Rudy Zamora, program director of Chispa Nevada said. “This is going to allow us to make sure that we are seeing those investments in our neighborhoods, and that we are pushing forward to a clean energy economy and future.”

Brooks said the expansion of charging infrastructure will motivate more people to buy electric cars, which are becoming less expensive. (Some data predicts that they’ll cost the same as gas-fueled cars in five years.)

The lack of charging capability, Brooks said in an interview, is “the primary hurdle” keeping many Nevadans from owning electric vehicles.

Assemblywoman Shondra Summers-Armstrong (D-Las Vegas) in a committee meeting wondered about additional hurdles: “We need an opportunity for folks in these communities to be able to own these vehicles, not just have charging stations in the neighborhood.”

Chispa proposed language that would have helped underserved people afford electric cars, Zamora said, “but unfortunately that was something that there’s no funding for at the state right now.”

Ian Bigley, an organizer for Progressive Leadership Alliance of Nevada, said in an interview that the focus on single-occupancy cars is itself misguided, and he would’ve preferred the bill to prioritize mass public transit, which would most benefit those communities.

Patrick Donnelly, Nevada state director for the Center for Biological Diversity, suspects that some groups supported the bill because they liked the electric vehicle provisions and the focus on underserved communities — but they didn’t necessarily understand or support the transmission section.

The transmission policy has been arguably the most controversial, among a relatively small but vocal group of conservationists.

“If it was a standalone bill I think it’s likely there would have been dissent,” Donnelly said. The bill passed with bipartisan support (unanimously in the Senate and 32 to 10 in the Assembly).

NV Energy has sought to expand transmission for years. The company and Brooks say new transmission lines will make the grid more reliable, and attract new investments, such as solar and geothermal renewable projects, which could be built near the lines. Those projects would provide more clean electricity to the state and bring in tax money, because companies would pay state and county taxes in order to lease the land.

There is one cross-state transmission line already. Last summer, NV Energy proposed building two more lines, a project called Greenlink. The western line would run northwest from Las Vegas to Yerington. The other, in the north of the state, would run from Yerington to Ely. Those two new lines would, combined, span roughly 600 miles.

The Public Utilities Commission, which regulates NV Energy, partially rejected the Greenlink proposal out of cost concerns. The PUC allowed NV Energy to proceed fully on the western line but only allowed permitting and land acquisition, not construction, of the northern line.

The law directs the PUC to approve the rest of Greenlink North, allowing NV Energy to move forward with its original proposal.

“The PUC, we typically don’t tie their hands, we allow them that autonomy to deal with the subject matter that they’re good at,”state Sen. Scott Hammond (R-Las Vegas) said at the initial hearing, raising concern that government intervention in bureaucracy causes inefficiencies.

Brooks said, in an interview, that intervention into regulatory processes is necessary in this instance, to pursue a broader policy agenda.

He said that utility regulators evaluate “short-term potential impact to ratepayers,” but policymakers and legislators have responsibility for developing the state’s “long-term vision.”

Brooks also denied there would be any rate increases, the reason the PUC initially rejected the plan. Many legislators during the bill’s hearings also asked about potential impacts to ratepayers: To recoup the costs of such a large investment, why won’t the utility spike rates?

“There is nothing that demonstrates that rates will necessarily go up at all,” Brooks said in an interview. He said the cost will be shared among everyone using the transmission over a long period, including companies attracted by the new transmission lines, which will reduce costs borne by individual ratepayers.

“We could turn those into areas that could be developed into clean energy projects, as well as load projects,” Brooks said in the initial hearing, “whether it be data centers, manufacturing, or any other type of heavy industrial loads, mining. We could open up the opportunities for all of that for development in our state.” Any project that uses electricity, he said, might want to come.

And that has Donnelly of the Center for Biological Diversity and other conservationists worried. The transmission lines are slated to be built mostly on federal lands. They fear that the development Brooks described will open up vast swaths of undisturbed land to private developers, damaging natural beauty, animal habitats, and the character of small towns.

Greenlink North, for instance, cuts right through the greater sage-grouse bird’s habitat, which there has been a long fight to conserve.

“That’s going to be a major source of controversy,” Donnelly said.

Greenlink North as planned also would go along U.S. Route 50, the “loneliest road in America,” a famous tourist attraction.

“Right now we’re kind of setting things up for that to be the loneliest solar farm in America,” Donnelly said.

Kevin Emmerich, co-founder of Basin and Range Watch, also opposes the recently-passed policies. The Bureau of Land Management is seeing dozens of new applications for big solar projects, because the transmission project is getting support from the Legislature and the PUC, he said.

These applications include two proposals to build solar farms right next to Death Valley, Emmerich said. One would be near a famous ghost town, Rhyolite, in Beatty.

“The entire view from that ghost town would now be engulfed by a 10-square-mile solar project,” he said in an interview. Some communities, once they find out that big solar projects will be built near them, might grow concerned about their tourism industry, like in Beatty, Emmerich said.

Communities in other states have opposed transmission lines in their areas, for land-use and visual reasons.

“The Legislature did not even have those environmental impacts on their radar. They had to hear it from commenters,” Emmerich said.

A few people spoke in opposition to the bill on environmental grounds, including Emmerich, Donnelly, and John Hadder of Basin Range and Watch. Several environmental groups supported the bill, too, such as the Sierra Club, Western Resource Advocates and EcoMadres.

Brooks said that these projects will have to get through “a robust permitting and environmental study process that’s currently in place.” The bill didn’t mention environmental concerns because, he said, “there’s no need to refer back to existing federal and state laws that apply to this project.”

“There’s a segment of the environmental community which doesn’t want anything to be built anywhere,” Brooks said. “And that’s just something that is not realistic if we’re going to address climate change in a real way.”

Both Donnelly and Emmerich think renewables can be adopted in a more sustainable way, ideally through distributed generation, energy generated at or near the place it will be used,  rather than large-scale, long-range transmission projects. Distributed generation includes small-scale projects like rooftop solar, which would allow people to produce their own energy.  Bigley of PLAN, which testified as neutral on the bill, said the state should restructure the grid to facilitate distributed generation, to produce an “economy that benefits people” rather than an economy that benefits the corporations producing large-scale projects.

Brooks said that using distributed-only power, at least as the grid exists now, is a pipe dream, and an expensive one, too. “It’s unrealistic, and it’s impossible to be able to fully address our carbon goals and to really put a dent in the climate crisis by using distributed generation alone.”

At the very least, if large-scale transmission lines are to be built, conservationists want a more robust conversation about where they will go, to minimize the impact on nature and residents.

Public meetings on Greenlink West will be held by the BLM in late June.

“I’m just hoping that when this gets to more people and more people know about it, and they know how this is going to impact their national parks, and their wildlife, we can have a better conversation,” Emmerich said.