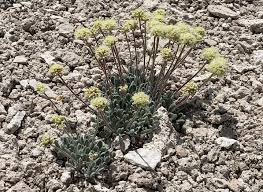 This comes after a 12-month study by the U.S. Fish and Wildlife Service (FWS), required as a court stipulation. The study found that due to severe drought conditions and herbivory–animals eating the plants–an Endangered Species Act (ESA) listing of Tiehm’s buckwheat is warranted.

The Center for Biological Diversity (CBD), an environmental advocacy organization whose offices are located around the West and Southwest, filed suit in 2019 in federal court to have Tiehm’s buckwheat listed as an endangered species. CBD often sues for a variety of environmental causes.

In September of last year, CBD alleged in a press release that the destruction of about 40% of the plant’s population was destroyed purposefully by humans. Representatives from ioneer disputed the claim, dovetailing off of a FWS report that showed the plants had died of natural causes—specifically, rodents.

Tiehm’s buckwheat is an endemic species, meaning it’s rare. It’s found only in Nevada and only in a small and isolated part of the state near ioneer’s proposed mine in Esmeralda County.

FWS is expected by September to publish a proposed rule to list Tiehm’s buckwheat as endangered. Afterward, a period of public comment will begin.

The mining company’s Managing Director Bernard Rowe said, “We fully support and share FWS’s commitment to protect and preserve Tiehm’s buckwheat. The latest finding was in line with our expectations, and we support the FWS’s deliberations on a final listing decision. This process will provide greater certainty around our schedule and diminishes the prospect of future litigation.”

Rowe said ioneer will continue working with FWS, the U.S. Bureau of Land Management (BLM) and scientific experts on the development of a Candidate Conservation Agreement (CCA) to further protect the plant. CCAs are formal, voluntary agreements between the FWS and one or more parties to address the conservation needs of one or more candidate species or species likely to become candidates for future protection.

“From the commencement of our Rhyolite Ridge Project planning, we have undertaken significant work and investment to minimize and mitigate any impact on Tiehm’s buckwheat, as we have done with all environmental aspects of our operation,” Rowe said.

He stressed that FWS has stated threats to the plant include ongoing drought and unusual acts of herbivory by small mammals.

“ioneer is fully committed to assisting in the research, development and roll out of required protection measures to ensure Tiehm’s buckwheat’s conservation,” Rowe said, adding that, “FWS is authorized by the ESA to issue an incidental take permit for activities it finds will not jeopardize continued existence of an ESA-listed species.”

“Take” is defined by the ESA as harass, harm, pursue, hunt, shoot, wound, kill, trap, capture or collect any threatened or endangered species.

“Our protection and conservation efforts are being designed to meet that standard to maximize protections. The listing status does not affect the protections ioneer is planning for Tiehm’s buckwheat. By the time FWS is ready to make a final listing decision, we expect the CCA to be in place and plant conservation measures,” Rowe said.

Future mining activity at ioneer’s Rhyolite Ridge mine is expected to fuel the production of lithium batteries for electric vehicles and energy storage needs.

In a statement concerning the proposed endangered species designation for the buckwheat, CBD State Director Patrick Donnelly said, “We’re thrilled that the Biden administration has proposed Endangered Species Act protection for this delicate little flower. Tiehm’s buckwheat shouldn’t be wiped off the face of the Earth by an open-pit mine. The Service stepping in to save this plant from extinction is the right call.”

Feds agree to decide if wildflower is endangered by end...