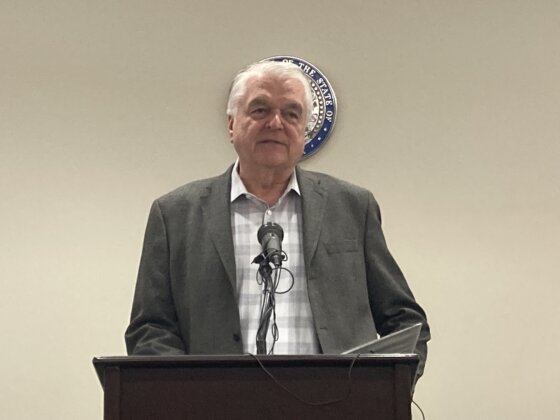 "The state relinquished control to the counties in terms of vaccinations. We are concerned," Sisolak said during a press conference Wednesday. "We’re working as closely as we can with our cities and our counties to make sure they have the resources necessary to provide vaccines whether those are mass sites, drive-up sites, or pop-up sites.” (Photo: Jeniffer Solis)
Share
0
FacebookTwitterPinterestLinkedinTumblrRedditWhatsappTelegramEmail

As hospitalizations tick up, Sisolak says ‘get vaccinated’

LAS VEGAS–Nevada has moved into a new phase of vaccine rollout by ending restrictions statewide and closing mass vaccination sites in favor of smaller clinics and community events, but a resurgence in coronavirus cases over the past week is a reminder the pandemic isn’t over.

Nevada has continued to report a slow rise in COVID-19 cases over the past two weeks as the positivity rate — or percentage of tests that came back positive — increased to 4.0%, from 3.9%.

The Department of Health and Human Services reported 447 new coronavirus cases on Wednesday — the highest daily number of cases in over a month.

Confirmed and suspected COVID-19 hospitalization cases rose to 281 on Wednesday, after falling as low as 178 on June 12.

At a news conference on Wednesday, Nevada Gov. Steve Sisolak, acknowledging the increase in COVID-19 cases and hospitalizations across the state, noted those who were hospitalized were not vaccinated.

“The uptick in cases and the uptick in hospitalizations, none of those folks have been vaccinated. If you want to protect yourself there’s a simple solution: Go get vaccinated,” Sisolak said.

“We can prevent the hospitalizations and we can certainly prevent the deaths if we just get more people vaccinated.”

By comparison, Los Angeles County in California, with a population five times as large as Clark County, boasts a 7-day average positivity rate of 0.8% and reported only 260 new cases and 230 hospitalizations on Wednesday. Los Angeles County also has a significantly higher vaccination rate of 58%, according to California data.

Since April, vaccination rates in Clark County have seen a steady decline. The two-week moving average for vaccines fell to 4,525 on Wednesday, the lowest rate since January when vaccines were limited to healthcare workers.

On Wednesday, when asked if Clark County moved away from mass vaccination efforts too soon as vaccination rates have lagged, Sisolak said, “The state relinquished control to the counties in terms of vaccinations. We are concerned. We’re working as closely as we can with our cities and our counties to make sure they have the resources necessary to provide vaccines whether those are mass sites, drive-up sites, or pop-up sites.

“We are not forcing anyone to get a vaccine,” he added. “As we said, we’ve turned it over to various counties. Some have been more aggressive than others.”

Stephanie Bethel, a public information officer for the Southern Nevada Health District, said “larger-scale clinics just closed this week and could not be attributed to any decline” in vaccinations.

“Based on trends in vaccination rates, the Health District and its partners have shifted focus to smaller venues and community events,” including multiple schools and efforts to reach homebound residents.

The health district also plans to increase the use of mobile vaccine clinics during and after the summer to tackle low vaccination rates and reach residents with limited transportation.

“Low vaccination rates are a continual problem for Nevada,” said Brian Labus, an epidemiologist who served as a member of Sisolak’s Medical Advisory Team. “We typically rank near the bottom of the list when it comes to the annual flu vaccine and we are seeing the same thing with the COVID vaccine.”

The state, meanwhile, is offering financial motivation to encourage people to get vaccinated. Nevada will distribute $5 million in cash prizes to residents who have been vaccinated at least once.

Sisolak said it was still too early to tell if the lottery has incentivized more people to get vaccinated.

During his press conference Wednesday, Sisolak announced the disbanding of the Nevada COVID-19 Task Force as the group moves away from the need to provide personal protective equipment and medical supplies for Nevada’s healthcare workers.

Dr. Robert McBeath, a member of the now-disbanded group, reflected on the challenges Nevada faced during the start of the pandemic.

“We had no real capacity to test,” McBeath said. “While the laboratories were local these tests were done out of state and the turnaround times were five days, and that had a critical impact on just about every facet of work we were doing.”

“We started with protocols for social distancing and masks. We now have the most effective tool ever which is vaccines,” Sisolak said.