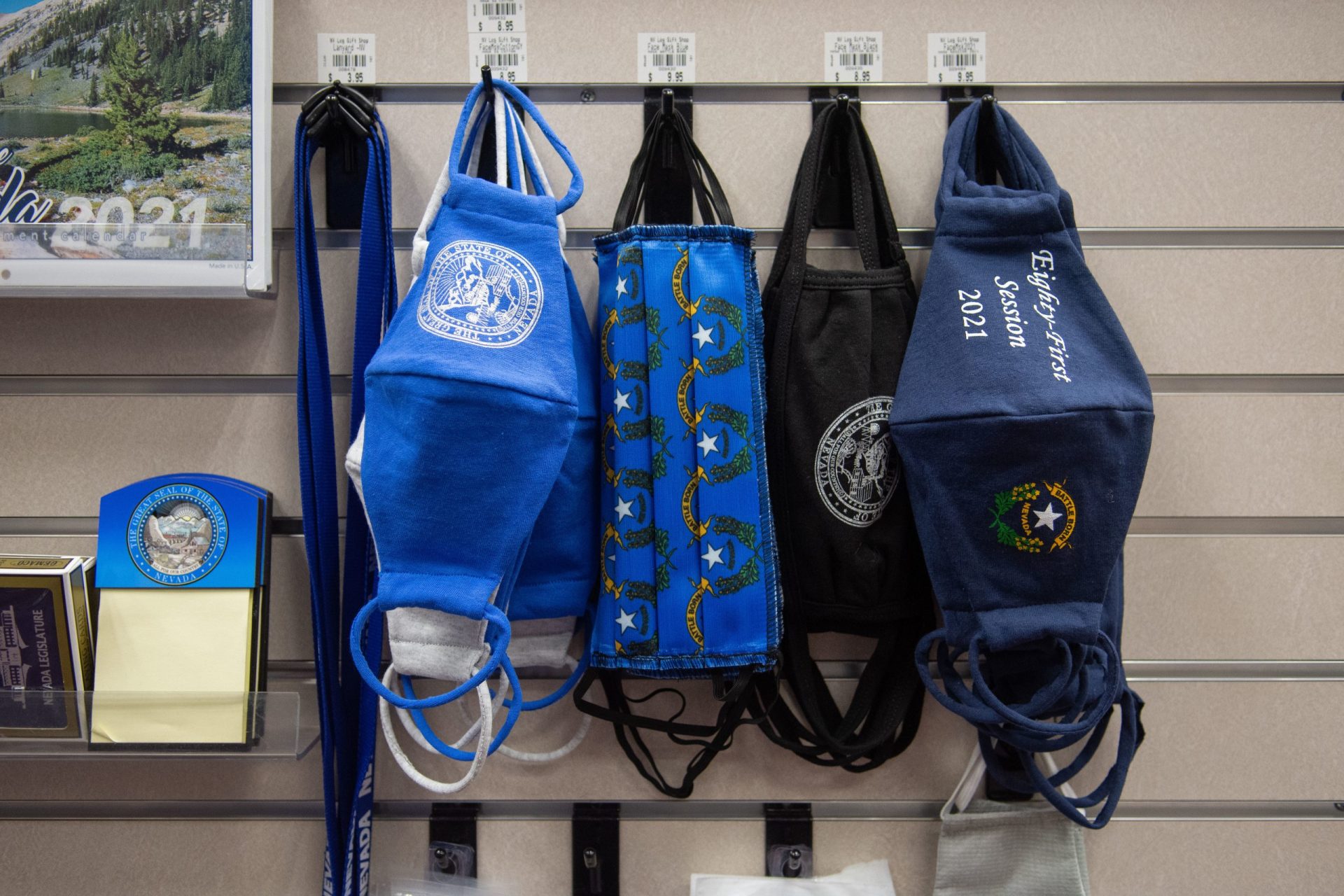 Face masks for sale inside the legislative gift shop on the first day of the 81st session of the Nevada Legislature in Carson City on Monday, Feb. 1, 2021. (David Calvert/The Nevada Independent)
Share
0
FacebookTwitterPinterestLinkedinTumblrRedditWhatsappTelegramEmail

CARSON CITY, Nev. (AP) — Long-simmering disputes over coronavirus restrictions in the Nevada statehouse boiled over on Thursday when the Democratic majority voted to punish Republican lawmakers for refusing to comply with rules in place to prevent the spread of the coronavirus.

Under rules announced Wednesday, people in the statehouse can roam the building without face-coverings as long as they have been vaccinated. Republican Assemblywomen Annie Black and Jill Dickman went mask-less on the Assembly floor, but they refused to make known whether or not they had received vaccines on Thursday.

Dickman was escorted out of the Assembly floor after staff told her that she would have to prove that she had been vaccinated. She refused. In a party-line vote, the Assembly elected to strip Black of her right to vote on measures and address the chamber until she apologized for violating legislative rules. She remained on the Assembly floor.

“This is WAY out of control!” Black tweeted after the incident.

Democratic Assembly Speaker Jason Frierson said the Assembly rules allowed people to forego masks but required they wear them if they have not been vaccinated.

“We were informed that there were persons who had not confirmed they were vaccinated and would not wear masks, so they didn’t comply with our rules,” he said.

It’s unclear how legislative staff determines who has been vaccinated. Frierson directed questions to Legislative Counsel Bureau Director Brenda Erdoes, who did not respond to requests for comment.
The mask fight mirrors similar clashes in other statehouses and the U.S. Congress. Congressional Republicans were fined on Wednesday for not complying with the body’s mask rules.

In the Nevada statehouse, Republicans have clamored for months about coronavirus restrictions. They have argued that if restaurants, bars and casinos can open, then the Legislature should as well. Democrats, who control the statehouse, have argued that restrictions mirror those in place in many workplaces and are necessary to protect the health and safety of staff.

Black, who attended the “Save America” protest in Washington, D.C., on Jan. 6, has been admonished for posting videos of herself in the statehouse unmasked. Tensions have risen since last week, when lawmakers bickered over whether wearing masks should be required for an outdoor group photograph.

On Tuesday, Black violated the rules by taking off her mask to address the Assembly and was later warned that she could be censured and stripped of her right to vote if she continued to flout rules that lawmakers approved when the Legislature convened in February.

“The Nevada Legislature continues to insist that everyone wear a mask here in this building unless cloistered alone in their office,” Black said on the Assembly floor after removing her mask. “It’s especially absurd to require masks here on the floor of the Assembly, where we’re not only sufficiently social distanced, but separated by plexiglass shields.”

Dickman said she believed nobody should have to disclose personal medical information and said government officials asking people to show a paper to prove vaccine status was coercive and overreaching.

“I am not willing to make public my private information,” Dickman said. “Apparently we have de facto vaccine passports in the Nevada Legislature which — since we don’t have them in the state or the country — doesn’t make sense to me.”

The restrictions in place in the statehouse have gradually been loosened throughout the four-month legislative session as infection rates have fallen and vaccination rates have risen. The building was initially closed to the public except for a limited number of reporters but reopened on an appointment-only basis in April.

The U.S. Centers for Disease Control and Prevention on May 13 eased face-covering guidelines outdoors and in most indoor settings, but left it to state and local governments to implement their own rules, which can differ between public settings and individual workplaces.