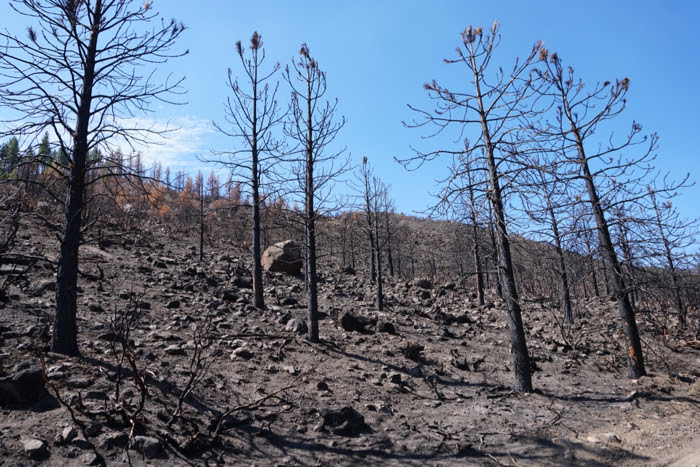 RENO–After a wildfire, soils in burned areas often become water repellent, leading to increased erosion and flooding after rainfall events – a phenomenon that many scientists have attributed to smoke and heat-induced changes in soil chemistry. But this post-fire water repellency may also be caused by wildfire smoke in the absence of heat, according to a new paper from the Desert Research Institute (DRI) in Nevada.

In this pilot study (exploratory research that takes place before a larger-scale study), an interdisciplinary team of scientists led by DRI Associate Research Professor of Atmospheric Science Vera Samburova, Ph.D., exposed samples of clean sand to smoke from burning Jeffrey pine needles and branches in DRI’s combustion chamber, then analyzed the time it took for water droplets placed on the sand surface to be absorbed – a measure of water repellency.

The pilot study investigated the effects of smoke and heat on water repellency of the sand and was the first study to also incorporate an analysis of cold smoke. In the experiments, sand was used in place of soil because it could be cleaned thoroughly and analyzed accurately, and Jeffrey pine for a fuel source because it represents a common wildland fire fuel in the Western U.S.

Before exposure to Jeffrey pine smoke, water droplets placed on the surface of the sand samples were quickly absorbed. But after exposure to smoke, the sand samples showed severe-to-extreme water repellency, in some cases retaining water droplets on the soil surface for more than 50 minutes without soaking in. It made little difference whether or not samples had been exposed to heat and smoke, or just cold smoke.

“The classic explanation for fire-induced water repellency is that it is caused as smoke diffuses under rather hot conditions and settles down into the soils, but our work shows that the smoke does not have to be hot to turn the sand hydrophobic — simply the presence of the chemical substances in the smoke is enough,” Samburova said. “This is something we really need to look deeper into because soil water repellency leads to increases in flooding, erosion, and surface runoff.”

This study built on previously published work by former DRI postdoctoral researcher Rose Shillito, Ph.D., (currently with the U.S. Army Corps of Engineers), Markus Berli, Ph.D., of DRI, and Teamrat Ghezzehei, Ph.D., of University of California, Merced, in which the researchers developed an analytical model for relating soil water repellency to infiltration of water.

“Our earlier paper focused on how fire changes the properties of soils, from a hydrology perspective,” Berli said. “In our current study, we were interested in learning more about the chemistry behind the process of how soils come to be hydrophobic. We’re bringing together geochemistry and organic geochemistry with soil physics and hydrology to understand the impact of fire-induced water repellency on hydrology.”

The project team is now working on a larger proposal to further investigate questions touched on by this study about the roles of heat and smoke in fire-induced water repellency. Among other things, they would like to know how long soil water repellency lasts after a fire, and gain a better understanding of the detailed processes and mechanisms through which cold smoke affects the soil.

Gaining a thorough understanding of the process that leads to fire-induced soil water repellency is important because land managers need this information in order to accurately predict where soils are likely to be hydrophobic after a fire, Berli explained.

“We still don’t really understand the processes that lead to this fire-induced soil water repellency,” Berli said. “Depending on what we find, the measures to predict fire-induced water repellency might be different, and this can have a significant impact on how we can predict and prevent flooding or debris flows that happen after a fire.”

“This study was one big step forward, but it highlights the importance of future research on how fires affect soil because wildfires are affecting thousands and thousands of square kilometers of land each year in the Western U.S.,” Samburova added. “Some of our future goals are to find out how exactly this soil water repellency happens, where it happens, and how long it lasts.”