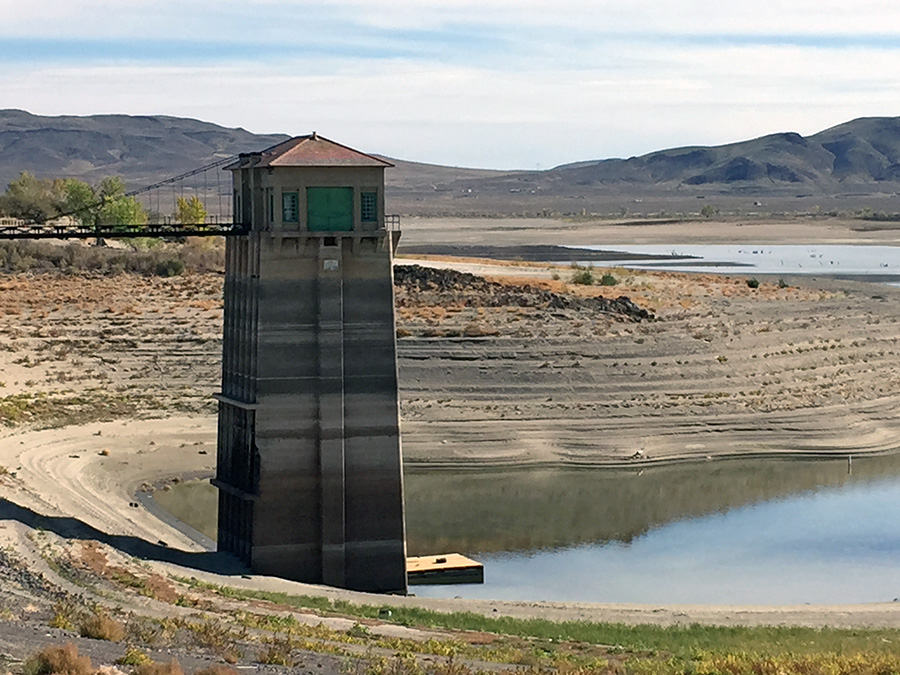 The Lahontan Reservoir is fed by the Carson River and by the Truckee River with water diversions from the Derby Dam, supplying water for irrigation. Pictured here in 2014, in the third year of a four-year drought, much of the lake was completely dry. Image: UNR
Share
0
FacebookTwitterPinterestLinkedinTumblrRedditWhatsappTelegramEmail

CARSON CITY, Nev. (AP) — Rural water users are panicking over a proposal to create a market for the sale and purchase of water rights in Nevada, unconvinced by arguments that the concept would encourage conservation.
Lawmakers on Monday weighed whether so-called “water banking” would be preferable to prevailing water law doctrines that govern surface and groundwater rights disputes in the driest state in the U.S.

A legislative hearing about two proposals to allow water rights holders to sell their entitlements pitted state water bureaucrats against a coalition of farmers, conservationists and rural officials.

One proposal would allow for basins to create “banks” where surface and groundwater rights holders can sell or lease credits for water they conserve. The other would create programs to manage the conserved water, allowing the state to purchase conservation credits or pay water rights holders to “retire” their claims.

“What we’ve heard all the time for years is that this is incentivizing people to use more water that they need; or they are being punished for not using their entire water right; or they’re forced to sell off what they don’t use. There’s no really satisfying response to that except that it’s how (the law) was written,” acting Nevada State Engineer Adam Sullivan said.

As the U.S. West contends with a hotter and drier future, water banking is becoming an increasingly prevalent management strategy in states including Colorado and Utah. Proponents argue crediting people for conservation will help prevent future shortages and offer water rights holders an option beyond use, abandonment or selling.

A working group in the Colorado Legislature is evaluating the concept and the proposals under consideration in Nevada are based off policies in place in Utah and Oregon.

In rural Nevada, where limited groundwater has long sustained industries like ranching and mining, local officials worry that creating a market for water rights will encourage their constituents to lease their water for use elsewhere.
Great Basin Water Network Executive Director Kyle Roerink called the bill a “buy, dry and export plan masquerading as conservation” that would benefit special interests in urban areas.

Throughout the West, rural water users have been pursued by New York-based hedge fund Water Asset Management, which has reportedly purchased water rights from farmers in central Nevada’s Humboldt River basin, in Colorado’s Grand Valley and in central Arizona.

Nevada Department of Conservation & Natural Resources spokesperson Samantha Thompson said the proposal, which was submitted by the Governor’s Finance Office on behalf of the state division of water resources, wasn’t geared toward a particular basin or seeker of water rights.

Deputy Administrator for the Nevada Division of Water Resources Micheline Fairbank said she wasn’t aware of any hedge funds seeking to use water banking frameworks for speculation.