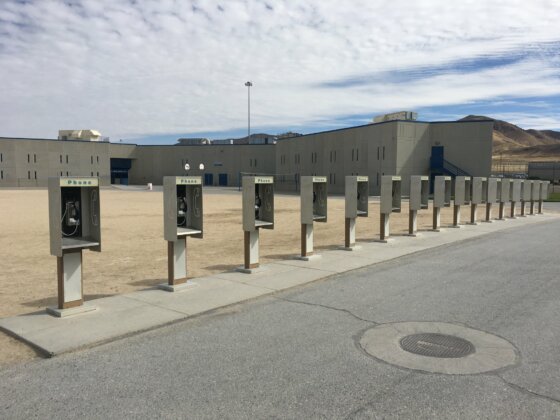 The Department of Corrections has struggled to explain scheduling, Covid protocols and other details about resuming visitation. “So much is not communicated and that’s because they haven’t figured it out,” said Jodi Hocking, the founder of the prison advocacy group Return Strong.(Nevada Department of Corrections photo)
Share
0
FacebookTwitterPinterestLinkedinTumblrRedditWhatsappTelegramEmail

CARSON CITY–After nearly 14 months of prisons not allowing visitors, many people with incarcerated family members have been eager to see loved ones again. The Nevada Department of Corrections is scheduled to resume visitations Saturday.

But family members say they still have unanswered questions, have been unable to schedule visitations and are left with concerns about the guidelines.

“So much is not communicated and that’s because they haven’t figured it out,” said Jodi Hocking, the founder of the prison advocacy group Return Strong. “I don’t know why they would announce visitations would open without having these things prepared. While we want visits opened and we want to work out a solution to visiting, we want a solution that is safe for our loved ones who are incarcerated and doesn’t run the risk of another outbreak in Nevada.”

Hocking said the group reached out to corrections officials and the Nevada COVID-19 Task Force.

She said NDOC responded that “they are working on it,” but she hasn’t heard back from the COVID-19 Task Force regarding their concerns around visitations resuming.

“Why is the COVID Task Force not more aggressive about accountability for COVID in the prisons and vaccines in the prisons?” she asked. “I have concerns about the task force. Other than meeting with (NDOC), what have the results been?”

According to The Marshall Project, there are 22 states and the District of Columbia that have resumed visits with some limitations. Another 22 states don’t allow normal visits but allow legal visits.

Nevada is one of six states that still has all of its visitations suspended.

At an April 20 meeting of the Board of Prison Commissioners, which is composed of Gov. Steve Sisolak, Attorney General Aaron Ford and Secretary of State Barbara Cegavske, Nevada Department of Corrections Director Charles Daniels indicated the plan was to resume visitations at facilities starting May 1.

Sisolak was concerned the low numbers of fully vaccinated inmates would prevent prisons from allowing visitations.

The department recently updated its totals and 3,822 inmates have received their first dose while 641 received a second dose.

After the April 20 meeting, NDOC posted guidelines including:

Hocking said there are concerns around requiring that inmates be vaccinated, which she said punishes people who haven’t been vaccinated even if they requested to be. She also questioned the policy around the first dose, especially if inmates only recently got it and haven’t had time for inoculation to take effect.

“That does not provide full immunization,” she said. “How is it fair to open visitation when not everyone has been allowed to get the first dose? It creates an inherent inequity.”

The policy, she added, also doesn’t take into consideration people who aren’t getting vaccinated, whether because of their medical history or other concerns.

Other details, she said, are vague and left the group with many unanswered questions.

“One of the things they haven’t communicated is what’s the process,” she said. “They say visitation will be at capacity. What’s the capacity? Is it 25% capacity for everybody? How are they determining what the limit for capacity is and how many people can go at a time? How are they doing sign-ups for the time?”

Vance said families are being directed to a website to sign up and hours and frequency will vary by institution.

Nevada Current interviewed several families, who preferred not to give their last names, who have attempted to sign up for visitations without any luck.

Nicole hasn’t seen her husband, an inmate at High Desert State Prison, for 14 months. Before the Board of Prison Commissioners meeting she called the Department of Corrections family services coordinator and was told there wasn’t a plan to resume visitations.

Since then, she has tried to ask High Desert State Prison directly.

“At High Desert, they have two different phone lines strictly for visiting and I probably called them 60 times the other day,” Nicole said. “The only time anyone picked up they immediately hung back up. How is anyone supposed to know what we’re supposed to do on Saturday? It’s not that far away. People should have already been signed up for this if they’re going to do it by appointment.”

For families who are far away or with several young children, scheduling visitations is even more complicated.

“I was informed by the correctional officers answering the phones at Warm Springs (Correctional Center) that they don’t know what’s going on,” said Charrise, whose fiancee is incarcerated at the facility. “They know they are going to open up on May 1, but they don’t know the days or the times.”

It was March 2020 when Charrise was 45 minutes into a nearly seven hour drive to northern Nevada when she got a phone call that visitations were canceled.

She has been eager to see the visits resume but hasn’t been able to to schedule a time yet.

“He’s got his vaccine and I’m vaccinated,” Charrise said. “I’m all for driving six hours to go up to Warm Springs and see him. It’s been 14 months. But how can I go up there when they’re not even scheduling?”

Prior to COVID-19, Susan, whose daughter is at Florence McClure Women’s Correctional Center, would take her three grandchildren, 13, 8 and 6, for regular visits.

“They got to hug her and have snacks with her,” Susan said. “We played games. Nothing can replace that, especially for children.”

That stopped during the pandemic.

The family was eager to finally be able to return to regular visits, but don’t know how they will manage since the current policy restricts the number of people coming in to only two.

“The children are going to be extremely upset because they won’t understand they can’t go see mommy,” she said.

Cristina, who lives in Reno, was pregnant with her third child when her husband was incarcerated in March 2020 at Warm Springs Correctional Center.

Her husband still hasn’t met their now 8-month-old. Because of the current rule that says children under 5 aren’t allowed in visitations, Cristina’s baby and 2-year-old might put her in a complicated situation.

She and her 5-year-old, according to the rules, can visit.

“It puts me in a position where I have to set up a babysitter for them and get up there and not know if I can even visit with him because of the capacity,” Cristina said.

Vance said the policy around ages will be re-evaluated at least every 30 days and that “in subsequent phases, the age will be lowered and maximum capacities will be increased.”

All visitors, Vance added, will be required to arrive at least 45 minutes prior to their visit to give time for testing and temperature checks.

Even with some safeguards, Hocking is worried not enough is being done to prevent future COVID-19 outbreaks.

“Personally, I think they need to pump their brakes for a second and get everything in order around questions about the vaccination and everything we’ve brought up,” Hocking said.

There have always been barriers for families to visit their loved ones in prisons. With visitations about to resume, Hocking said this is a good time to rectify the visitation process.

“Due to COVID, there has been this halt on visitations, which is not the state’s fault,” she said. “Coming back to visitation, we have the opportunity to do something better than what we were doing before.”

Areas that could be improved, she said, range from the overall process of checking in for visitations to establishing video visits.

“So many families live so far and we would love to see them implement video visits,” Hocking said. “Video visits are a good way to support and continue helping families build and keep connections, which is one of the biggest indicators of recidivism. But our concern is if they implement video visitation they would pull in contact visits. Our goal is to use video while implementing in person for those able to do it.”