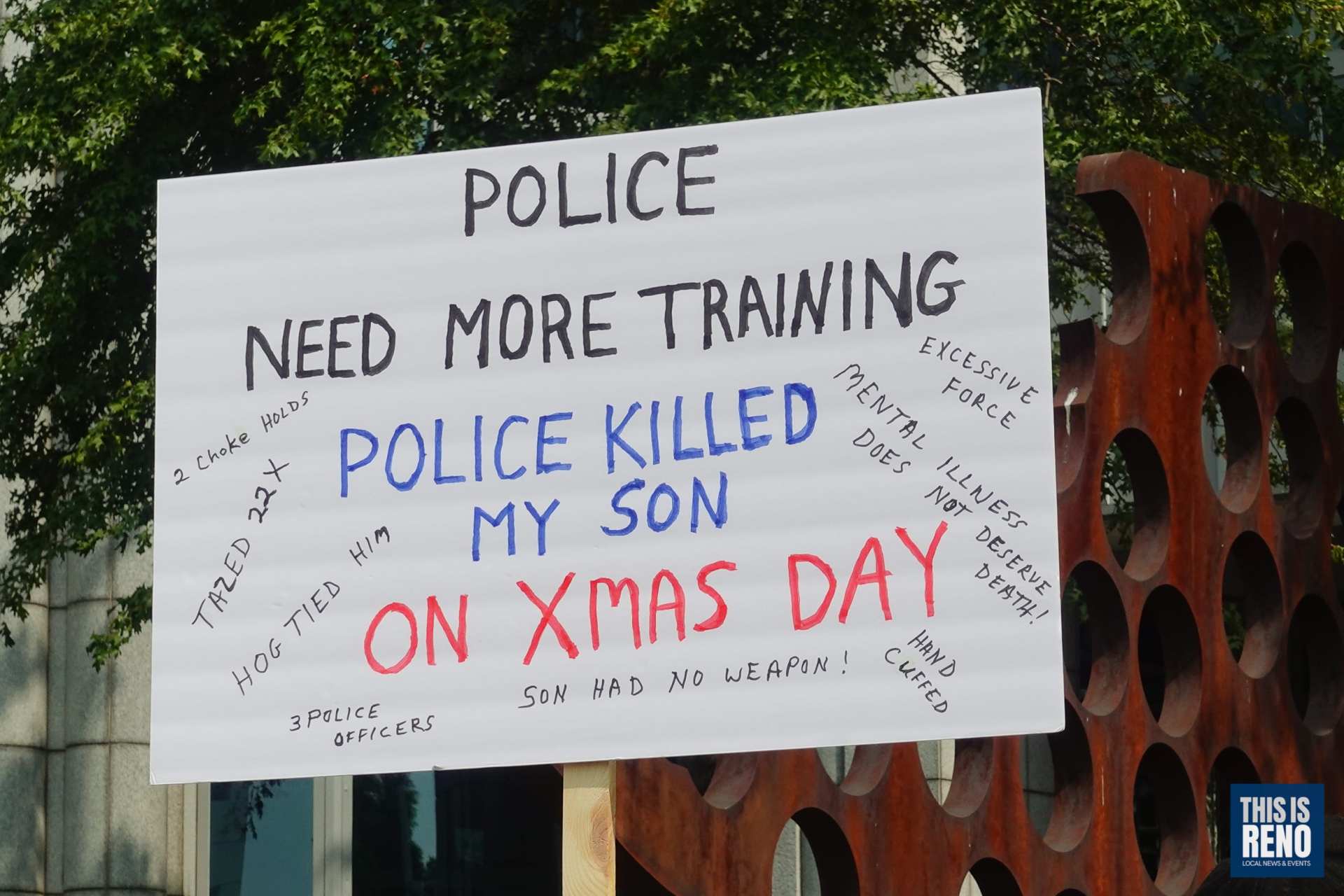 A sign carried by a protester at a demonstration to bring awareness to police use of force and killings on Sept. 12, 2020 in Reno, Nev. Image: Bob Conrad / This Is Reno
Share
0
FacebookTwitterPinterestLinkedinTumblrRedditWhatsappTelegramEmail

By Bob Conrad, This Is Reno

CARSON CITY–Civil rights activist DeRay McKesson was named in 2015 one of the World’s Greatest Leaders by Fortune Magazine. In 2016, he was called one of the 30 Most Influential People On The Internet by Time Magazine. He has more than a million followers on Twitter.

McKesson today testified at the Nevada Legislature in support of a police use-of-force bill introduced by Senator Dallas Harris (D-Las Vegas). McKesson is co-founder of Campaign ZERO, a “data-informed platform that presents a package of policy solutions to end police violence in America.”

Harris said the bill is a work in progress that is taking concerns by law enforcement into account as it is being developed. McKesson said Harris’ bill will save the lives of citizens and law enforcement officers. The bill would improve data collection, improve police accountability, clarify the use of force during protests and increase annual reporting of use-of-force incidents.

“It is important at the state level that these changes happen,” McKesson said. “We want to put these rules in place to be preventative. More restrictive use-of-force policies save people’s lives.”

But McKesson’s and his colleagues’ credibility was questioned by Senator Ira Hansen (R-Sparks), who criticized the bill by saying the data presented as part of the reason for the bill was inaccurate. Hansen also questioned the credentials of presenters supporting the bill.

“This is an incredibly one-sided, loaded presentation,” he complained. “Three people presented to this committee as experts… Why are you experts in these fields? Are you professional criminologists? Where are your credentials? I think it’s highly one-sided.”

Hansen quibbled with the activists’ claim that Black people are disproportionately killed by Reno police.

“When they have had those killings, the NAACP and all sorts of organizations are brought in to verify whether or cops actually used some sort of racial injustice in the  motivation in the shootings,” he said. “In every single case that I’m aware of they were considered justifiable shootings. Because you manage a database, I’m not sure that raises you to an expert on criminality in the United States.”

McKesson, who also ran for mayor of Baltimore, countered he had a background in teaching and now focuses his work on police violence.

“I would push back on the idea that the only people who have a license to say … how officers can use force … are police — I don’t think that’s true,” he said. “I would never, ever accept a definition of an expert that excludes people’s lived reality from being a part of that expertise.”

Harris also countered Hansen’s concerns by saying she worked with law enforcement on the bill and that they are supporting it.

“Using deadly force because you can, and feeling justified because it’s in the arsenal, shows a demonstrated lack of commitment to preserving life,” Harris argued. “The public lacks trust in the people who are sworn to protect it.”

Holly Welborn of the Nevada American Civil Liberties Union (ACLU) said the bill “is desperately needed in the state.”

AnneMarie Grant, whose brother was killed by Reno Police officers while experiencing a mental health crisis, spoke in favor of the bill, particularly strengthening protocols on the use of restraint chairs.

She said a restraint was used on her brother, who was hogtied by RPD officers and ultimately died. Grant testifies at most local government meetings during public comment to tell her brother’s story. She lives on the East Coast.

“Constant supervision should be a requirement,” she said.

The Las Vegas Metropolitan Police Department spoke in favor of the bill, saying what the bill is proposing is already in the department’s policies. The Washoe County Sheriff’s Office also expressed support for the bill, with changes.

Numerous people spoke in favor of the bill. Many cited negative and violent encounters with law enforcement.

Police union members expressed concern, calling the bill’s requirements onerous, based on faulty assumptions about police work or that they duplicate policies already in place.

“Police do not use force based on race,” retired Reno Police Detective Ron Dreher testified. “Police use force based on the actions of the person they are dealing with. Officers are very well trained and employ the use-of-force continuum to guide them. All officers go to work hoping to save someone.”

Dreher also testified last year against a bill banning the use of chokeholds by police. That bill passed.

Calli Wilsey with the City of Reno testified against the bill but said she had not seen an amendment that had been made to the bill.