Pandemic rush outside not enough to offset hit to recreation industry 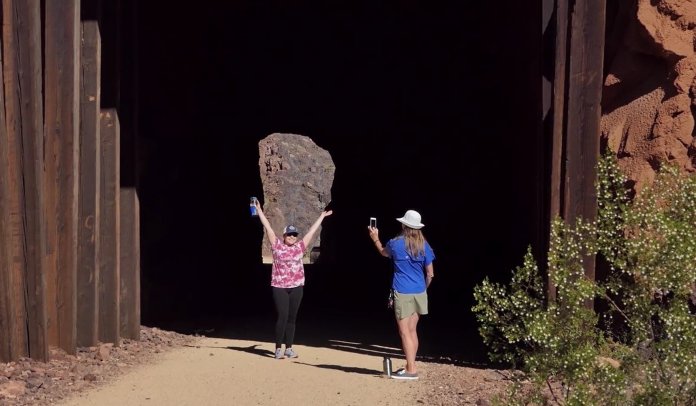 Prior to the pandemic, the outdoor recreation economy was one of the fastest-growing sectors in Nevada. (Image: Lake Mead National Recreation Area - National Park Service video screen grab).
Share
0
FacebookTwitterPinterestLinkedinTumblrRedditWhatsappTelegramEmail

CARSON CITY–In Nevada, residents flocked to outdoor recreation in the early months of the pandemic as restrictions shut down bars, restaurants, and concert venues.

However, a new report prepared for the business group Get Outdoors Nevada by BBC Research & Consulting found that the pandemic has hurt the outdoor and recreation industry in Nevada overall.

Between March and December 2020, the outdoor recreation economy in Nevada lost about 6% of its total jobs or 3,566 jobs. Those job losses reduced labor income by about $161.5 million on an annualized basis, costing local governments about $29.4 million in revenue, according to estimates by the research firm.

“We all know the stories of significant impacts on small businesses across the state of Nevada, and the outdoor businesses were not immune to that either,” said Colin Robertson, administrator of the Nevada Division of Outdoor Recreation, in a presentation of the report. “One of the important things this study reveals is the level of that impact and the significance of it.”

In the first few months of the pandemic, National Park Express, a transportation and tourism operator based out of Las Vegas, estimated their customer volume and revenue dropped by almost 90%. The company continues to operate at a loss each month.

Prior to the pandemic, the company had 35 full-time employees. Now they are down to the full-time equivalent of about 10.

Accommodations in outdoor gateway communities, like Boulder City, have also suffered. A Best Western hotel in Boulder City reported that restrictions in March led to a large drop in their occupancy.

The hotel usually receives international visitors who come to visit the Hoover Dam and the Grand Canyon, but those visits stopped during the pandemic.

The hotel’s revenues for the year are down about 40% compared to 2019. The business was approved for the Payroll Protection Program (PPP), but before those funds were available, the hotel laid off five employees. Currently, about half of the hotel’s staff are furloughed.

Restaurants and retail establishments dependent on the outdoor recreation economy saw a 22% decrease in visitation, according to the report.

Eclipse Pizza in Reno estimates 25% of its normal customer base is associated in some way with the local athletic and outdoor community. In 2020, the restaurant saw revenues decrease by 5% to 6% compared to 2019. However, beer and wine sales are down 90% to 95%.

Employees and operators in the outdoor recreation economy earn more than $2.6 billion in wages and salaries, annually, which is about 1.5% of Nevada’s total annual labor income, according to the report.

More than 87% of the state is public land, much of it open for recreational use.

Prior to the pandemic, the outdoor recreation economy was one of the fastest-growing sectors in Nevada, representing about 3% of the state GDP and producing $5.5 billion in direct economic impact along with  $12.6 billion in annual consumer spending and supporting about 59,500 jobs, according to the report.

“That’s a significant amount of jobs and a very important overall piece of the pie for Nevada economic diversification efforts,” said Robertson of the Nevada Division of Outdoor Recreation.

Data from the Outdoor Industry Association shows during the pandemic Americans even “took up new activities in significant numbers in April, May, and June of 2020” with running, cycling and hiking making the biggest gains.

Outdoor gear retailers have fared better than other businesses as demand for outdoor equipment, like bikes and hiking boots, has grown. One company in Las Vegas, LV Cyclery, reported that after public health and safety measures were relaxed in the state, the company sold a year’s worth of inventory in only three months.

“Interestingly retail trade is up 6% overall and that was borne out in a lot of the case studies we saw as well,” said Michael Verdone director of BBC Research & Consulting. “As businesses were able to make their establishments safer people came and spent money purchasing things like bicycles, kayaks and other apparel that allowed them to get outside and recreate.”

However, while these activities grew in popularity, they generate less economic activity than group-reliant hospitality-oriented businesses like guided tours.

In Nevada, guided tours and outfitted travel are the outdoor industry’s second-largest creators of added value, just behind local trips, at $234 million per year.

So while local visits to Nevada’s recreation and conservation areas have increased, local spending has not risen enough to offset the reduction in spending by the drop in out-of-state visitors, according to the report.

“There are much fewer people visiting the state compared to normal,” Verdone said.

Outdoor recreation activities are a significant draw for tourists in the state.

A survey by the Nevada Commission on Tourism in 2018 found that on average 17% of tourists participate in scenic driving, while nearly 15% visit a lake or reservoir during their trip.

Nevada residents also decreased the amount of time they spent at parks by nearly 35%. The start of the pandemic saw even greater decreases, and in April 2020 households were spending about 40% less time at parks.

In total, Nevada residents spent about 13% less time outside of their home compared to pre-pandemic times, causing a decrease in spending, according to the report.

“The combination of less time spent outside the house and fewer visitor arrivals is starting to show up in visitations of public lands,” said Verdone, adding that visitations were much lower than usual.

Local trips taken within 50 miles of a person’s home are the most important source of economic activity in Nevada’s outdoor recreation economy, contributing about $249 million per year according to the report.

Both the Nevada Outdoor Business Coalition and Get Outdoors Nevada support bills they believe would sustain the outdoor recreation economy by protecting public lands, including SB52, which would award a dark sky designation to certain sites in the state, and AJR3, a resolution that recommends protecting 30% of land and water by 2030, formally protecting Desert National Wildlife Refuge and establishing a new national monument called Avi Kwa Ame.

“We believe that access to the outdoors and strongly supported outdoor areas are a non-partisan social benefit, that positively affects all types of people,” said Aaron Lynn Leifheit, director of programs at Get Outdoors Nevada. “We also believe that protecting and strengthening outdoor areas creates outdoor recreation opportunities, which strengthens and diversifies local economies, especially in a tourism driven state like Nevada.”