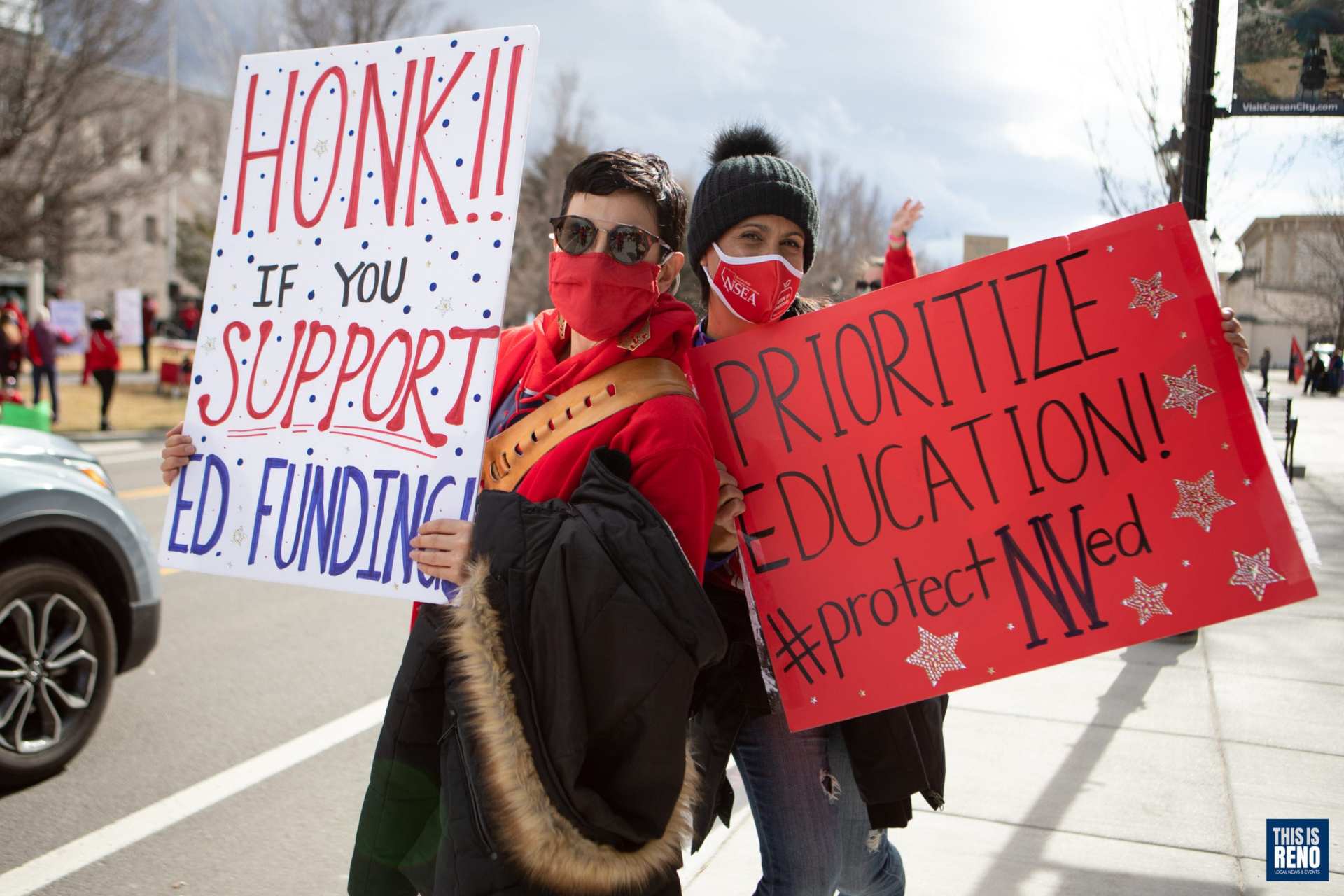 Educators rally for more funding from the Nevada Legislature in Carson City on Feb. 15, 2021. Image: Isaac Hoops / This Is Reno.
Share
0
FacebookTwitterPinterestLinkedinTumblrRedditWhatsappTelegramEmail

CARSON CITY–Voters next year may get the opportunity to raise the state’s gaming and sales taxes to support K-12 education, after the deadline for legislative action on the proposals came and went Friday.

The Nevada State Legislature had the first 40 days of the current session to approve two initiative petitions spearheaded by the Clark County Education Association. The first proposal would raise the gaming tax from 6.75% of all gross revenue to 9.75% of all gross revenue for nonrestricted gaming licensees that exceed more than $250,000 per calendar month in gross revenue. The second proposal would raise the Local Schools Support Tax, which is part of the overall retail sales tax, from 2.25% to 3.75%.

Inaction from lawmakers was expected, as Democratic leadership have publicly stated they were not supportive of either proposal. Neither petition received a hearing.

With the deadline for legislative action withered, the dual proposals are now slated to appear on the 2022 general election ballot.

CCEA Executive Director John Vellardita says he is “absolutely not” surprised by this week’s legislative outcome: “It was made clear from the word ‘go’ they weren’t interested.”

But Vellardita emphasizes the union is not tied to their proposals as the solution for better increasing K-12 funding.

“We’ve always said that we’ll support a dedicated revenue stream that goes to K-12 and funds (the new pupil-centered funding formula) off the recommendations of the school funding commission,” he said. “And we also know that any revenue requires bipartisan support. We’re not looking to take anything off the table.”

Raising taxes in Nevada requires a two-thirds majority in both houses, something the majority Democrats have in neither. Four Republicans — two in each chamber — will need to support any revenue increase for it to succeed.

That is a bigger hurdle than existed before the 2020 general election. At that time, Democrats only needed one Republican state senator to flip. During a special legislative session last summer, Democrats attempted to raise taxes on lucrative mining companies but ultimately failed after Republican state Sen. Keith Pickard pledged to break with his party and support the measure only to reverse course and vote against it.

The teachers union, which supported Pickard and helped push him to a 24-vote victory in 2018, stood by their endorsement despite the senator’s change of heart on the mining tax proposal last summer.

Vellardita on Friday wouldn’t comment on any alternative potential revenue sources or how conversations with GOP members are going. Numerous proposals related to mining and property taxes have already been introduced this session.

If any of those proposals advance, CCEA could opt to withdraw one or both of their ballot questions.

“There are enough interested parties that do not want to see these initiatives on the ballot that it has fostered a productive discussion to find new revenue sources,” said Vellardita.

CCEA estimated their proposals would bring in $1.3 billion annually to fund the state’s K-12 system. Their proposed sales tax hike has drawn critics opposed to the regressive nature of sales tax, and their proposed gaming tax would no doubt draw well-funded opposition from the gaming industry.

Vellardita also indicated the union would not be placated by the expected influx of federal relief money, which he described as a game changer but not a permanent solution.

“One-time money is not ongoing,” he said. “That’s what we want to see.”