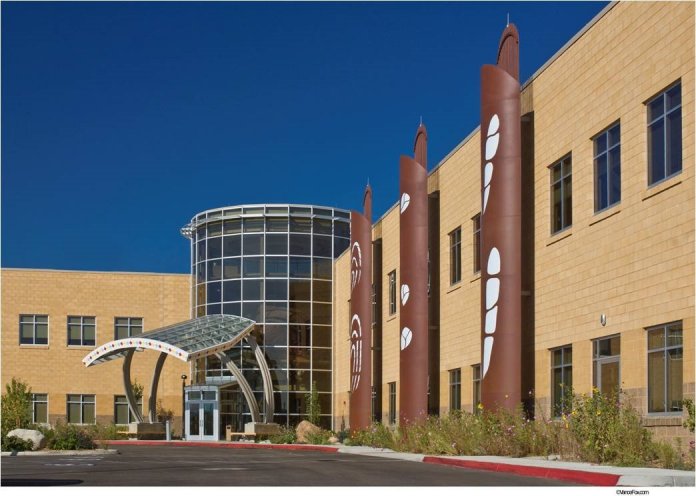 The Reno Sparks Tribal Health Center is one of 14 centers in Nevada that has distributed vaccines through the federal Indian Health Service. (Photo courtesy Reno-Sparks Indian Colony)
Share
0
FacebookTwitterPinterestLinkedinTumblrRedditWhatsappTelegramEmail

SCHURZ–Native American people are disproportionately affected by the coronavirus, facing higher rates of infection, hospitalization and death, but the vaccine rollout has been a bright spot among Nevada’s tribes.

On the Walker River Paiute Tribe reservation, home to about 1,200 members, more than 530 members have received at least one vaccine as of early March, a rate of about 44%.

“We’ve progressed rapidly as far as making sure to hit our essential workers and moving down to our elderly population, our most vulnerable population,” said Amber Torres, chair of the Walker River Paiute Tribe.

The Walker River Paiute Tribe is now offering vaccines to anyone over 18 years of age.

The Walker River Paiute Tribe provides vaccinations by appointment, at drive-in events and at large community vaccination events. Emergency management staff for the tribe have even gone the extra mile to administer vaccines to home-bound patients or elders.

The tribe’s health clinic is one of 14 tribal and urban Indian health centers in Nevada that has distributed vaccines through the federal Indian Health Service (IHS), covering 27 federally recognized tribes in the state.

Tribe-operated clinics have offered an advantage to rapid vaccination, said Torres. Clinics run by tribes already know the most effective ways to reach out to their population.

As of March 3, IHS has delivered more than 10,000 vaccine doses to tribal and urban Indian health care partners in Nevada, and about 6,000 of those doses have already been administered by the various tribes that reside within the state.

“Nevada is doing a great job and is moving quickly,” said Debra Ward Lund, chief nurse officer for the IHS Phoenix Area and team lead for the Phoenix Area vaccine task force. “They have a smaller population than, say, Phoenix, but the proportion of our Nevada recipients is very high. They are winning out of our three states.”

The IHS Phoenix health service area includes all of Nevada and most of Utah and Colorado, excluding the portions of those states that are part of the Navajo Nation. They provide healthcare and community health services to 140,000 American Indians and Alaska Natives and are a healthcare partner to over 40 tribes.

The Pyramid Lake Tribal Health Clinic has administered 733 COVID-19 vaccines for the tribe’s more than 1,300 enrolled members living on the reservation as of March 4, likewise inoculating a large portion of their membership.

The Shoshone-Paiute Tribes Emergency Operation Center has vaccinated 311 members of the 1,700 living on the reservation as of March 9.

“Our population meets all the comorbidities that we know increase the risk of severe illnesses of COVID-19,” Lund said. “It is critically important that we vaccinate as efficiently and safely as possible.”

Back in January, the seven-day rolling average for positive COVID-19 cases in the entire IHS Phoenix health service area was a little over 40%, a sharp COVID-19 spike that started in October.  It’s now declined to about 4%.

Clinics can submit requests for vaccines each week based on the size of their population, their capacity for distribution, and their community’s needs.

“We don’t want it sitting in freezers. We want it in arms,” Lund said. “We’re giving it to sites that are ready to give it with an understanding that everybody has unique challenges that might limit how fast they can give it.”

Lund coordinates communications with tribal and urban health centers in Nevada receiving vaccines from IHS and oversees the team that does data reporting for vaccines, noting that vaccine rollout among tribes has been highly successful compared to the rollout to the general public.

Ninety-seven percent of Nevada’s Tribal Nations are rural, however, which poses a challenge to vaccine distribution. In the first week of distribution, when Pfizer was the only vaccine approved, the more remote tribes had trouble accepting the vaccine because they couldn’t store it at the required temperatures while traveling hundreds of miles.

“The Pfizer vaccine is stored at ultracold temperatures which requires a special freezer and none of our Nevada sites had such a freezer,” said Lund. “We had some sites that drove five hours to pick up a single vial of vaccine. But it was pretty historic that we were able to do that and give them all that we could that very first week, and then we had to do it again three weeks later” to administer second doses.

Another issue for Nevada’s rural tribes was the minimum order of 195 vials required for Pfizer vaccines, each vial containing up to 11 doses.

“Our Nevada sites are typically pretty small. They’re small rural communities and so they wouldn’t have been able to handle an order minimum of that size,” Lund said.

The Walker River Paiute Tribe ultimately chose to use the Moderna vaccine because it can be shipped frozen directly to tribal and urban health centers.

As sovereign nations, the tribes are free to shape vaccine distribution to fit the needs of their community, including priority groups for the vaccine.

While the Centers for Disease Control and Prevention (CDC) recommend that initial phases of the vaccine distribution start with the people 75 and older, many tribal communities in Nevada define their elder population as 55 years and older.

“Even though as a region we were distributing vaccines based on the CDC definition we adjusted our allocation and prioritization guidelines to meet the needs of the community,” Lund said.

Part of the work for IHS was sending representatives to local tribal community meetings to evaluate community needs and answer questions on the vaccine directly. One of the challenges for tribal health providers early on was vaccine hesitancy.

“We’ve had some sites report back religious reasons and cultural and spiritual reasons and concerns in addition to concerns about side effects, so relying on traditional practitioners and those who are from the culture to help us provide education that is culturally appropriate was critical,” said Lund.

“The biggest challenge has been the historical trauma that’s instilled into the membership on vaccinations coming from the federal government,” said Torres. “It’s been a huge education process to help our members see the good the vaccination will bring.”

Still, a recent study by the Urban Indian Health Institute found that 75% of American Indians and Alaska Natives are willing to receive the COVID-19 vaccine, largely out of a sense of responsibility to protect their community.

Individual tribes and IHS have worked together to combat myths around the vaccine and combat vaccine hesitancy, including social media, direct contact through email and text, and even old fashioned snail mail. Getting leaders in native communities to vaccinate early was also part of building trust.

“Like with any vaccine there is hesitancy,” said Stephanie Smith, a registered nurse, and immunization manager for the Washoe Tribal Health Center. “I do feel that the longer we have it the more people are becoming comfortable and open to it.”

The clinic is offering appointments three times a week and has a designated nurse who offers one-on-one consultations for those experiencing vaccine hesitancy.

“Meeting with our patients and building that trust is very important and it takes time but that’s what we are here to do,” Smith said. “The relationship needs to be there.”