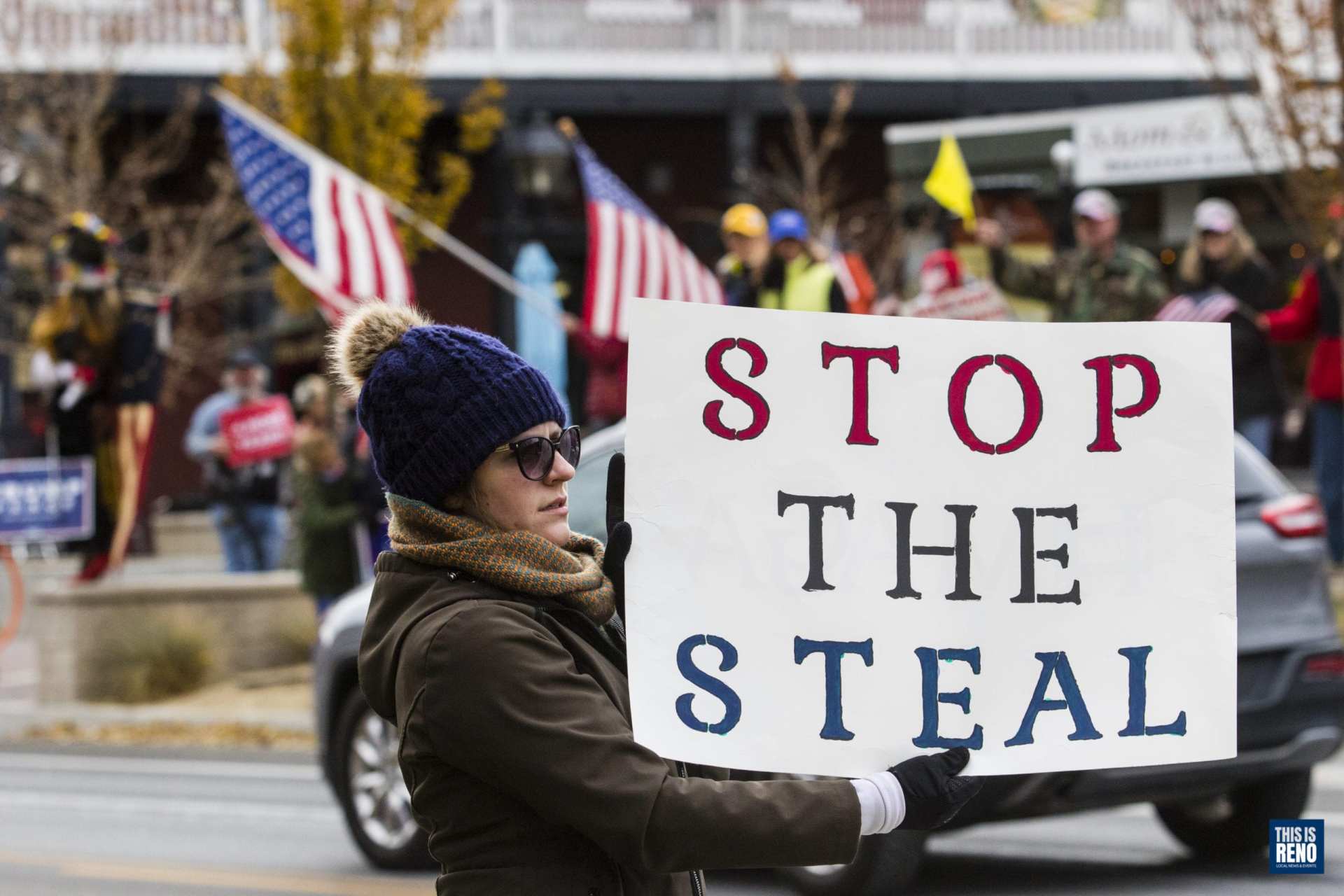 CARSON CITY, Nev. (AP) — Pro-Trump demonstrators convened in front of the Nevada Capitol to hand-deliver complaints of election fraud to Secretary of State Barbara Cegavske and demand she investigate them.

Nevada Republican Party Chairman Michael McDonald and former congressional candidate Jim Marchant told a crowd of about 40 people that the 2020 election had demonstrated the urgent need to change the state’s election laws.

President Joe Biden defeated former President Donald Trump by 33,596 votes or 2.4 percentage points in Nevada. Republicans have challenged those results in court, seeking to nullify the results or declare Trump the winner at various points since November. They’ve alleged outdated voter rolls, problems with signature verification and irregularities stemming from the Legislature’s decision to send all active voters mail-in ballots.

None of the efforts have yielded evidence of widespread, systemic voter fraud, but that hasn’t deterred McDonald or “Stop the Steal” demonstrators who have held routine protests in Carson City since November.

“I’m tired of elected officials saying, ‘There was no voter fraud; no one’s giving us examples of voter fraud,'” McDonald said, standing next to four boxes of what he said were more than 120,000 complaints for election officials to investigate. “Well, you want it: I’m going to deliver it to you.”

The complaints, which McDonald said had been vetted by attorneys, were held in boxes labeled by type of allegation. One was about out-of-state voters, another about duplicate voters. He said that highlighting perceived problems with elections wasn’t about 2020, but future elections.

The secretary of state’s office said it had received them and planned to review and investigate complaints when warranted per its usual procedures, spokesperson Jennifer Russell said.

Marchant, a former state assemblyman who was unseated in 2018, said on Thursday that he still believed the 2020 election was “stolen” from both him and Trump. A lawsuit he filed to challenge his 33,000-vote loss to Rep. Steve Horsford, D-Las Vegas, was dismissed after a Clark County judge ruled she lacked jurisdiction throughout the seven-county congressional district.

“We have to change the laws here. I’ve been fighting to change voter fraud for almost 10 years,” he said. “We’re all awake now.”

He said he plans to run to replace Cegavske, the only Republican elected to statewide office in Nevada, who has repeatedly denied allegations of election interference and defended the integrity of the process.

Allegations like Marchant’s have fractured Republicans in the Legislature. Lawmakers, including some who won tight races, are walking a fine line, pushing changes to Nevada’s election policies but not wanting to fuel conspiracy theories or efforts to overturn Biden’s victory that could alienate voters.

The protest coincided with the closure of the U.S. House of Representatives in Washington, D.C., due to reports of a possible plot to breach the Capitol building. The plot appeared to be connected to QAnon, a far-right conspiracy theory with supporters who believe Trump would rise again to power on March 4.
___
A previous version of this story said former Assemblyman Jim Marchant’s planned 2022 run for secretary of state would pit him against current Secretary of State Barbara Cegavske. Cegavske is term-limited.
___
Metz is a corps member for the Associated Press/Report for America Statehouse News Initiative. Report for America is a nonprofit national service program that places journalists in local newsrooms to report on undercovered issues.