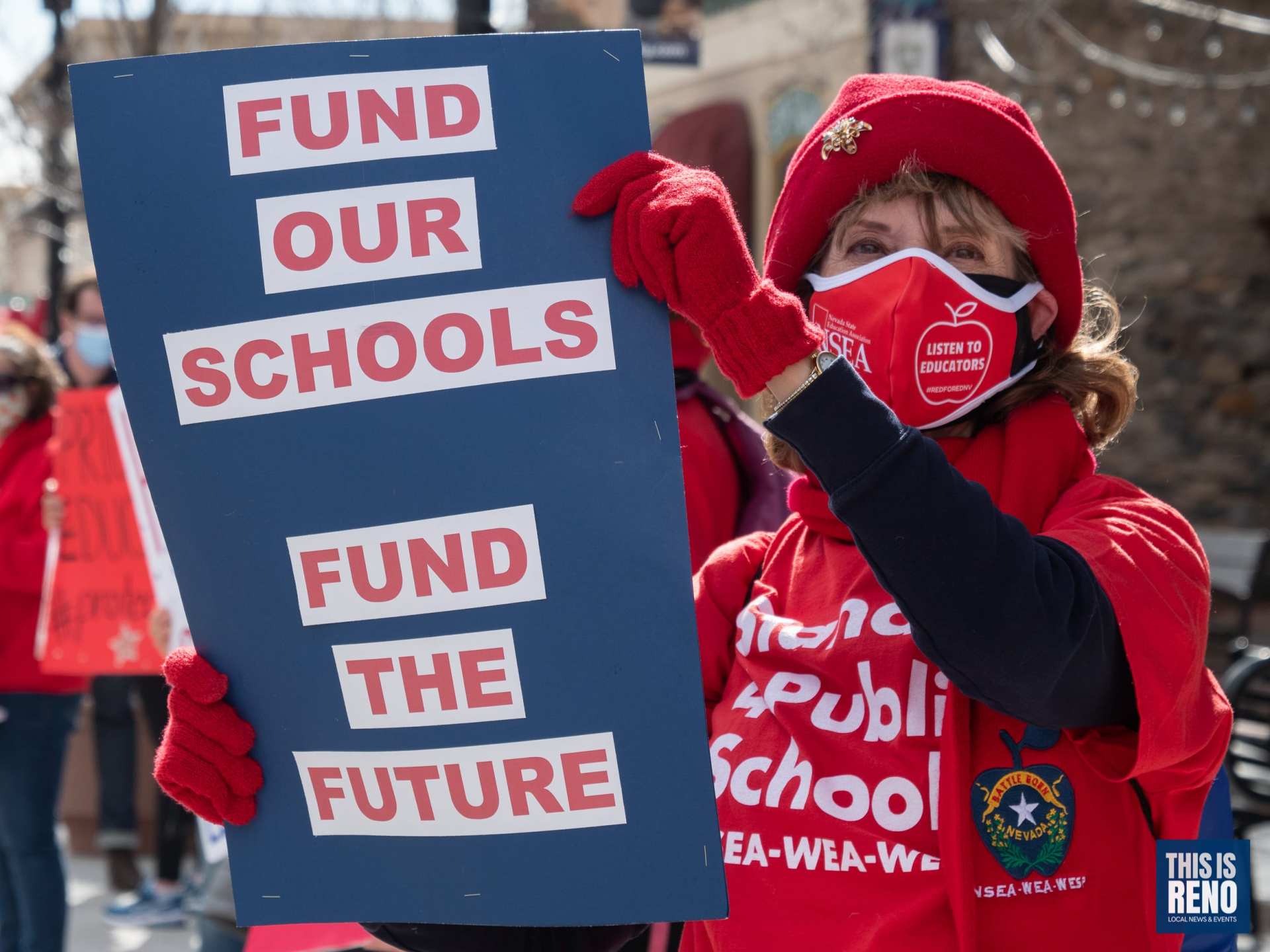 Educators rally for more funding from the Nevada Legislature in Carson City on Feb. 15, 2021. Image: Bob Conrad / This Is Reno.
Share
0
FacebookTwitterPinterestLinkedinTumblrRedditWhatsappTelegramEmail

CARSON CITY, Nev. (AP) — Two tax proposals backed by Nevada’s largest teachers’ union will appear on the ballot in the 2022 election after the Democrat-controlled state Legislature decided not to take action on them by a Friday deadline.

In Nevada, groups that gather 97,598 signatures — 10% of the number of votes cast in the last election — can petition the Legislature to consider proposals.

If lawmakers do not introduce the proposals for consideration within 40 days after the signatures are filed, the measures automatically head to the ballot in the next election.

The first measure would raise the portion of sales taxes dedicated to school funding from 2.6% to 4.1%, pushing sales taxes in Las Vegas to nearly 9.9%. The second proposal would increase the gambling tax rate from 6.75% to 9.75%.
The tax revenue would go to the state’s general fund for unrestricted spending, but the union says the hikes will provide additional funding for K-12 schools.

John Vellardita, the union’s executive director, said that the union’s intent was to “start a conversation” about education funding.

He said he would consider withdrawing the tax proposals from the ballot depending on whether Democratic Gov. Steve Sisolak and the Legislature prioritize education funding.

“This session is going to leave a record on whether or not education was properly funded under Governor Sisolak,” he said. “If not, then the ultimate decision will be made by Nevadans on the 2022 ballot.”

“We are still in the middle of a recession brought on by a global pandemic, and Nevada families are still struggling,” Senate Leader Nicole Cannizzaro said. “Raising taxes on working families and struggling businesses is not how we get Nevada back on track.”

Another tax initiative could go before voters in 2022 if lawmakers, as expected, decide to place a mining tax hike on the ballot.

Although Democrats in the Legislature oppose the initiatives, Republicans hope associating the Democratic Party with taxes will swing the state back in their favor in the 2022 midterms, when Sisolak and U.S. Sen. Catherine Cortez Masto are up for reelection.

Republican consultant Jeremy Hughes said Nevada Democrats are now obligated to make “each and every candidate and elected official go on the record as to whether they support raising taxes for education or the status quo.”