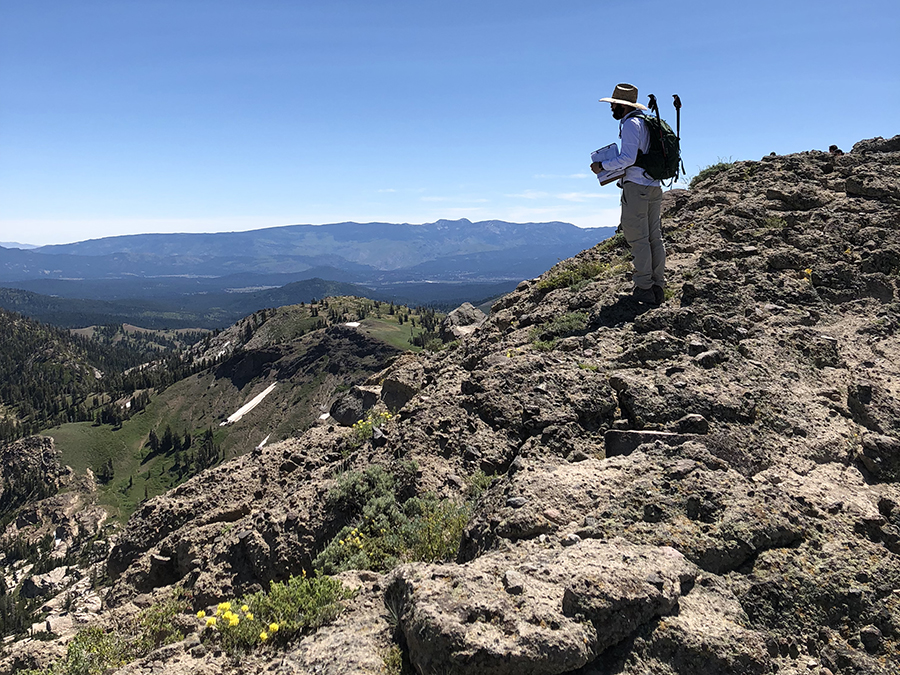 Chris Halsch, a doctoral candidate in the Ecology, Evolution, and Conservation Biology program of the University of Nevada, Reno, surveys for butterflies in the high elevation Sierran study transect of Castle Peak. The survey, ongoing for 40 years, has found a consistent decline in butterfly population. Photo by Matt Forister, University of Nevada, Reno.
Share
0
FacebookTwitterPinterestLinkedinTumblrRedditWhatsappTelegramEmail

RENO – New methods of conservation and management of butterfly habitat may be needed to stem the consistent annual decline in the numbers of butterflies over the past 40 years in the western United States, according to a new study published in the journal Science.

“The widespread butterfly declines highlight the importance of careful management of the lands that we do have control over, including our own backyards where we should use fewer pesticides and choose plants for landscapes that benefit local insects,” Matt Forister, biology professor at the University of Nevada, Reno and lead author of the report in Science, said.

The estimated 1.6% per year decline is consistent with reported declines for other insect groups from other parts of the world. The report is unique in covering a wide area of relatively undeveloped land as compared to, for example, studies from heavily populated areas of western Europe.

“The fact that declines are observed across the undeveloped spaces of the western U.S. means that we cannot assume that insects are okay out there far from direct human influence,” Forister, in the University’s College of Science, said. “And that’s because the influence of climate change is, of course, not geographically restricted.”

The decline was estimated using data from 72 locations with at least 10 years of data per location and more than 250 butterfly species. The total time span encompassed by the study is 42 years, from 1977 to 2018, and the average length of time series from individual sites was 21 years.

The team considered land use, annual climate and season-specific rates of climate change to find the most influential predictors for the decline. The pervasive declines they found advance the understanding of climate change impacts and suggest a new approach is needed for butterfly conservation in the region, focused on suites of species with similar habitat characteristics or host-plant associations instead of conventional conservation and management practices focused on single species.

“Western butterfly declines are associated with increasing fall temperatures across the U.S. wildlands,” co-author Katy Prudic a biologist from the University of Arizona, said. “Conservation, management and restoration on public lands, especially along cooler riparian areas, will be critical for preventing butterfly declines and extinction.”

Management of developed areas can have immediate benefits for insect populations but the impacts of climate change across all landscapes cannot be ignored, the authors said in the report, and society should not assume that the legal protection of open spaces is sufficient without action to limit the advance of human-caused climate change.

The team used both community scientist and expert-collected data, focusing on the western United States, which is uniquely useful for understanding the effects of climate change on insects. The warming and drying trends observed across different types of land use, everything from major cities to protected national parks, from the coast to inland areas, valleys and mountains, were important for revealing climate impacts.

The three datasets used in the study are the Shapiro transect from Northern California, the North American Butterfly Association network of community scientist count data and the iNaturalist web platform of contributed observations. These three sources encompass more than 450 species of butterflies and are complementary in that they represent varieties of geographic coverage and expertise, long timeframes, and differences in the density of urban and agricultural areas. The Shapiro dataset is expert run, the NABA counts are generated by teams of volunteer or community scientists, and the iNaturalist records are contributed by thousands of nature enthusiasts whose identifications are vetted by a machine learning algorithm and at least two human experts.

“We relied heavily on data from citizen or ‘community’ scientists,” Forister, in the University’s Department of Biology and the Ecology, Evolution and Conservation Biology program, said. “Volunteers are generating amazing data these days, and we wouldn’t have been able to study as many locations without decades of hard work from hundreds or maybe thousands of people.”

The study published in Science complements other, recent work on insect declines from the University of Nevada, Reno, which have included contributions to a recent special issue in the Proceedings of the National Academy of Sciences and one of the first reports of declining insect diversity from a protected forest in Costa Rica.

Study uses drones and scanners to determine impact of fall...

Access to rural mental health counseling gets a boost from...