Home Featured Tesla pledged to donate $37.5m to K-12 in Nevada. But there are caveats.
Featured 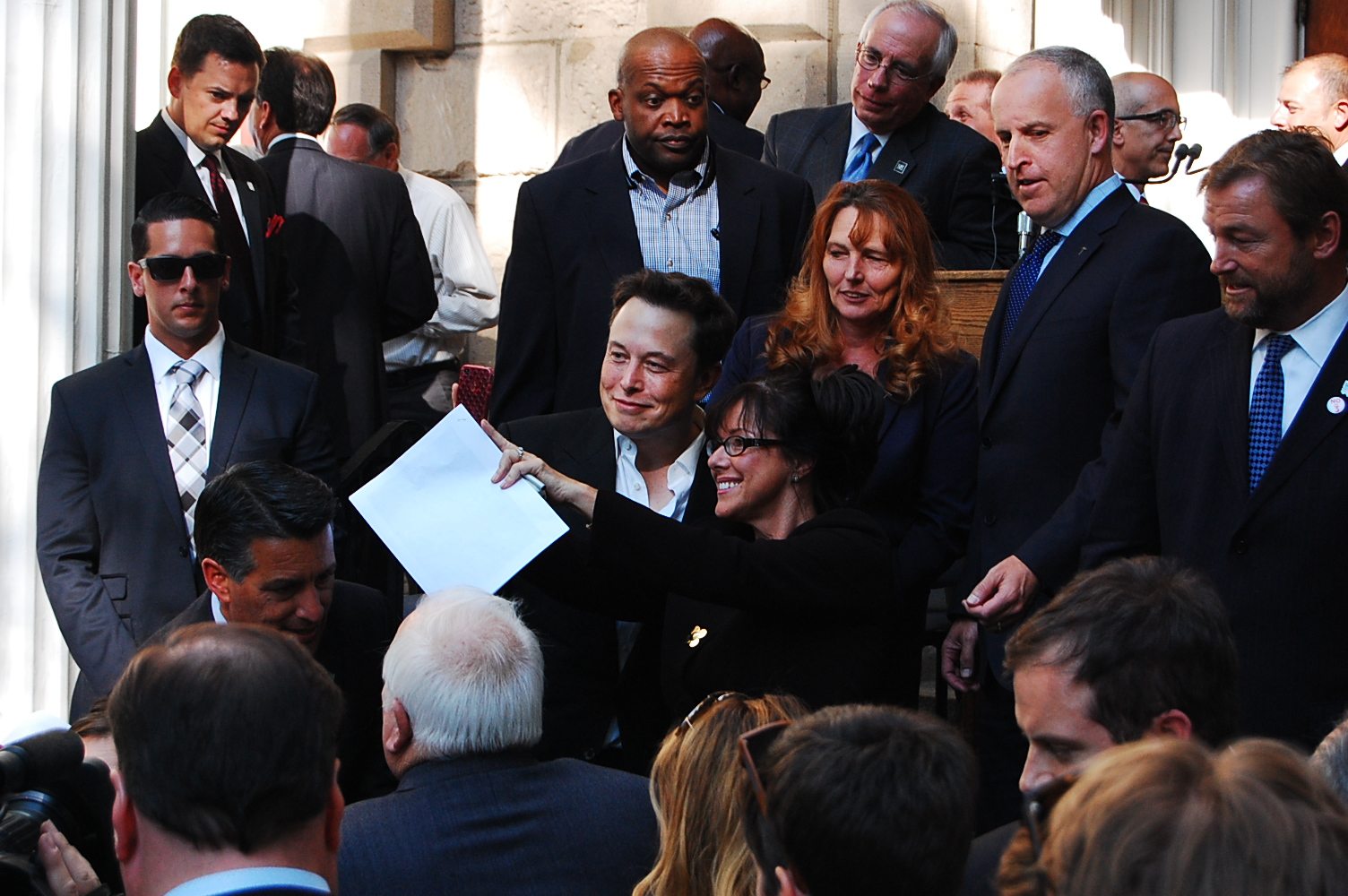 Lawmakers last month seemed surprised to learn the Nevada Department of Education has no direct role in deciding which organizations receive the $37.5 million in donations pledged by Tesla as a part of its sweetheart tax abatement deal with the state.

The Nevada Legislature in a 2014 special session unanimously approved a $1.3 billion tax break — the largest tax break in the history of the state — in order to woo the electric car company into locating its battery factory in Northern Nevada. The $37.5 million pledge to support K-12 education wasn’t codified into any bill (because a state can’t legally make a corporation donate money, said officials at the time). However, it was a publicly understood part of the deal and was highlighted by Republican Gov. Brian Sandoval. The pledge was seen as a way to appease concerns that the state’s already struggling K-12 education system could not keep pace with growth spurred by the battery factory.

After the close of the special session, Tesla Vice President of Business and Corporate Development Diarmuid O’Connell sent a letter to Sandoval committing the company to donating $7.5 million annually for five years — starting in July 2018.

“The funds will be donated to the (Nevada Department of Education’s Education Gift Fund) to augment STEM education on a state-wide basis as well as to fund desired educational programs within the school districts located in the geographic region surrounding the Tesla facility,” read the letter.

According to news articles published in 2014, Sandoval’s chief of staff, Mike Willden, said the state superintendent of public instruction would decide the money’s distribution. Dale Erquiaga held that position in 2014 but left in 2015, years before the first Tesla donations were received.

Last month, Heidi Haartz, the state’s deputy superintendent for business and support services, told lawmakers on the Interim Finance Committee that Tesla “identifies the entities and the amounts those entities will receive.” She described the Nevada Department of Education and its Education Gift Fund as merely an intermediary.

That raised eyebrows among some lawmakers who questioned the process used to determine what organizations received money.

“I don’t remember in that bill anything about Tesla getting to make those decisions,” said Democratic state Sen. Marilyn Dondero Loop, who served in the Assembly during the Tesla special session. “I thought they were donations.”

Tesla did not acknowledge or respond to the Current’s questions about their selection process.

A 2018 press release distributed by the Nevada Department of Education stated Tesla selected the recipients of the initial $1.5 million “in collaboration with an advisory group comprised of Nevada education leaders, business leaders, non-profits and government officials.”

During a December 2018 Interim Finance Committee meeting reviewed by the Current, then-State Superintendent Steve Canavero characterized the department as an active partner in the process, but the specific question of who determines the grant recipients was not asked. (Canavero resigned in early 2019 to accept an education job in the private sector. He was succeeded by Jhone Ebert.)

In a 2019 document detailing the company’s investments in K-12 in Nevada, Tesla listed 11 people as being on an advisory committee started by the company.

State Board of Education member Mark Newburn, a longtime champion of computer science education who also sits on Nevada’s STEM Advisory Council, is one of the people listed as being on the advisory committee. Newburn described the advisory committee to the Current as being “informal.” He recalled speaking with Tesla representatives in 2018 about specific programs and needs within the state.

Newburn says he always understood the $37.5 million pledge to be at the discretion of Tesla, but adds, “They did talk to people.”

Bob Fulkerson, who followed the Tesla special session as head of the Progressive Leadership Alliance of Nevada, said he was surprised to learn Tesla was in charge of deciding what organizations received the donated money. His recollection mirrored the lawmakers who thought of the pledge as money to the state to hand out.

But that doesn’t mean he’s shocked by the revelation.

“To me it’s symptomatic of how the state exists — as an appendage to corporate affairs,” said Fulkerson. “That’s the reason for Nevada to exist. For corporations to make as much money as they can and pay as little as they can in taxes.”

PLAN was one of the few to publicly express concerns about the Tesla tax abatements in 2014. “It was heresy,” he adds.

Some state lawmakers did go on the record about concerns about education. Then state Sen. Debbie Smith, a Democrat, is noted in a Las Vegas Sun article as pointing out that $37.5 million “doesn’t build classrooms.”

In 2018, the Reno Gazette-Journal found that state tax incentives, including the Tesla giga-deal, had deprived public schools of more than $108 million since July 2016.

So who got what?

By January 2020, Tesla had distributed almost $17 million to 29 different recipients, according to a spreadsheet provided to the Current by the Nevada Department of Education. An NDOE spokesperson provided the spreadsheet, along with a 2020 “impact report” created by Tesla, but directed all questions to a Tesla representative who did not respond to the Current.

Tesla representatives have stated publicly and in reports that the company’s donations would be focused on supporting innovative programming, developing teachers into leaders of programs at their schools, creating the infrastructure to support robotics and sustainability learning, and creating workforce development pathways.

The largest recipient of Tesla’s money was the Robotics Education and Competition Foundation, or REC Foundation. It received almost $4.9 million in the first two years of donations and is set to receive at least $1 million more this year.

Nevada had 722 schools statewide, according to 2018-19 data from the National Center for Education Statistics.

REC Foundation is also establishing “robotics labs” in approximately 20 schools across the state. According to a representative from REC Foundation, those robotics labs are designed to be used not just by the schools they are located in but also by surrounding schools, whose students might otherwise have to travel further (typically to a university) to access the robotics equipment needed for higher-level programs.

Clark County School District received $290,000 and Washoe County School District received $293,800 in 2018 and 2019. Initial donations of $50,000 to each school district were described by Tesla in 2018 as “part of the establishment of multi-year special assignment roles in career technical education offices to train and implement programming from within, while also supporting neighboring districts.”

“We’ve got people in there not necessarily benefiting,” she said while emphasizing the need to understand the selection process. “The largest school district is getting a small amount of funding, in my opinion.”

The Nevada Museum of Art is listed as having received $680,040 from Tesla, but the Reno institution has reported it will receive $1.25 million over the next four years.

Other recipients of Tesla money include Code.org, the Discovery Museum of Northern Nevada and UNLV Foundation. A full list is below.

In 2014, Gov. Brian Sandoval and the Nevada State Legislature approved a $1.3 billion tax break for Tesla. As part of that approval, the electric car company pledged to donate $37.5 million — $7.5 million annually, for five years, beginning in 2018. Here are the organizations that received funding from the initial two years of donations.

Nevada Department of Education issues guidance providing flexibility for the...