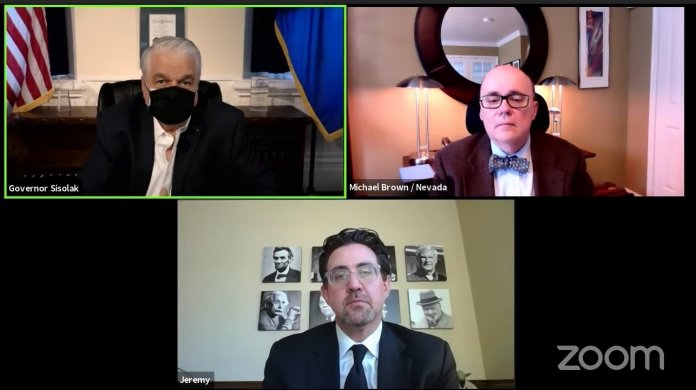 Larry, Curly and Mo get roped into another get-rich quick scheme.
Share
0
FacebookTwitterPinterestLinkedinTumblrRedditWhatsappTelegramEmail

Are you anxious about when you or a family member will get the vaccine?

Nervous because there’s no knowing when jobs around here will return, or if they will be even more precarious than they were before?

Wondering how you’re going to pay the back rent?

Relax. Nevada Gov. Steve Sisolak is confronting Nevadans’ most urgent concerns by focusing like a laser beam on legislation to let a company called Blockchains LLC start its own government on a piece of land in Storey County.

Remember when Sisolak along with virtually every other Nevada grown-up of status promised an NFL stadium would transform the economy and bring boundless prosperity to Southern Nevada? And then construction of the stadium – by far the most significant part of the enterprise in terms of employment and salaries – only ended up hiring about a quarter of the full-time workforce that supporters promised?

Early signs suggest Blockchainsville will be every bit as impressive.

For one thing, inspirational speaker Jeremy Aguero – or as local governments and big business prefer to call him while partnering, “our consultant” – was on board with the governor at a press event Friday, rhetorical pom poms customarily raised to the heavens, to impart to his fellow Nevadans the Good News about the Salvation that will be Cybercurrency County.

What could be more reassuring than predictions of imminent and broadly shared prosperity from the same non-economist who told everyone the stadium would employ four times as many construction workers as it actually did?

In these troubled times, how gratifying to see a Nevada governor call yet again on the perennially rosy analysis of Aguero,  who predicted in 2007 that the Southern Nevada housing market, and hence its economy, would enjoy “a gradual recovery by late 2008.”

Sisolak was also joined Friday by Michael Brown, director of the Governor’s Office of Economic Development. Brown’s prior claim to fame was as a glad-handing executive working tirelessly to make the world safe for a transnational mining conglomerate. Which is pretty old school.

But Friday he showed he had all the chops of a cutting-edge 21st century economic development professional, including that profession’s most indispensable move, the unabashed willingness to say the words “game changer” out loud and with a straight face.

Brown went there, by the way, while going over “core statistics which we’ve worked with Jeremy to prepare.” For instance, the construction phase of the project would directly employ 79,400 people, Brown said. That presumably works out to roughly 19,850 employees in non-Aguero math.

But the real star of the show Friday was your governor, who implored his fellow Nevadans, including and especially those currently filling temporary jobs as legislators, to please, please, please stop laughing and mocking and rolling your eyes, and start taking Painted Rocks Smart City (its actual name, lol) seriously.

“It is my hope,” the governor said, “that starting today, we can have open, honest, productive conversations about how this could work” and “not simply write if off before the legislation’s goals, mechanics and consequences can be discussed.”

Sisolak is on to something: Before letting a company set up its own government the “mechanics and consequences” should be thoroughly discussed.

As this is written Sisolak’s Blockchains legislation has yet to be officially introduced, so we don’t know for sure exactly what activities are so special and innovative that they must not be burdened by the same rules and regulations that apply to mere mortal Nevadans.

But there are countless questions about the proposal, ranging from whether it will have water to whether the townsfolk will be allowed to speak freely without being erased from the matrix.

Some of the other questions include but certainly are not limited to:

Maybe the answers to some of those questions are super simple. In their performance Friday, Sisolak, Brown and Aguero indicated they seemed to think so.

But the answers to those and other questions are bound to have implications that will be really rather complicated, warranting the “open, honest, productive conversations” Sisolak is urging.

Which brings us to the Nevada Legislature

Even a more or less casual observer (raises hand) will have noticed over the years that your Nevada Legislature is a part-time, short-lived, occasional affair that ends each and every session with a flurry of ill-considered actions so as to meet that highest and most revered achievement within Nevada state legislative branch circles, finishing, if not on time, at least close to it.

The most consequential fact of this legislative session will be passage of the federal relief bill making its way through the U.S. Congress. But however much that bill saves Sisolak and the Legislature, both fiscally and politically, it won’t, as an example, pay for a revised state education funding formula that, unless adequately financed, promises to do more harm than good.

Neither legislators nor the governor have proposed what could be described as an aggressive agenda to help Nevadans navigate the troubled times now and ahead. But whether it’s education, mental health, justice reform, energy and the environment, financing for public transit and affordable housing, working conditions, student loan debt relief, fixing the damned unemployment system — pick your passion — a lot of Nevadans are counting on legislators to at least pass some nice if modest advances on issues that matter.

Do Sisolak and legislators really want to bog down an already clunky, time-constrained and structurally hobbled system on techy techy pie-in-the-sky esoterica? Especially during a session when members of the public, who will have far more and better questions than the examples above and in many cases a direct interest in the answers to such questions, can’t even be in the building?

And all for a project promising to invest a billion dollars, which is to say about the same as the cost of your standard slightly upscale Strip hotel casino a quarter century ago?

Serious deliberations, of the sort the governor says he wants to see, on the industry-specific tax alone would be a heavy lift for Nevada’s state temps, er, “citizen Legislature.”

Sisolak is asking that we take this scheme seriously.

Fine. Let’s start with some analysis that is independent of a) a political insider who has spent his adult life shielding the mining industry from responsible taxation, b) a consultant who gets paid to tell his clients things they want to hear, and of course c) Blockchains LLC and its big-footing campaign contributor of a founder, Jeffrey Berns.

And then, in the unlikely event independent objective analysis indicates it is in fact a reasonable idea to give some libertarian tech bro his own town just because he made a cybercurrecy killing that one time, let’s acknowledge that seriously examining the “mechanics and consequences” of the proposal is not something that is going to happen in the confines of a time-constrained pandemic-era legislative session.

Nevada earns $1 million grant to help plan how to...