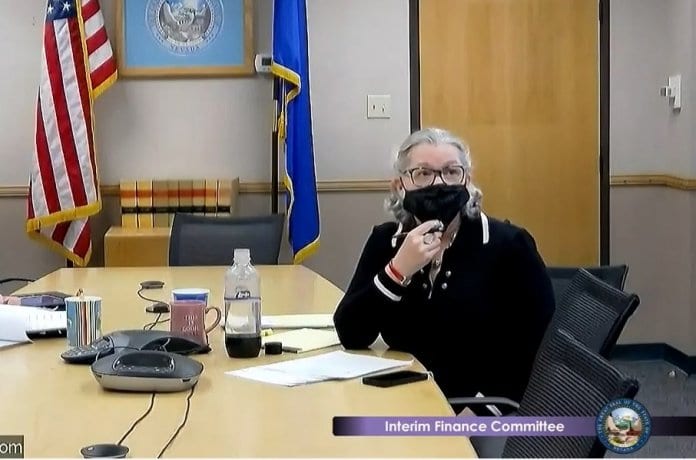 DETR Director Elisa Cafferata speaking to the Legislature's Interim Finance Committee in December, when the backlog was overwhelming the division.
Share
0
FacebookTwitterPinterestLinkedinTumblrRedditWhatsappTelegramEmail

CARSON CITY–Nevada Department of Employment Training and Rehabilitation (DETR) Director Elisa Cafferata told state legislators Wednesday the idea that hundreds of thousands of qualified people had been denied unemployment benefits through the Pandemic Unemployment Assistance Program (PUA), or any other unemployment program, was ill-informed.

She pointed both to people’s lack of understanding of the federal rules governing unemployment and a “tsunami” of fraud the department has dealt with since the onset of the COVID-19 pandemic nearly a year ago.

Senator Keith Pickard took issue with Cafferata’s presentation, noting the overwhelming number of complaints he said he’s received from constituents who have not received benefits to which they believe they’re entitled.

Cafferata reiterated that the idea there are hundreds of thousands of people whose benefits have been denied for no good reason “is not an accurate characterization of where we are or where we have ever been,” adding that the PUA claims which have been denied have mostly been the result of claims filed with no supporting documents to prove identity or past employment. She said these are likely to have largely been fraudulent claims.

“So, yes, we have found hundreds of thousands of people to be ineligible because they haven’t supplied documentation of any kind, and I do think that has to be celebrated that those represent hundreds of thousands of fraudulent claims that we did not pay out, and if we did pay out, you’d probably be at the front of the list saying, ‘Why’d you pay all those frauds?’ That’s right,” Cafferata said to Pickard.

Cafferata also reported that her department had blocked $2 billion in attempted fraudulent claims and recovered $100 million in wrongfully paid claims.

In March of 2020 when the closure of non-essential businesses was ordered by Governor Steve Sisolak, weekly unemployment claims jumped from 20,000 to nearly 370,000 in a matter of weeks. DETR has since paid out $9 billion through the various unemployment programs, to include PUA. This number is more than the department had paid out in the previous 12 years combined. It reflects the fact that unemployment in Nevada soared for a time to 30%, the highest ever recorded.

These benefits have not always been delivered to recipients in a timely manner. According to Cafferata, this has been the case for several reasons—including not only the huge number of claims made, but also the fact that PUA is a new program.

PUA is specifically designed for people who work in the “gig economy,” people who are self-employed or work on contract. Prior to the pandemic, these people were ineligible for unemployment assistance, and Cafferata explained that between administering PUA and regular unemployment during a time when those recipients were receiving an extra $600 a week in federal assistance created particular challenges for DETR.

“We couldn’t do both of those things in our existing system, and so we created a separate system for the gig workers unemployment,” she said, adding that the separate systems—which do not interface—have caused confusion for claimants who may not know what type of unemployment assistance for which they qualify.

Cafferata also addressed the huge backlog of claims DETR experienced over the summer and the work done to clear it by the DETR Emergency Response Strike Force created by the governor in August as well as Welfare Division employees working overtime to process claims.

She explained that as of December 2020, DETR had received nearly 1.6 million initial claims for benefits—a number that is larger by tens of thousands than the state’s entire workforce. She noted that 95% of backlogged claims have been addressed.

It was also noted that the strike force, in a 38-page report on its work released late last month, has made recommendations on how DETR can prepare for future situations, similar to the one resulting from the pandemic, should they arise. Recommendations include recording training sessions for later use, keeping manuals updated and cross-training welfare eligibility staff in unemployment assistance. The strike force also recommended creating a position to maintain contact with claimants and advocate for their issues at DETR.  According to public information staff, DETR is working on implementing this suggestion with existing staff.

There are still issues remaining to be resolved, and there are requests for appeals to be examined from people who believe their benefits have been wrongfully denied. The strike force’s leader, former Nevada Assembly Speaker Barbara Buckley, told media that at the start of this month there were about 900 requests for appeals waiting to be scheduled in the regular unemployment program and an additional 900 waiting to be scheduled in the PUA program.

Cafferata  said DETR is getting through at least 100, and up to 200, appeals per week.

One of the Nevadans who is appealing the denial of a PUA claim is 73-year-old John Fenyes. He helped start the Allegiant Air low-cost airline in the late 1990s. In late 2019, he started a new travel and tourism business called Silver State Travel Associates and began working as a consultant for airlines to bring new travel routes to Nevada.

Fenyes had to shut down his fledgling business in March 2020. He first applied for PUA benefits in May of 2020 and said his dealings with DETR have been an ordeal since.

“I filed in May,” he said. “I heard nothing from them, so I reached out to them in June. They told me everything was fine, and they were just behind. Then when nothing happened, I called them again. And that person told me that they needed the back of my driver’s license and social security card, which I’d already sent. But, OK. I sent it again.”

He said in the ensuing months he made five different calls and received five different responses about the status of the claims he’d been filing weekly. In December, he said he got a notice saying that he did not meet the “COVID-19 criteria” required to receive PUA. He called again in an attempt to get further explanation of the denial.

“Mind you that it takes two days to get through to them,” Fenyes said. “The day I talked to [a] particular young lady, it took me two hours not to get the recording that says, ‘Go to the website because we can’t take any more calls.’ And then when I finally got in around 11:30 a.m. … six-and-a-half hours later is when she answered the phone.”

Fenyes said the woman told him he didn’t need to file an appeal and that he’d simply been making a filing error. She told him she was going to put him on hold to help straighten things out.

“As soon as she put me on hold, it disconnected,” he said.

Now, he is filing an appeal to see if he can get PUA benefits.

“I’m to a point where I really am in trouble,” Fenyes said. “I had to move from Reno. I moved in with my son and his wife, and my wife also. They had a two-bedroom place they were renting. But that was just sold. … They had to move, and the best they could do is a one-bedroom apartment.”

Fenyes and his wife will soon need to find another place to stay.

“We’ll probably be leaving Nevada and going to my older son in Texas until … the resolution on my deal is done,” he said. “To this day, just so you know, the only correspondence I’ve ever gotten from unemployment is a denial letter. That’s it—nothing else.”

According to DETR staff, all determination letters for regular unemployment and PUA include instructions on how to file an appeal.  PUA appeals can only be submitted online through the EmployNV.gov portal. To file an appeal, claimants need to log in to their EmployNV accounts, click on the Unemployment Services link and select “File an Appeal.”

Regular unemployment claimants must follow the appeal instructions included in the determination letters they receive in the mail. These appeals must be in writing, signed and should include the claimant’s social security number and the reason for filing the appeal.

DETR staff said, “A general rule of thumb is to call  Wednesday to Friday after 10 a.m., as Mondays and Tuesdays are the busiest days of the week as folks are calling in following the weekend.”

This week DETR also asked callers to listen closely to directions on its phone messaging system after making minor changes to the formatting.

Claimants have an “11-day window from receipt of their determination to file an appeal. Appeals filed after the deadline will be considered on a case-by-case basis” and people needing an interpreter should include this information in their appeal requests.

People who are filing an appeal also should be aware that they should continue to file weekly claims to protect any benefit rights that may be established as a result of the appeal.

Once an appeal has been received and reviewed, claimants will receive additional information regarding the appeal in their EmployNV mailbox or in ui.nv.gov under the “My Documents” tab.