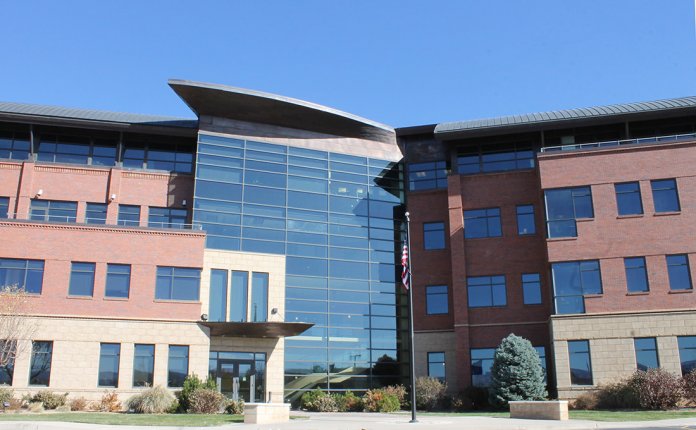 This office building in Grand Junction, CO is the new headquarters for the U.S. Bureau of Land Management. Existing tenants in the building include Chevron and the Colorado Oil and Gas Association. (Photo: BLM)
Share
0
FacebookTwitterPinterestLinkedinTumblrRedditWhatsappTelegramEmail

GRAND JUNCTION, COLO.–The Biden administration is reviewing the Bureau of Land Management headquarters’ recent move from Washington, D.C., to western Colorado, even as the state’s congressional delegation has united in a bipartisan pushback to any attempt to reverse the decision.

An Interior Department spokesperson said this week that the department’s “new leadership will work with BLM career staff to understand the ramifications of the headquarters move and determine if any adjustments need to be made.”

“We are committed to engaging with a number of stakeholders through this process, including Tribes and Members of Congress,” the spokesperson told States Newsroom. “BLM’s important mission and the communities served by the agency deserve a deliberate and thoughtful process.”

Critics said the effort would gut the agency by diminishing its influence in the nation’s capital and forcing out experienced career staff who worked there.

But Democrats in Colorado were always more supportive of the idea, which a Grand Junction business group said could mean about $45 million annually for the local economy, and they’ve been pushing President Joe Biden to stick with the Trump plan.

House Republicans, the state’s two Democratic senators and Gov. Jared Polis, a Democrat, have all written to the new president to make the case for keeping the headquarters in Grand Junction.

The move had a significant impact on the economies of the Grand Junction and Lakewood, Colo., areas, and improved the agency’s knowledge and culture, Polis said.

“While the initial implementation was flawed, now that this office and these individuals and families are settled here, they are an invaluable part of their respective communities and it would be highly disruptive to undo this effort, as well as a waste of the public resources invested to date,” he wrote.

“For these reasons and more I remain extremely supportive of the Bureau of Land Management keeping and expanding their national headquarters in our great state.”

New Interior secretary in the wings

The department’s new leadership would presumably include Secretary-designate Debra A. Haaland, who, as a Democratic House member from New Mexico and chair of the Natural Resources Committee’s panel that oversees public lands, criticized the move as it was occurring.

At a December 2019 news conference, she focused on the burden the move placed on career employees in Washington and the lack of consultation the administration had with tribes prior to making the decision. There was “no justification” for the reorganization, she said.

“It is just a way to destroy the agency and make it easier for this administration to sell off our public lands to the highest bidder,” she said.

A spokeswoman for Haaland’s House office deferred comment to the Interior Department, which did not elaborate on Haaland’s position beyond the spokesperson’s statement.

Freshman Colorado Democratic Sen. John Hickenlooper met virtually with Haaland on Tuesday and “made the case that, done correctly, we can better protect and manage our public lands by having a BLM headquarters out west. I look forward to working with her when she’s confirmed as Interior Secretary to make this a reality,” he said.

In a letter to Biden, Hickenlooper and U.S. Sen. Michael Bennet, also a Democrat, said the agency should move more staff to Grand Junction. Only 41 employees were assigned to move last year.

“While this is a reasonable start and is appreciated by the Western Slope, the job is far from finished,” they wrote.

The issue has brought together unusual political allies, putting far-right figures like Boebert and establishment Democrats like Bennet and Hickenlooper on the same side, while dividing state Democratic leaders from their traditional allies in the environmental community.

But the outside groups who opposed the move when it was being discussed largely still do.

“I think it’s funny that the only people who want it to stay in Colorado are politicians from Colorado,” said Patrick Donnelly, the Nevada state director for the environmental group Center for Biological Diversity.

The move was part of a “systematic dismantling” of the agency, Donnelly said. It would be impossible to undo that dismantling without returning the headquarters to Washington, he said.

Former BLM Director Bob Abbey, who held that role under former President Barack Obama from 2009 to 2012 before starting a consulting business, said Wednesday he didn’t “see any sound rationale” for the move to Colorado.

Abbey was a vocal critic of the move in recent years, writing opinion columns and appearing at the same 2019 news conference as Haaland.

The Trump administration had argued that the BLM should be headquartered in the West because more than 99% of the land it manages is in the Western half of the country.

But the BLM maintains field offices throughout the West and 97% of its workforce was already stationed there, so the move only served to undercut the agency’s influence in Washington’s power centers, Abbey said.

The agency lost easy access to lawmakers and interest groups by moving, and removed itself from important conversations within Interior when it came time to distribute limited resources, he said.

“They’re not even at the table,” he said.

The issue is likely to come up at Haaland’s confirmation hearing, which would be held by the Senate Energy and Natural Resources Committee, on which Hickenlooper sits. No date has been set yet for the hearing.

Neither Hickenlooper nor Bennet have indicated whether their votes for or against her confirmation would be based on her position on the BLM headquarters location.

But in an evenly divided Senate—and with Republicans already signaling they will oppose her confirmation—every Democratic vote counts.