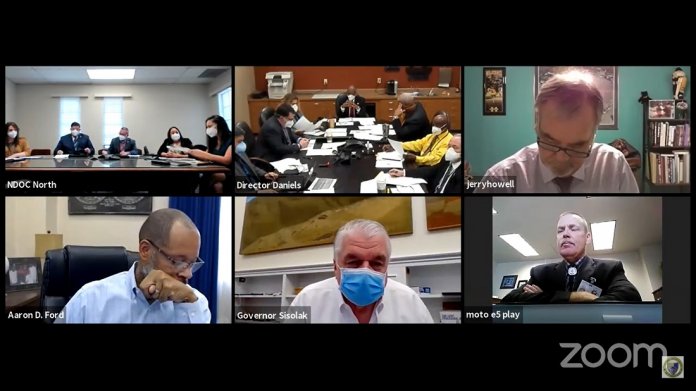 This story was originally published by Nevada Current

CARSON CITY–Nevada prisons will no longer seize 80% of the money deposited for inmates by families and friends. Instead, the state will take half the money, which is used by prisoners to buy necessities such as food, soap, toothpaste and toilet paper.

Gov. Steve Sisolak, Attorney General Aaron Ford and Secretary of State Barbara Cegavske, acting as the Board of Prison Commissioners, voted Monday to rescind a regulation imposed by Department of Corrections Director Charles Daniels last year without the board’s approval.

Daniels said the increase was designed to bring the state in line with the constitutional mandates of the victims’ rights measure Marsy’s Law, which calls for “full and timely” restitution for victims of crime.

The state collected some $220,000 in the few weeks the policy was in effect. Sisolak, Ford and Cegavske want the difference returned to inmates’ accounts. But a deputy attorney general said he’s not sure that’s possible because the money was collected by the state, and by law, should be turned over to victims.

“But it was collected under a regulation that this Board never approved of, correct?” Sisolak asked.

He was informed state law allows the Director of Corrections to issue regulations unilaterally.

The policy change occurred without warning on Sept. 1, when prison inmates watched the state’s customary deduction of 20% quadruple overnight.

But in October, Sisolak and other members of the Prison Commission balked after families and friends of inmates protested what they called the unreasonable seizure of money they say helps their loved ones survive behind bars.

The Board suspended the new policy in October, ordered a temporary reversion to the previous deduction of 20%, and a review of procedures in other states that adopted Marsy’s Law.

That review revealed a more liberal application of the law’s requirements elsewhere.

Nevada “appears to be more aggressive” in its pursuit of victims’ rights, than other states, officials told Sisolak and the others. The department backed off Daniels’ decree of 80% in favor of 50%, which puts it in line with California.

“Any percent seems unfair considering many of these incarcerated folks are using the funds to pay for necessities like soap and sanitary napkins or phone calls to their families,” Laura Martin, Executive Director of Progressive Leadership Alliance of Nevada told the Current. “If the state is taking their money, will they provide these items for free?”

ACLU attorney Holly Wellborn said the government, in its effort to comply with Marsy’s Law, “cannot do so in a way that leaves a person destitute.”

Wellborn cited state law, which requires the deduction be “reasonable.”

“In my opinion, he gets three square meals a day. He gets free health care, which I do not get,” Michelle Serbin said during public comment of the person who victimized her family. “I would hope we would take as much money as possible from them so we can get our money.”

But food and supplies provided by the state are “neither significant in quantity or quality,” according to Denise, who said her husband is an inmate.  She sends him $120 a month while caring for the couple’s blended family of six children.

“Families have never asked for an end to restitution,” said Jodi Hocking of Return Stronger, an inmate advocacy group.

A popular program that allowed families to deposit up to $500 twice a year without any deduction has been discontinued and will not return.

The meeting was punctuated by complaints the state was cutting off speakers during public comment.

“What happened to the last caller?” Sisolak asked.  “Did she get cut off mid-sentence?”

“I think she ended the call,” a staffer said.

But another caller who was cut off called back to say she was “muted by the host.”

“Comments were ended at the Oct. 8 meeting because there was so much chaos,” one speaker complained.

Others voiced concerns the meeting failed to comply with provisions of the Nevada Open Meeting Law because exhibits to agenda items were not publicly posted.

Elodie Hutchison, whose husband is an inmate who recently recovered from COVID-19, complained visitation has been suspended for almost a year.

“Besides two free phone calls a week, there is no such thing as family connection,” she told the Board.

“We lack, as attorneys, any sense of transparency from the director,” she said. “I have clients who are in the hospital and I have zero information on them.”

“We may be the only state that has not addressed elderly, frail inmates close to getting out,” Rasmussen said.

Daniels said 726 members of the Department of Corrections staff, about 26%, have been vaccinated against COVID-19.

He said 749 inmates have been diagnosed with active Hepatitis C infections.