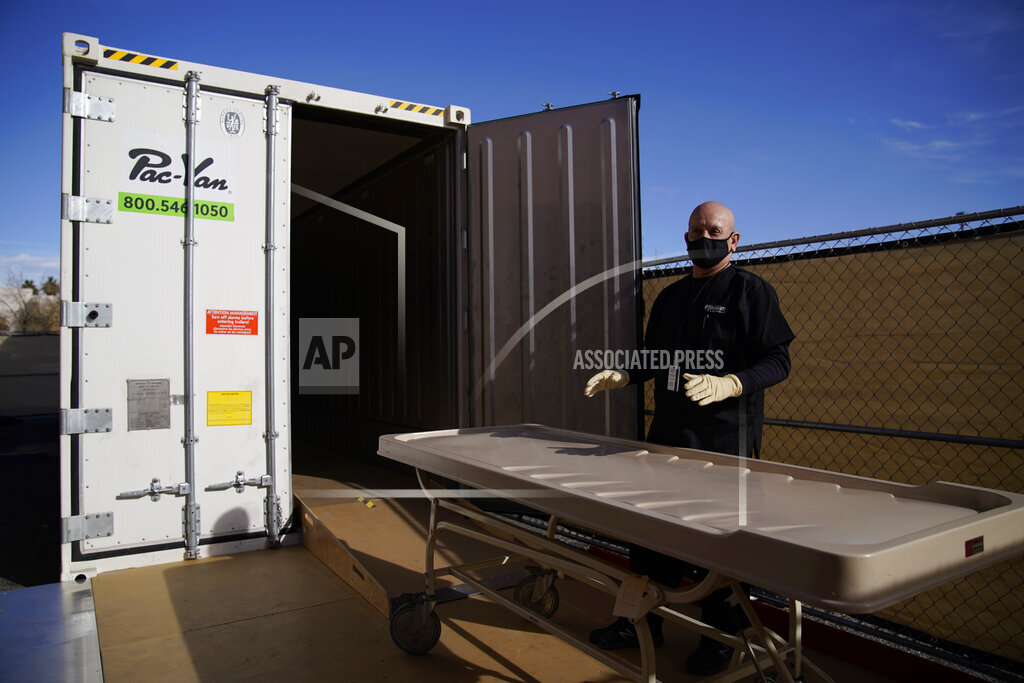 Michael Murphy, a consultant serving as interim Clark County coroner, gives a tour of a refrigerated trailer at the coroner's office Friday, Jan. 8, 2021, in Las Vegas. The trailer is currently unused but is in place in case of a surge in coronavirus deaths. (AP Photo/John Locher)
Share
0
FacebookTwitterPinterestLinkedinTumblrRedditWhatsappTelegramEmail

By SAM METZ and KEN RITTER AP/Report for America

LAS VEGAS (AP) — Funeral homes and the county coroner in Las Vegas are preparing for a post-holiday spike in coronavirus deaths by adding storage space — including refrigerated trailers with special shelving — for corpses.

Michael Murphy, a consultant serving as interim Clark County coroner, said southern Nevada was fortunate in procuring the portable metal containers early in the pandemic because jurisdictions throughout the country are now competing for ways to store bodies awaiting burial or cremation.

“If you don’t get them for your community, they are going to another community,” Murphy said. “They’re getting hard to come by.”

From El Paso, Texas, to Chicago and Brooklyn, New York., medical examiners and coroners have relied on refrigerated trailers for storage as morgues become overcrowded.

Nevada has reported nearly 3,400 confirmed deaths since the start of the pandemic, including more than 2,500 in Clark County, where most of the state’s population resides. State health officials have reported more deaths this week — 243 as of Thursday — than any week since March.

Officials have reported almost 244,000 confirmed cases of COVID-19 statewide since the start of the pandemic, meaning more than one of every 13 residents of the state has tested positive. They anticipate a spike in cases and deaths in coming weeks, following Christmas, Hanukkah and New Year’s gatherings.
Murphy said the coroner’s office distributed nine storage containers ranging in length from 20 feet (6 meters) to 40 feet (12 meters) to funeral homes and had three more on the way.

In case of a surge, one container was left in the coroner’s office parking lot in mid-December. It’s not being used but could add space for up to 60 bodies in addition to the 100 inside the morgue.

“This is designed specifically for the emergency process, not necessarily for the day-to-day unless we have to use it,” Murphy said.

The metal containers have had several uses since April. During the hot summer, Clark County used them to keep swab kits cold at casino parking lot test sites. When the weather cooled and mortuaries started filling, they were moved to funeral homes.

“Everything we do is related to the dignity of the people that we serve,” she said.
In 13 years in the business, Sussman said she’s never experienced the current demand for services.

Crowds along the Las Vegas Strip on New Year’s Eve had her worried about spread, and she’s concerned funeral homes may face another surge on top of the current one. But she expressed confidence the coroner’s office and funeral homes were being proactive in anticipating demand.

Murphy afreed that the goal is “to make sure every family and every decedent is treated with the dignity and respect they deserve.”

“That doesn’t change because we’re using a refrigeration unit,” he said.