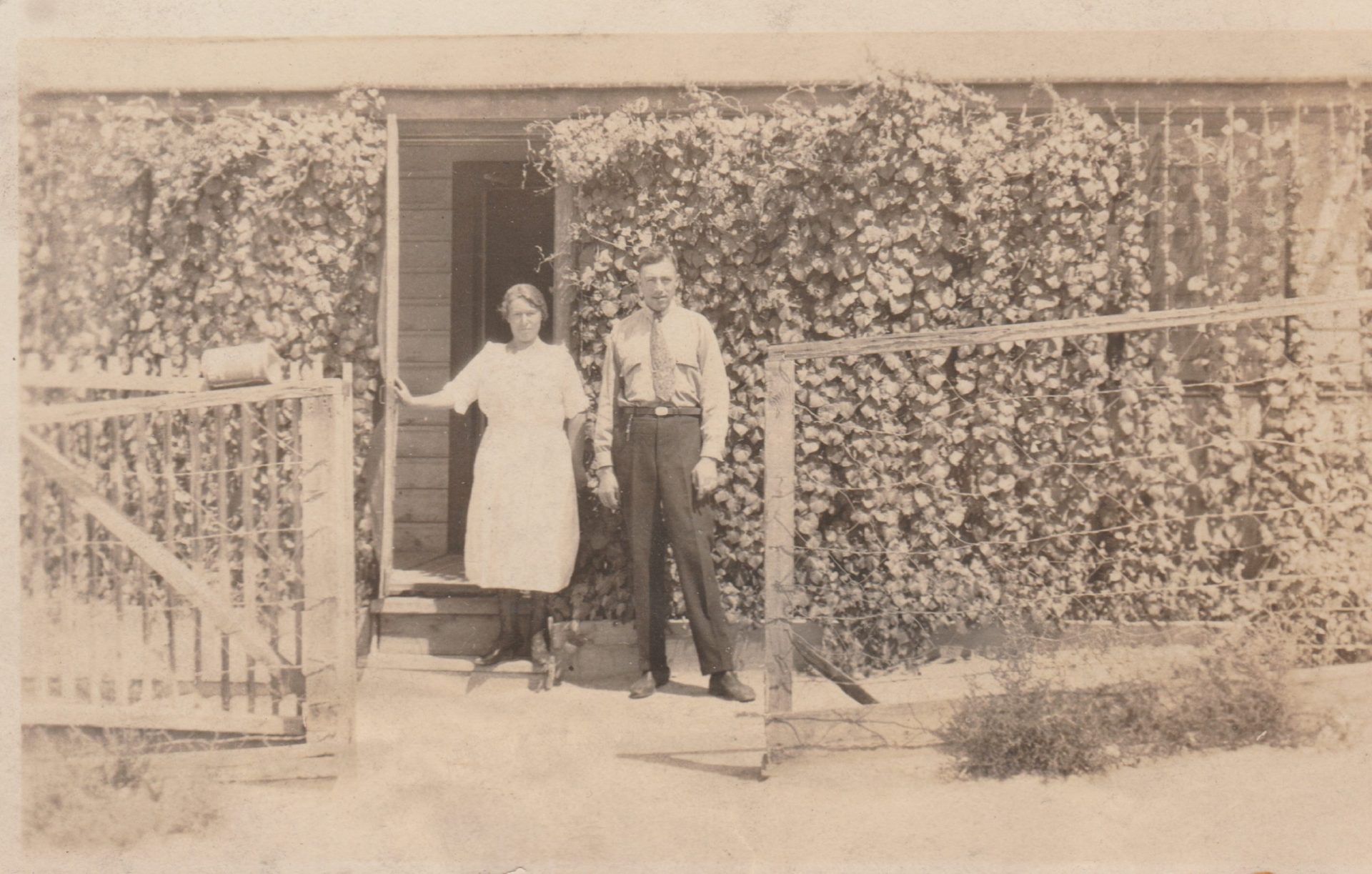 Mark Meganck is a qualified guide in the medieval city of Bruges, Belgium, a major tourist destination in Europe. In mid-November, while researching the American branch of his family, he stumbled across our article, “Nevada’s original pandemic,” which included a look at how Tonopah had been hard hit in the 1918 flu pandemic. Meganck’s grandparents lived in Tonopah for a short time just after the pandemic, arriving nearly 100 years ago—Dec. 11, 1920. This is the second of three articles where he takes us through his family’s history in the Nevada desert. Read the first part here.

When we left off from part 1, Mark had just connected with his mother’s cousin Bobby, the son of Adronie Vangheluwe aka Edna Nort, aka Edna Higgins, and was gathering a number of stories about his American family.

I was lucky enough to visit my second cousin Bobby and his wife Beverley Higgins in Leesburg, Florida, in 2013, after attending a conference in Destin, Florida. It’s from that visit and a number of Skype calls and other correspondence I learned a number of stories about my American family.

One of the most remarkable stories that came to my attention through Bobby was that Eugenie Slabbinck, Edna Nort’s mother, made the voyage all alone in March 1920 (six months before my grandparents’ departure) to New York, after which she took the train to Tonopah.

Initially I did not believe this story, but a photo of Eugenie with Edna, Albert Nort and children taken in Tonopah disproved all my doubts. It is unbelievable that a mother from Belgium visits her daughter and family in the westernmost town of a desert in Nevada and especially in that time with limited means of transport. You need guts for this! For me it was obvious that mother Eugenie (my great-grandmother) would return home after a few months.

In October 2020, before I intended to publish this story, I started searching the newspapers of the Tonopah Daily Bonanza using the search term “Albert Nort” or “Edna Nort.” You cannot believe that these newspapers still contain a wealth of data.

In the newspaper of July 29, 1921, I found an article entitled: “War romance culminates in wedding here.” This article literally read, “A union that was brought about as a result of the late world war was consummated yesterday when Mrs. Eugenne Slabbachke, mother of Edna Nort, and Richard Van Denbosche were made man and wife.”

With the knowledge in mind that in the Census of 1920 only five Belgians were nominally mentioned out of a total of about 3,200 inhabitants of Tonopah, I was 100% sure that this was about my great-grandmother Eugenie Slabbinck who got married a second time. I had already heard the story from Bobby that her first husband had disappeared without a trace.

It was further written that, “The contracting parties are both natives of Belgium and came to this country following the signing of the armistice. Both passed through harrowing experiences during the invasion of their country by the Germans. Mrs. Van Denbosche having been left for dead with her throat severed. She made a complete recovery, much to the surprise of the attending physicians.”

I also found the original marriage certificate afterwards via FamilySearch. That was a unique moment for me that you should hear in an American newspaper from 1921, that your great-grandmother was almost dead during WWI and that she remarried in Tonopah. I even doubt my mother blessed was aware of this.

My grandparents were very hard workers, but they didn’t talk much about their time in America. I, myself, was still too young anyway.

What also struck me while searching the Tonopah Daily Bonanza of the period 1906-1922 was the fact that each time on page four of this newspaper a section “Personal” could be consulted. In it you could read who left or arrived by train in Tonopah with the reason for their stay or departure. I was able to learn the following from the newspaper of June 8, 1921: “Morris and Bert Nort, sons of Mr. and Mrs. Al Nort who have been attending school at St. Mary’s Academy, Rio Vista, California, arrived home this morning to spend the summer.”

I think it’s fantastic that after a century, thanks to digitization and the Internet, you can still deduce many stories from reading such newspapers.

Come back for part 3 where we’ll share the final installment of the stories and discoveries Mark Meganck uncovered through his correspondence with Bobby and additional research.