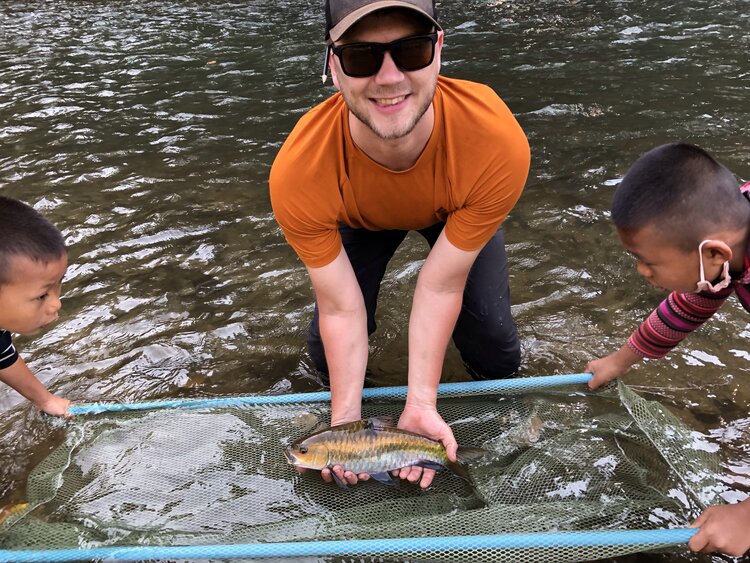 RENO – Freshwater fish reserves are extraordinarily successful at protecting multiple species of fish, a new study of a network of community-based reserves in Thailand has found.

He mapped more than 50 reserves, all community organized and managed independently of government support, throughout the river and its branches. The area supports more than 40 species of fish, ranging from large minnows to catfish to needlefish. The results are published this week in the scientific journal Nature in the article “A network of grassroots reserves protects tropical river fish diversity.”

“The conservation benefits of each reserve established independently by local Pgagayaw, or Karen, indigenous communities are remarkable, and the collective benefits for fish within the entire network of reserves are even greater,” Koning said. “Twenty-seven years ago, one community created a reserve in an effort to protect their fish, and since then reserves have spread among communities throughout the valley. It’s a great story of effective community-based resource management.”

“During six weeks of fieldwork related to this study, Martin and I lived with friends in riverside villages, but made the 90 minute drive to Mae Sarieng for internet access on a couple of weekends.”

They bounced around the study area of the 50-mile-long Mae Ngao River in a 1999 Toyota Hilux 4X4 truck, through the various regions and communities, including teak forests and upland agricultural areas with rice paddies and soybean crops.

“When I initially started documenting the locations of reserves several years ago, I tried to find the locations of as many reserves within the basin as I could by exploring every road and trail on the map, and many that weren’t on any map,” he said. “For our fish surveys, we selected a set of 23 reserves distributed throughout the river basin that broadly represented all of the reserves. While there are probably 40 species within this river valley, in this study we regularly observed 33 species of fish.”

Intensive fisheries have reduced fish biodiversity and abundance in aquatic ecosystems worldwide. No-take reserves have become a cornerstone of marine ecosystem-based fisheries management. The team used the knowledge gained from decades of study on marine reserves to test if the same principles of success might apply to this network of riverine reserves, where one might not think reserves would work.

“The applicability of this marine reserve network paradigm to riverine biodiversity and inland fisheries remains largely untested,” Koning said. “Our research shows that freshwater reserves created by 23 separate communities in Thailand’s Salween basin have dramatically increased fish richness, density and biomass when compared to adjacent areas. One river reserve is 1,000 feet long and just 12 feet wide in dry season, but you can see fish everywhere.”

Underwater fish surveys were done using masks and snorkels with lots of crawling over and around rocks underwater. In many reserves, the abundance and size of fish seeking protection was evident by eye from the river bank in the dry season.

McIntyre, now Koning’s colleague in this research, was once his doctoral advisor at the University of Wisconsin, and co-advisor for his postdoctoral work at Cornell. McIntyre said he was shocked that the reserves worked so well.

“When you see piles of fish in each of these reserves, it is clear that something big is happening,” he said. “Questions remain about whether the fish populations are viable in the long run, and how durable the governance approach will prove, but this unique experiment in conservation still has much to teach us.”

“Our results demonstrate that small reserves have great benefits for intensively harvested fishes in this tropical river, even though their collective area encompasses only 2% of the channel in our study catchment,” Koning said. “The area of individual reserves ranged from just a half acre up to six acres.”

“One of the most important findings is that the network of reserves adds benefits beyond those arising from any single reserve,” McIntyre said. “Another key lesson is that communities have the power to protect the resource themselves, in a way that doesn’t prevent them from using it intensively outside of the reserve boundary.”

This study demonstrates that fish reserves can work well in subsistence fisheries targeting rivers, thereby offering a model for protecting fish biodiversity and offsetting overfishing in rivers worldwide. The study is especially timely given that overharvest of fisheries threatens thousands of species and the food security of hundreds of millions of people around the world.

“Freshwaters are under-represented among the world’s protected areas, and our findings suggest that networks of small, community-based reserves offer a generalizable model for protecting biodiversity and augmenting fisheries as the world’s rivers face unprecedented pressures,” Koning said.

In Southeast Asia, riverine reserves are commonplace; hundreds of communities have designated no-fishing zones that together form de facto reserve networks in rivers throughout the region.

The idea has the potential to be a big step forward in terms of freshwater biodiversity protection, not just in Thailand but worldwide. These results and the model could be applied in freshwater ecosystems worldwide – including highly diverse and highly threatened tropical rivers such as the Amazon, Congo and Mekong Rivers.

McIntyre echoed Koning’s take on the potential for worldwide implementation.

“Aaron’s findings offer a great model for other parts of the world, “he said. “The role of cultural traditions and governance structure can’t be overstated, so we do not expect simplistic transferability. However, many of the principles identified could be applicable to subsistence fisheries elsewhere.”

Koning is currently a postdoctoral researcher working with Zeb Hogan and based at the University of Nevada, Reno’s Global Water Center in the College of Science.

Koning and Hogan, an aquatic conservation ecologist, along with Sudeep Chandra, the Director of the Global Water Center at the University of Nevada, Reno will be replicating the Thailand study on Cambodian rivers as part of their Wonders of the Mekong project, a comprehensive approach to fish conservation, economics and cultural values.

The Wonders of the Mekong Project, a partnership with the Inland Fisheries Research and Development Institute of Cambodia with funding from U.S. Agency for International Development, is led by Hogan. They conduct applied research, working to build capacity and develop outreach and communications products to highlight the economic, ecological, and cultural values of biodiversity and ecosystem services associated with the Lower Mekong River. The Wonders project will be building on the findings of this Mae Ngao River study.

Fewer butterflies seen across the warming, drying landscapes of American...