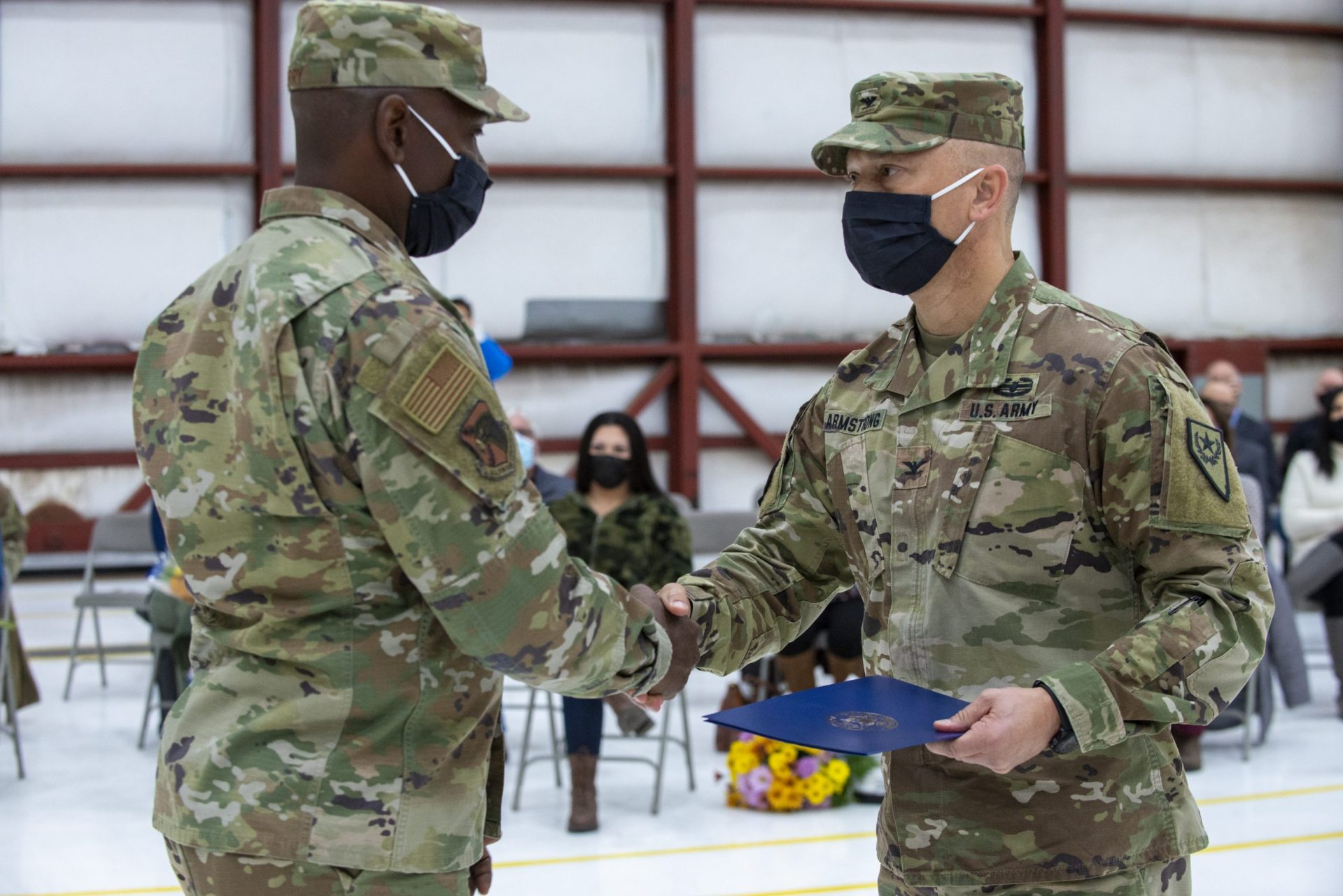 Col. Troy Armstrong of Las Vegas became the land component commander of the state’s National Guard soldiers on Sunday and Col. Clayton Chappell of Minden assumed command Saturday of the largest brigade in the Nevada Guard, the 17th Sustainment Brigade.

In a ceremony Sunday presided over by Adjutant General Maj. Gen. Ondra Berry at the Army Aviation Support Facility in Reno, Armstrong began his role in the organization as the land component commander. Armstrong will oversee the more than 3,200 soldiers in the Nevada Army Guard. He is set to attain the rank of brigadier general and will be one of only two general officers in the Nevada Army Guard along with assistant Adjutant General Brig. Gen. Michael Hanifan.

“It’s my sincere honor to be standing before you as the incoming commander of the Nevada Army Guard,” Armstrong said to the socially-distanced attendees inside the aviation hangar. “I assure you I will do everything within my abilities to provide direction and purpose in a manner that’s professional, inclusive and transparent.

“Most important, we’ll work as a team to support the needs of our state and defend our nation against all threats as the finest National Guard force in our state’s history. I’m honored to be your commander and proud and honored to be a soldier in the Nevada Army Guard. I look forward to working with everyone, expanding opportunities, creating transparencies, and leading with nothing less than absolute honor.”

Chappell succeeds Armstrong as the commander of the 17th Sustainment Brigade. The Las Vegas-based brigade maintains administrative control over two-thirds of the Nevada Army Guard’s units and personnel. Chappell deployed with the 17th to Kuwait in 2016 as the brigade support operations officer before a stint with the Army Reserve’s 364th Expeditionary Sustainment Command in Marysville, Washington.

Armstrong had been the commander of the 17th Sustainment Brigade since 2018. In his civilian occupation, Armstrong is the manager of administrative services for the Clark County Department of Family Services. He has been employed by Clark County for more than 27 years.

Armstrong is a homegrown officer who graduated from the Nevada Army Guard’s Officer Candidate School in 1996. In subsequent years, he served on some of the most visible deployments in Nevada Army Guard history including two deployments to Iraq with the 72nd Military Police Co. He was also the commander of the 72nd when it deployed to Louisiana in 2005 in the wake of Hurricane Katrina.

In 2008, Armstrong returned to Iraq with the 140th Military Police Brigade Liaison Detachment. In 2015, he assumed command of the 17th Special Troops Battalion and deployed with the unit in 2016 to Southwest Asia in support of Operation Spartan Shield.

Doser also has longtime ties to Nevada. A 1982 graduate of Reed High in Sparks, Doser began his Army career in 1986 and earned his commission through the University of Nevada, Reno’s, ROTC program. After more than a dozen years of active-duty service, he joined the Nevada Army Guard in 1999. Some of his previous positions included: 421st Regiment commander (2005-2007); 17th Sustainment Brigade commander (2011-2014) and director of the Joint Staff (2015-2017).

Berry spoke glowingly about Doser’s work during his three years as the land component commander, especially during this past year as Doser was concurrently responsible for the activation of more than 900 Soldiers to support the state’s coronavirus health response and the deployment of five Nevada Army Guard units to three continents.

“General Doser changed the culture of the Nevada Army Guard. Your legacy is set. Rest easy,” Berry said during his speech to the audience that included Congressman Mark Amodei and Reno Police Department Chief Jason Soto. “We are better because of who you were and your leadership. You did all that we asked you to do. Thank you, thank you, thank you.”

For his meritorious service, Doser was awarded the Maj. Gen. Drennan Clark Order of Nevada. The award is the second highest state military award possible behind only the Medal of Valor. The award is reserved for individuals who have recorded a minimum of 25 years of extraordinary service in the U.S. military including at least 20 in the Nevada National Guard.