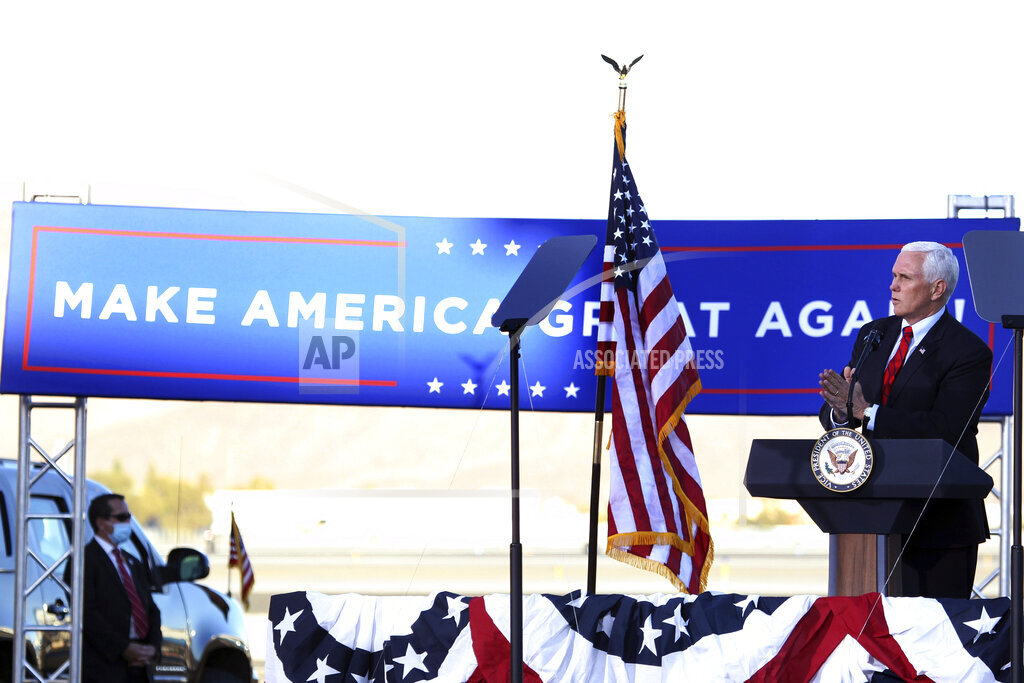 RENO, Nev. (AP) — Vice President Mike Pence urged early in-person voting and highlighted reports of a partial economic recovery during a rally Thursday in Reno, hoping to drum up enthusiasm in Nevada in the final days before the election.

“The great American comeback is on,” Pence said, noting reports released by the Department of Commerce earlier in the day showing the national economy grew 33% from July to September — a partial recovery after the downturn earlier in the year.

With Air Force Two and rolling hills as a backdrop, Pence contrasted President Donald Trump’s vision for the United States with former Vice President Joe Biden’s. Pence did not mention the coronavirus outbreak that swept his office earlier in the week or the mail-in ballots that have been sent to every active voter in Nevada.

“The choice in this election is whether America remains America,” he told an audience of about 250 supporters, the vast majority of whom wore masks and sat in chairs arranged 6 feet apart.

Both presidential campaigns have blitzed Nevada in the final run to Election Day, albeit in contrasting fashions. After losing the state by 2.4 percentage points in 2016, the Trump campaign has targeted it as a pick-up opportunity. Trump has spoken at three rallies in the state, all held in defiance of statewide guidelines limiting large public gatherings, while Pence has spoken at two.

The vice president acknowledged that coronavirus cases were on the rise in the West and throughout the country, but said the White House had no intention to mandate business closures. A Biden victory, he said, would likely lead to business, schools and places of worship closing, as is happening in European countries. Additional closures could hamper the economic recovery being made possible by businesses reopening, he warned.

“It’s a choice between a Trump boom and a Biden depression,” Pence said of the election.

Republicans hope the argument resonates in Nevada, which is among the states with economies hardest hit by the pandemic and business closures. The pandemic propelled Nevada’s tourism-centric economy into a tailspin. In April, unemployment shot up to a nation-topping 28.2%.

Almost half of Nevada’s active voters have already cast ballots, either in-person at early voting sites or using mail-in ballots. As of Thursday, more registered Democrats had voted than registered Republicans. But Republicans have historically turned out at higher rates than Democrats on Election Day.

Speaking before Pence, U.S. Rep. Mark Amodei, a Carson City Republican, referred to the final push toward Election Day in Nevada as “no-holds-barred jungle wrestling.” A Republican victory is within reach, he said, as long as the party’s voters turn out.

“Where we’re sitting right now, it’s not a bad spot. But there’s some finishing up to do,” he said.

Pence has campaigned throughout the week despite reports of a coronavirus outbreak in his office. After being exposed to infected staff members, including his chief of staff Marc Short, Pence tested negative for COVID-19. The White House subsequently approved Pence’s swing-state tour, claiming guidelines on the activities of essential workers allowed the vice president to exempt himself from quarantine and continue campaigning.

His decision to continue campaigning has brought pushback from the Committee to Protect Medicare, a political action committee that opposes President Trump’s reelection bid.

In a letter signed by more than 250 doctors, including five from Nevada, the group criticized Pence for holding rallies in defiance of guidelines that would have him quarantine and in spite of evidence showing large political rallies of mostly mask-less individuals have been linked to the spread of the virus.

Dr. Nita Schwartz, an emergency physician from Genoa, Nevada, said she worried about the rally exacerbating the surge in new cases.

“Repeating a reckless, risky event like a packed campaign rally is just asking for trouble. When the vice resident goes back to Washington … my colleagues and I will have to put on our N95 masks and deal with the consequences of his super-spreader event,” Schwartz said.

The Trump campaign did not respond to a request for comment regarding the letter.

AP writer Scott Sonner contributed. Metz is a corps member for the Associated Press/Report for America Statehouse News Initiative. Report for America is a nonprofit national service program that places journalists in local newsrooms to report on undercovered issues.