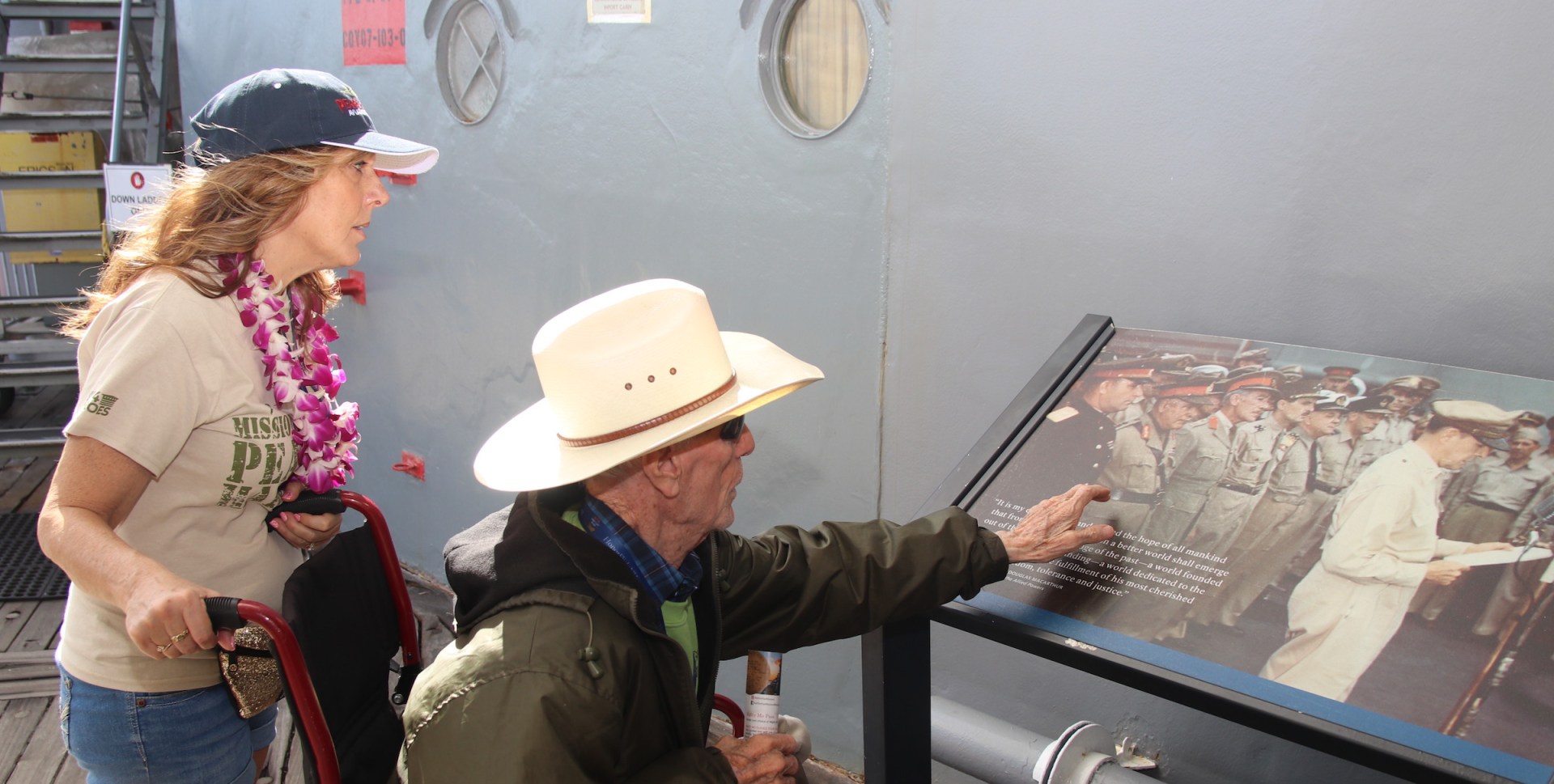 Lori Williams Schierholt and Ed Tremper of Dayton look at a photo taken during the Instrument of Surrender aboard the USS Missouri on Sept. 2, 1945. Steve Ranson / NNG
Share
0
FacebookTwitterPinterestLinkedinTumblrRedditWhatsappTelegramEmail

FALLON — On Sept. 2, 1945, shortly after 9 a.m. in Tokyo Bay aboard the battleship USS Missouri, representatives from both Japan and the United States signed the Instrument of Surrender to end World War II in the Pacific Theater, almost four months after Germany surrendered on May 8.

On the 75th anniversary of this treaty, war officially ended on a late Saturday afternoon on the West Coast because of the time difference with Tokyo. People crowded around their radios to learn of the surrender on V-J (Victory Japan) Day, and special editions of newspapers rolled off the presses blaring “Victory” or Surrender.” In both major cities and smaller communities from the Atlantic to the Pacific oceans, people hugged each other and danced in the streets to celebrate a war that killed more than 400,000 American servicemen and women.

Every state lost many of their sons and daughters in Europe and the Pacific, and hundreds more died in training accidents back in the United States.

“On that day in 1945, WWII came to an end aboard the USS Missouri moored in Tokyo Bay,” said Vietnam veteran and Carson City Mayor Robert Crowell. “On the forecastle flew the United States flag that flew over our nation’s capital at the start of the War. Also flown was the personal flag of Admiral William “Bull” Halsey as the Missouri served as his flagship.  And little known, the 31-star national flag flown by Commodore (Matthew) Perry with the opening of Japan in 1853 was flown from the United States Naval Academy to the Missouri.

Fallon Mayor Ken Tedford only learned about his father’s service when he was a youngster growing up in Churchill County. Tedford reflected on both the surrender aboard the USS Missouri and his late father, an Army major who served for four years. When the young Army officer returned home to the green alfalfa fields of Churchill County, Tedford said his father didn’t talk much about the war to anyone. He began to build a business and have a family.

“I can never express my gratitude enough for that generation who fought in that war,” Tedford said.

Fallon lost 36 men during the war, 20 from the Army and Army Air Force and the remainder from the Navy, Marine Corps and Coast Guard. During the early to mid-1940s, Tedford said Churchill County sent hundreds, if not more than a thousand residents off to war. At the time, Churchill County was the fifth most populous county in the state with 5,317 residents … behind Washoe, Clark, Elko and White Pine. Fallon, the county seat, claimed 2,400 people within its city limits.

“We had such a great sacrifice in a small community. I was told by Rollan (Rollan Melton, prominent Nevada newspaperman and Churchill County High School graduate) a high percentage of men came from our community. I can’t say enough for the sacrifice of the men and women who died.”

As a baby boomer born to parents who represent the “Greatest Generation,” Americans who lived through the Great Depression and war, Tedford said he’s very proud of the ideals learned from his mother and father.

“They taught us the values of character, respect and discipline,” he pointed out.

Churchill County felt the loss of human life early in the war, a fact noted by Tedford. Of the 1,177 sailors and Marines killed aboard the USS Arizona on Dec. 7, 1941, when Japanese planes attacked Pearl Harbor, Hawaii, three hailed from Nevada including Richard Walter Weaver of Fallon. The government never recovered their bodies.

The 18-year-old Weaver, who was born in in Fallon, joined the Navy on Nov. 27, 1940, and performed the duties of standing watch and serving as a gunner while on the USS Arizona. His parents were Ray Rhese and “Marge” Lois (McCuistion) Weaver. According to accounts, Ray Weaver, a veteran of World War I, gave his son permission to enlist. Only years later, though, did Weaver’s father learn his son had been kicked out of school for arguing with his teacher.

As with Pearl Harbor and Sept. 11, 2001, Churchill County Museum Director Dan Ingram said the surrender to end World War II was one of those days people remembered where they were. As time marches on with many people dying from this era, Ingram said we must make an effort to remember events such as this and Fallon’s relationship to key events.

Nevada’s only Medal of Honor recipient, Cmdr. Bruce Van Voorhis, a Churchill County and U.S. Naval Academy graduate, was shot down near the Solomon Islands in 1943, a year after his brother, Wayne, died in a Japanese prisoner of war camp in the Philippines. The Nevada aviator and his brother are also remembered at the Battle Born Memorial in Carson City and the Gold Star Family Memorial in Sparks, both dedicated to the state’s men and women who died in service of their country.

The legend of Cmdr. Bruce Van Voorhis still etches into the history of the Lahontan Valley and with the current mission of the Naval Aviation Warfighting Development Center at NAS Fallon. Rear Adm. Richard Brophy, who assumed command of NAWDC in 2019, said Van Voorhis represents the giants of naval aviation and what they endured.

“I talk about that story of Van Voorhis,” Brophy pointed out. “It’s very inspirational. He was clearly on a one-way mission, and he was critical to our mission to win the Pacific.”

Locally, Churchill County Museum arranged a reflective exhibit on Van Voorhis and his contributions to naval aviation. Naval Air Station Fallon’s airfield was dedicated in his name on Nov. 1, 1959, and at that time, the 14,000-foot runway was one of the longest in the world but still remains the longest in the Navy.

“What we would like to do is broaden that exhibit with the rest of that generation,” Ingram said, adding the museum may expand the exhibit of NAS Fallon, which grew out of the war effort.

Brophy lauded the “Greatest Generation” for their fighting and sacrifice by creating a world order many people have enjoyed for more than 70 years.

“They were innovative, self-sacrificing and eagerly accepted the challenges that they faced,” he said. “We are all humbled to stand on the shoulders of the giants of this generation, and we aspire every day to honor their legacy.”

The Civil Aviation Administration and the Army Air Corps established fields around the state including Fallon and Las Vegas, which later became Nellis Air Force Base. Other air fields sprung up at Reno, Tonopah and Indians Springs. The Navy, however, chose Fallon as a preferred training site, and in 1943, the Navy assumed control of the two 5,200 foot runways. According to the history of NAS Fallon, “Construction soon began on barracks, hangars, air traffic control facilities and target ranges. On June 10, 1944, Naval Auxiliary Air Station Fallon was commissioned.”

The Las Vegas Army Airfield rapidly grew in importance with B-17 Flying Fortresses arriving in 1942. Every five weeks, 600 gunnery students and 215 co-pilots trained every five weeks.

Tedford also acknowledges the importance of the state’s installations, and communities, especially Fallon’s.

“Fallon is a great military town,” Tedford said. “We support our veterans from every war, every conflict.”

In addition to the military expansion, mining increased its production during the war years, and the cities near the deposits began to grow such as Ely and Ruth in eastern Nevada.

From its humble beginnings more than 75 years ago to its present-day significance, the Navy has improved its training in Fallon to meet the challenges of the 21st century.

“The lessons learned in the crucible of combat during WWII are directly reflected in how the Navy is currently trained and organized for combat,” Brophy said. “The Navy’s primary force element is the carrier strike group (CSG), developed and refined in WWII and only modified to account for technological advances since then.

Brophy said the carrier air wing with more than 70 aircraft and 1,700 aviators/maintainers on the aircraft carrier remains the striking power for all carriers. He said today’s aviator would feel completely at home on a Battle Group as they were called during WWII.

“One of the Naval Aviation Warfighting Development Center’s primary missions is training carrier air wings,” Brophy pointed out.  “This level of training was ad hoc during WWII but is now formalized and remains the pinnacle of training evolutions for all carrier air wings and occurs at Fallon.”

Brophy said the training ensures an effective and lethal naval aviation force can prevail in the high-end fight against a peer adversary.

During WWII, Brophy said one of the pioneers in tactical development was Lt. Cmdr. John S. Thach, who created the “Thach Weave.” He designed a tactic to defeat the superior Japanese Zero fighter aircraft. According to Brophy, the platforms may have changed over the years but one constant — the Navy’s greatest combat advantage — still includes its aviators and aircrew.

“NAWDC’s entire syllabus is designed around training our people, and it’s the heart of our mission,” Brophy said. “The other focus that comes from WWII is that tactics are never static. Rather, they are constantly evolving to account for technology improvements and enemy capabilities. The aviators and aircrew at NAWDC are highly innovative and are developing the tactics, techniques and procedures to fight and win tomorrow’s conflicts.”

Brophy said NAWDC is naming its newest facility after Thach to recognize his contribution during the second world war and to continue the enduring legacy of the “Greatest Generation.”

“Looking back and remembering events like the 75th anniversary of V-J Day help us take note of how we got here,” Berry said. “ It also reminds us of the fragility of our freedoms and great democracy which we’ve fought at great cost to uphold and must continue to fight to keep.  We must never forget this important time in our history and the reminder that we as Americans stand on the shoulder of those great warriors.”

This year is the 75th anniversary of the end of World War II, and the Nevada News Group has featured numerous articles since January on the events or on the men and women who served stateside or overseas.