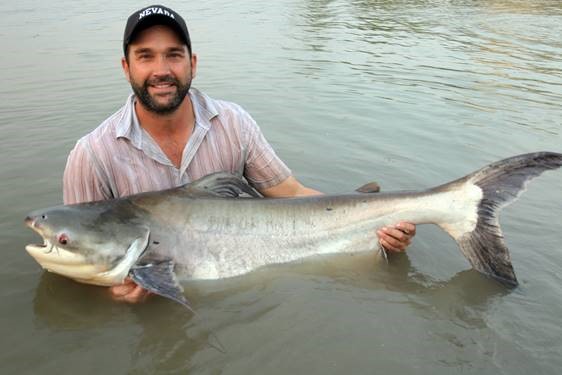 Fish biologist Zeb Hogan holds a giant Pangasius catfish in Thailand. It can grow to become one of the largest freshwater fish in the world, migrating up the Mekong each May to spawn. The giant Pangasius is Critically Endangered, facing threats from overfishing and hydropower development.
Share
0
FacebookTwitterPinterestLinkedinTumblrRedditWhatsappTelegramEmail

RENO — With hydropower, overfishing, climate change and pollution on the rise, monitored populations of migratory freshwater fish species have plummeted by 76% on average since 1970, according to the first comprehensive global report on the status of freshwater migratory fish, issued this week by the World Fish Migration Foundation and Zoological Society of London.

The report states that migratory fish, such as salmon, trout and Amazonian catfish, are vital to meet the food security needs, as well as support the livelihoods of millions of people around the world. They also play a critical role in keeping our rivers, lakes and wetlands healthy by supporting a complex food web. Now, their populations are under immense threat from human-made impacts and require urgent action to halt and then reverse the alarming decline.

“Migratory fish provide food and livelihoods for millions of people but this is seldom factored into development decisions,” Stuart Orr, WWF Global Freshwater Lead, said. “Instead, their importance to economies and ecosystems continues to be overlooked and undervalued – and their populations continue to collapse “The world needs to implement an Emergency Recovery Plan that will reverse the loss of migratory fish and all freshwater biodiversity – for the benefit of people and nature.”

Migratory fish are invaluable to human health and the global economy. Fish and fish-byproducts represent one of the world’s most traded products within the food sector. The recreational fishing industry alone is worth billions of dollars and tens of thousands of jobs. Overall, the figures represent the need for more protective measures for migratory and freshwater fish worldwide.

“Catastrophic losses in migratory fish populations show we cannot continue destroying our rivers,” Arjan Berkhuysen, Managing Director of the World Fish Migration Foundation said. “This will have immense consequences for people and nature across the globe. We can and need to act now before these keystone species are lost for good.”

Migratory fish in Asia have been on a catastrophic decline as well, according to study co-author Zeb Hogan. He leads the USAID-funded research project Wonders of the Mekong that is studying the Mekong River system to help governments maintain a balance of economic vitality and food production. He’s been studying migratory freshwater megafish on six continents for 25 years, is a United Nations Convention on Migratory Species Councilor for Fish and an Ambassador for World Fish Migration Day.

“This report does not include fish from the Mekong River because time series data was not available yet, but the decline has been catastrophic,” Hogan, a fish biologist in the College of Science at the University of Nevada, Reno, said. “However, Teresa Campbell an ecologist with the University’s Wonders of the Mekong project, recently published a study on the conservation status of several migratory Mekong fish and the results of her study support the findings of this global report.”

Published last month in the journal Water, the study showed that several of the giant species of migratory fish in the Mekong have almost disappeared. For example, the Mekong giant catfish is on the brink of extinction in the wild. The authors conclude that species conservation strategies should be developed and must address pervasive illegal fishing activities, alongside habitat degradation and blocked migrations, to recover declining populations

The Mekong River runs through six Southeast Asian countries and is home to some of the world’s largest freshwater fish species, which are highly migratory and extremely vulnerable to dams and overfishing. Wonders of the Mekong scientists are studying the river system to help governments maintain a balance of economic viability and food production. To put that threat in context, an estimated 40 to 70% of food fish in the Mekong are migratory and more than 60 million people depend on the Mekong River for their livelihoods and food security.

Habitat degradation, alteration, and loss account for approximately half of the threats to migratory fish. Wetlands are essential habitats for migratory fish species, but, globally, wetlands are disappearing three times faster than forests, while dams and other river barriers block fish from reaching their mating or feeding grounds and disrupt their life cycles.

“Rivers and migrations are the connective tissue of our planet – and migratory fish are bellwethers for not just rivers, but for the countless other systems they connect, from the deep sea to coastal forests,” said Jeffrey Parrish, Global Managing Director for Protect Oceans, Land and Water at The Nature Conservancy. “Losing these fish means losing so much more. By factoring in these species and systems into sustainable energy and food production, and by investing in their protection and restoration, we can bring them back.”

While Nevada is known for its abundance of desert terrain, Nevada was once home to chinook salmon, the largest of the Pacific salmon species. They migrated up the Columbia River to the Snake River and then into northeastern Nevada in the Owyhee, Bruneau and Jarbidge rivers and Salmon Falls Creek – all major tributaries of the Snake River.

“More than 9,000 miles of river and streams in the Columbia River watershed are now inaccessible to migratory fish because of dams,” Hogan said. “These are fish that were once crucial to the survival and livelihoods of people living along the Columbia River.”

For centuries, the tens of thousands of Pacific salmon swam hundreds of miles up the rivers and tributaries to spawn.

Native Americans caught and ate the Columbia Basin chinook along the Jarbidge River in Nevada more than 2,500 years ago. People migrated to northeastern Nevada to ranch and mine in the 1800s and salmon were a key part of the fish and game trade that supported the region’s communities.

Salmon migrating from the Columbia Basin vanished from Nevada after the U.S. Bureau of Reclamation closed the gates on Owyhee Dam in December 1932. Three massive Hells Canyon dams were added to the Snake River between 1958 and 1967 further sealing the fate of the salmon in Nevada.

Elsewhere in northern Nevada, the iconic migratory and now endangered Lahontan Cutthroat Trout, which can grow to 60 pounds, faced large declines due to development and human impact.

Lahontan Cutthroat Trout once made epic mass migrations, turning the Truckee River red from Pyramid Lake to Lake Tahoe. They can no longer migrate, and several northern Nevada Native American Tribes, working with federal and state agencies, have been working to build the Lahontan Cutthroat Trout population throughout the watershed.

For example, the Pyramid Lake Paiute Tribe, the Bureau of Reclamation and the U.S. Fish and Wildlife Service broke ground last year to begin installing an 80-foot-wide by 390-foot-long horizontal fish screen at the 110-year-old Derby Dam on the Truckee River. The 23.3 million project, the nation’s largest horizontal fish screen, will restore watershed connectivity and promote recovery of the trout.

Hogan said there are several actions people in Nevada and across the country can take to protect migratory fish, and freshwaters more generally: