Home Featured Sailor fibbed about his age at enlistment
FeaturedHistoryPeople 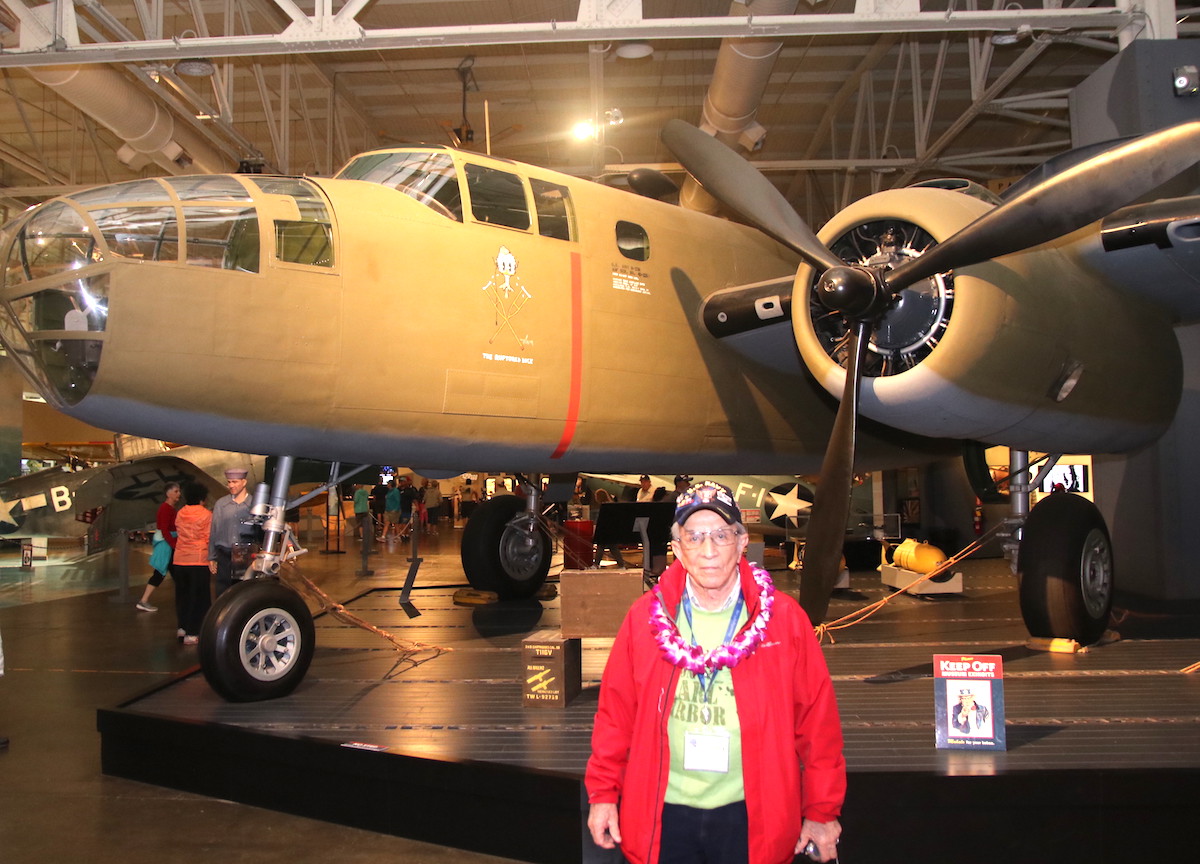 Standing in front of a B-25 bomber at the Pearl Harbor Aviation Museum is Gilbert Sanchez. Image: Steve Ranson / NNG
Share
0
FacebookTwitterPinterestLinkedinTumblrRedditWhatsappTelegramEmail

PEARL HARBOR, Hawaii — A trail of death and destruction swallowed the western Pacific Theater during the final year of World War II as the allies continued their march toward the Japanese mainland and the Philippines.

While the Americans troops island hopped southeast of Japan, another U.S. wave aimed its sights on retaking the Philippines by capturing Peleliu in mid-September 1944 and then working their way to Leyte and finally to Luzon, home to the capital of Manilla.

As a young teenager during the latter part of World War II, Gilbert Sanchez had a front-row seat to the intense fighting and of the troops storming the beach. Sanchez, perhaps one of the youngest sailors on the assaults, had persuaded his father to allow him to enlist in the Navy when he was 15 years old.

“I lied to get into the Navy,” said Sanchez, who lives in Reno. “I had been working on the Northern Nevada Railroad, (a disbanded line that began at the copper mines at Ruth in extreme eastern Nevada and wound its way to the main railroad line east of Wells.) It was so damn cold I can’t do this.”

“I went to Ely and asked my father for permission (to enlist),” Sanchez said. “I was born in 1928 but with ink eradication, I carefully put a 6 in there and went to Salt Lake City to join the Navy.”

In no time, Sanchez boarded a train to warm and sunny San Diego where he began his boot camp. Afterward, Sanchez realized he would be in much warmer, humid weather once he left southern California.

“The Navy’s plan was to send most of the guys overseas,” Sanchez recalled.

After several months in the South Pacific, Sanchez and his fellow sailors received their first set of orders for assignment to the USS Jupiter AK43, an Aldebaran-class cargo ship that delivered goods and equipment to the war zone and the amphibious forces. Their first stop was Peleliu, a beginning step to fulfill Gen. Douglas MacArthur’s vision of returning to the Philippines and driving the Japanese out.

“Our crew consisted of the coxswain, the motor mac and the deckhand, which was me,” Sanchez said. “My job was to lower the ramp and raise it once the troops were ashore.”

Sanchez said the crew ferried about 30 men on each trip.

“We made numerous trips,” Sanchez added.

First, a number of battleships, cruisers and three aircraft carriers softened the island with a pre-assault barrage of bombardments.  On Sept. 15, the Navy’s bombardment continued along with planes strafing and bombing Peleliu. Within a three-hour span, the landing crafts plowed through the choppy water, dropping off about 6,000 Marines who stormed the shore in a morning marked by a high number of casualties.

“I would lower the ramp when we hit the beach, and raise the ramp. We had a .50-caliber machine gun on the back of the boat,” Sanchez, a seaman second class, pointed out. “There were more ships doing the same thing, and after all the troops were ashore, we took in supplies.”

The Japanese fought their battles in the hills, but Sanchez said any enemy shelling toward the shore came in high. The crews, though, stayed in their landing boats until the USS Jupiter was ready to depart, which was within the 7-to-10-day span.

The U.S. armada of battleships, cruisers and aircraft carriers sailed west in preparation for an assault on Leyte, one of the Philippines’ largest islands on the eastern side of the country.

Shelling from Navy ships pounded targets on Leyte, preparing the island for a massive assault conducted by the Sixth U.S. Army. On Oct. 20, MacArthur waded onto Leyte’s shore and, on a radio broadcast, delivered his prophesy: “People of the Philippines, I have returned.”

Near the end of December, the United States’ conquest of Leyte became a decisive victory in slowly recapturing the Philippines from a Japanese force that saw its number dwindle to a quarter million soldiers.

On the first day of fighting on Luzon, Sanchez and the other landing boat crews braved the heavy surf in Lingayen Gulf to drop off the troops. Up and down the beach were men and stacks of supplies needed for the final push to recapturing Manilla.

After the war, time ran out on Sanchez’s enlistment: the Navy discovered Sanchez’s age and gave him an honorable discharge. He then joined the U.S. Coast Guard and was assigned to the USCGC Chautauqua, an Owasco class high endurance cutter that was commissioned on Aug. 1, 1945.

“There I was on a Coast Guard cutter going on weather patrols,” Sanchez said.

He served on the ship for a year before his assignment to the Carquinez Strait Light House west of Vallejo which he manned for two years before his honorable discharge from the Coast Guard.

Upon completion of his three-year tour, Sanchez’s brother told him he could get a job with a contractor in Reno and become an apprentice carpenter.

Sanchez, now in his early 90s, had a successful career, building apartments and office buildings including one for the IBM Corporation on First and Washington streets west of the downtown area; yet, he loves to brag about his nautical collection that’s housed in his basement. His memorabilia includes models and apparatus from naval ships.

In looking back at his enlistment as a teenager, Sanchez said he has no regrets in fibbing about his age to serve during World War II. “It was one of the best things I ever did in my entire life,” he said.

Gilbert Sanchez was one of 16 million U.S. men and women who served during World War II. Earlier this year World War II and Korean War veterans visited Pearl Harbor as part of Honor Flight Nevada’s first trip to Hawaii. The end of World War II in both Europe and the Pacific occurred 75 years ago, and the Instrument of Surrender between the U.S. and Japan was signed on Sept. 2, 1945.