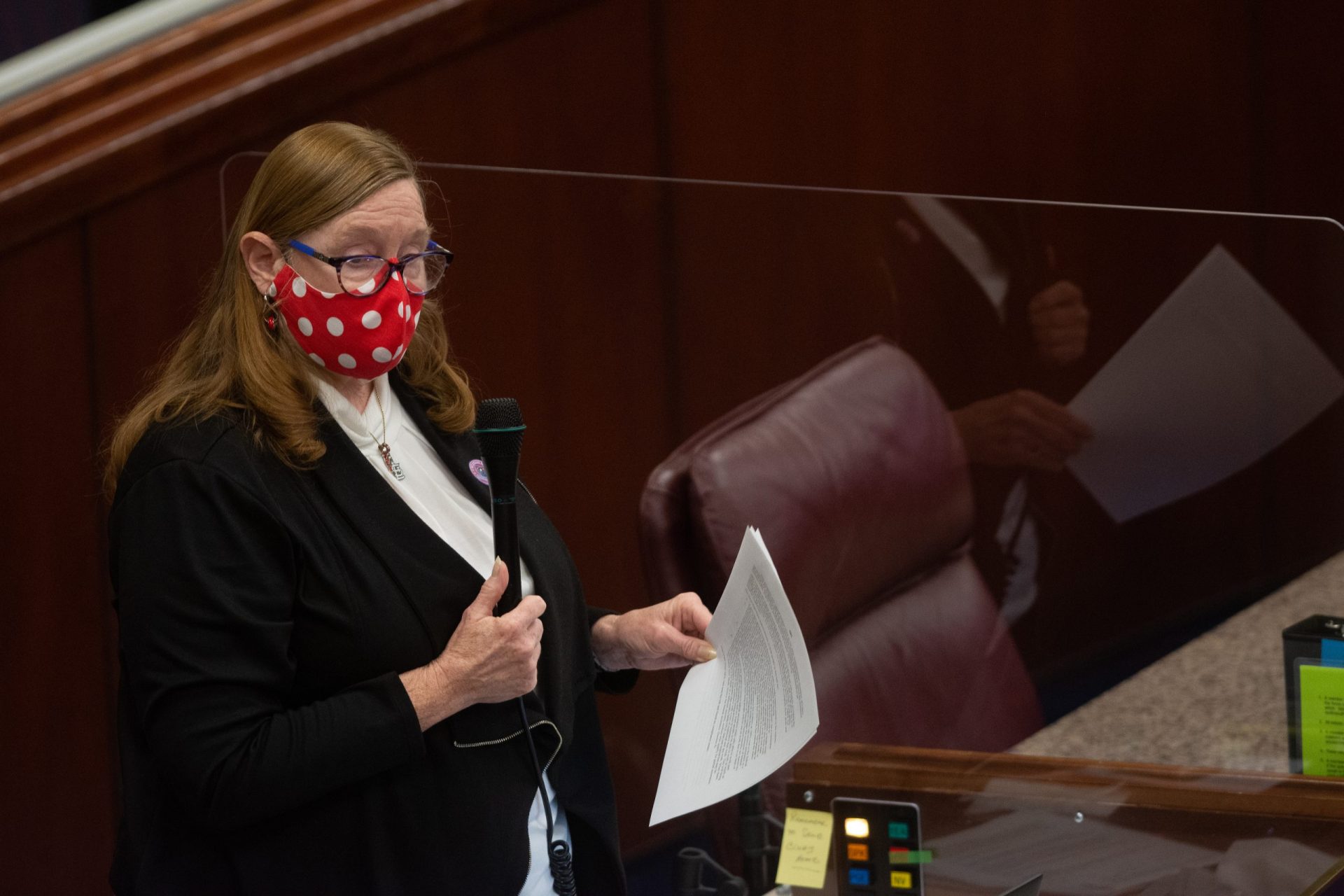 Assemblywoman Maggie Carlton on Tuesday, Aug. 4, 2020 during the fifth day of the 32nd Special Session of the Legislature in Carson City. (Pool Photo by David Calvert/Nevada Independent)
Share
0
FacebookTwitterPinterestLinkedinTumblrRedditWhatsappTelegramEmail

CARSON CITY, Nev. (AP) — Nevada lawmakers passed a bill on Wednesday to expand eligibility for unemployment benefits to workers who decide returning to their jobs amid the coronavirus pandemic is too risky.

“What this intends to do is to allow people to not have to choose between their jobs and their lives,” said Francisco Morales, who presented the bill on behalf of Gov. Steve Sisolak’s office.

Throughout the Legislature’s special session, both Republicans and Democrats have said fixing Nevada’s problem-ridden unemployment insurance system is a top priority.

After years of growth, the pandemic propelled Nevada’s economy into a tailspin. With businesses closed and visitor volume down in Las Vegas, unemployment shot up to a nation-topping 28.2% in April. The unemployment rate fell to 15% in June.

Balky technology, jammed phone lines and confusion over eligibility have hamstrung the Department of Employment, Training and Rehabilitation in its efforts to distribute benefits to unemployed Nevada residents. Unfulfilled claims and an interminable backlog have sparked outrage and left Nevada residents struggling to make ends meet without benefits they’re entitled to.

The 19-page bill was made public moments before it was first heard in the state Senate late on Sunday night, denying lawmakers time to review it before asking questions.

Most questions from Republican lawmakers revolved around fraud concerns, while Democrats focused primarily on how to expedite payouts on claims that have faced long delays.

As of July 25, almost 600,000 laid off workers had filed for unemployment in Nevada since the onset of the pandemic, however administrators admit that anywhere from hundreds to hundreds of thousands could be fraudulent. The state has paid a total of $6.2 billion in unemployment insurance and the federal government’s $600 pandemic supplement.

Administrators say the unemployment trust fund could be depleted as soon as September, forcing the state to borrow to continue to fulfill claims.

It adapts rules that make people who deny offers to return to work without “good cause” ineligible for unemployment benefits. The bill redefines “good cause” to include COVID-19 and, by doing so, allows immunocompromised individuals, parents without day care or people who live with high-risk family members to remain eligible for unemployment if they don’t return to work.

Assemblywoman Maggie Carlton, D-Las Vegas, said allowing people to work part-time without forfeiting their eligibility was a key component of the bill for workers in a city like Las Vegas, where less tourists mean less hours for workers.

“We are not going to be going back to work full time. We know it’s going to be awhile, and we cannot allow people to be penalized. They want to go to work, they would love to work, but those hours aren’t going to be there for them,” Carlton said.