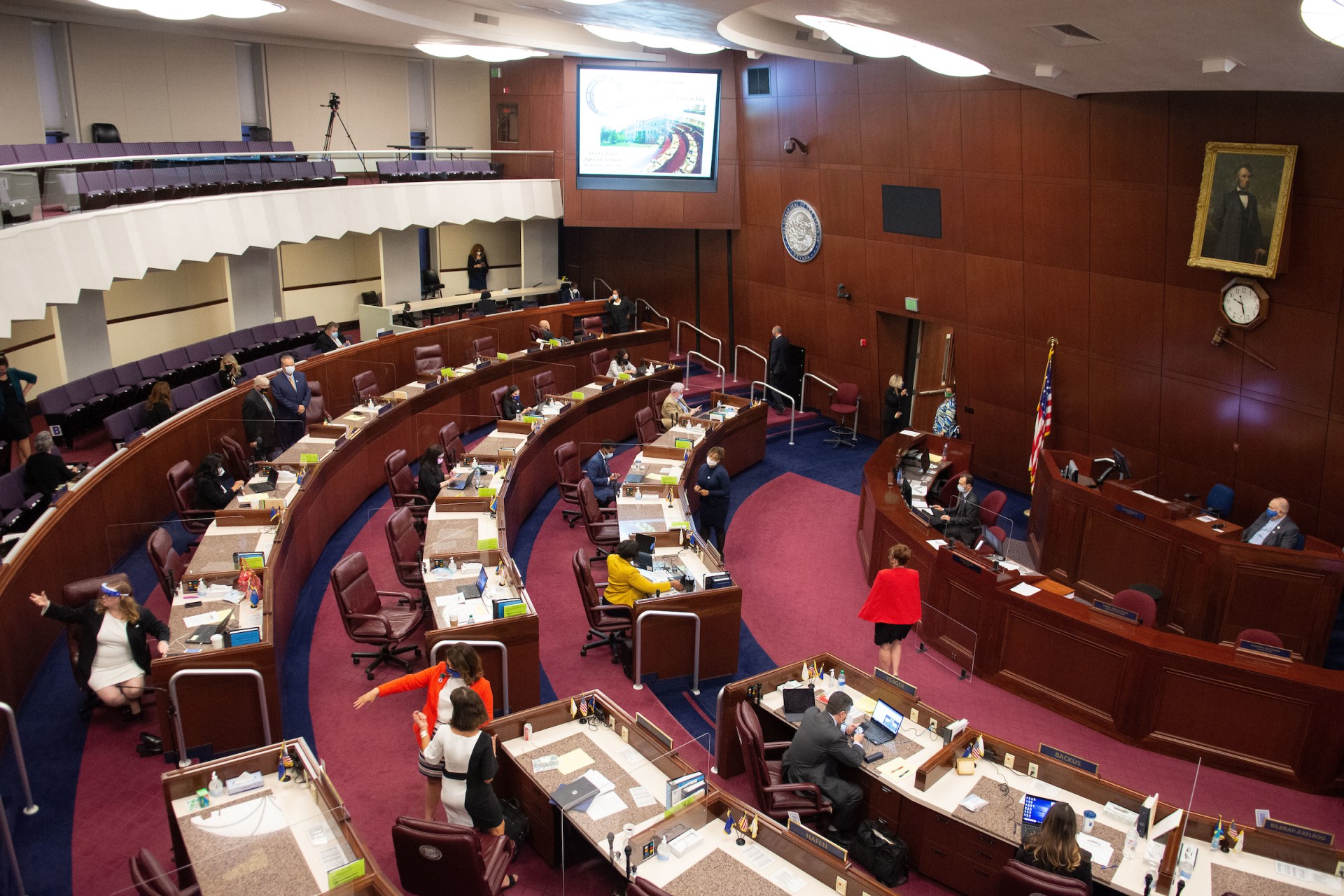 The Nevada Assembly Chambers before the start of the first day of the 31st Special Session of the Nevada Legislature in Carson City, Nev., on Wednesday, July 8, 2020. (David Calvert/The Nevada Independent)
Share
0
FacebookTwitterPinterestLinkedinTumblrRedditWhatsappTelegramEmail

CARSON CITY, Nev. (AP) — A Nevada judge decided Thursday not to require the state unemployment office to pay out benefits en masse to laid-off workers whose claims have been erroneously delayed or denied.

District Court Judge Barry Breslow in Reno limited the scope of a July court order that required the state pay out denied or delayed claims to certain categories of workers. Breslow ruled that, although many applicants have yet to be paid, the state had made progress and not violated the court’s earlier order.

The earlier order directed the state to pay out benefits to gig and independent workers who lost their jobs or had their wages cut.

Skyrocketing unemployment put an unprecedented burden on Nevada’s unemployment office, which has struggled to process hundreds of thousands of claims filed since the onset of the pandemic.

The system has been plagued by computer glitches and phone-hotline delays. Moreover, the requirement that some laid-off workers file separately for traditional unemployment insurance and supplemental pandemic benefits has confused both administrators and applicants.

“There should be a ‘one stop shop’ for administering unemployment benefits in Nevada. The most efficient way to resolve the UI/PUA is to administer these benefits through the same program, process, and people,” he wrote in the report. “Requiring people to go from one program and process to another creates an unnecessary additional layer of administration that is redundant, time consuming, and frustrating for applicants.”

Based on his findings, Guinasso concluded the state unemployment office’s changes were in line with Breslow’s court order, despite the fact that it has not resolved problems suspected of preventing thousands of workers from receiving benefits.

The state argued against paying out applicants en masse and that the fraud attempts that have delayed pay-outs throughout the United States during the pandemic have created unavoidable delays.

“Accelerating the eligibility determination means making a determination with less information which will increase the likelihood that incorrect determinations are made,” attorney Greg Ott wrote in response to the report.

But plaintiff’s attorney Mark Thierman said hundreds of thousands were still not being paid, despite Breslow’s earlier order. He accused the state of fostering hysteria without providing evidence of widespread fraud.

“The ‘flags’ of fraud are ridiculous. Fear of fraud, sabotage, outside influences are all emotional tools for crowd manipulation,” he wrote in response to the report.

Breslow scheduled a hearing to revisit the July court order for Sept. 10. The unpaid applicants are also pursuing their case in the Nevada Supreme Court.