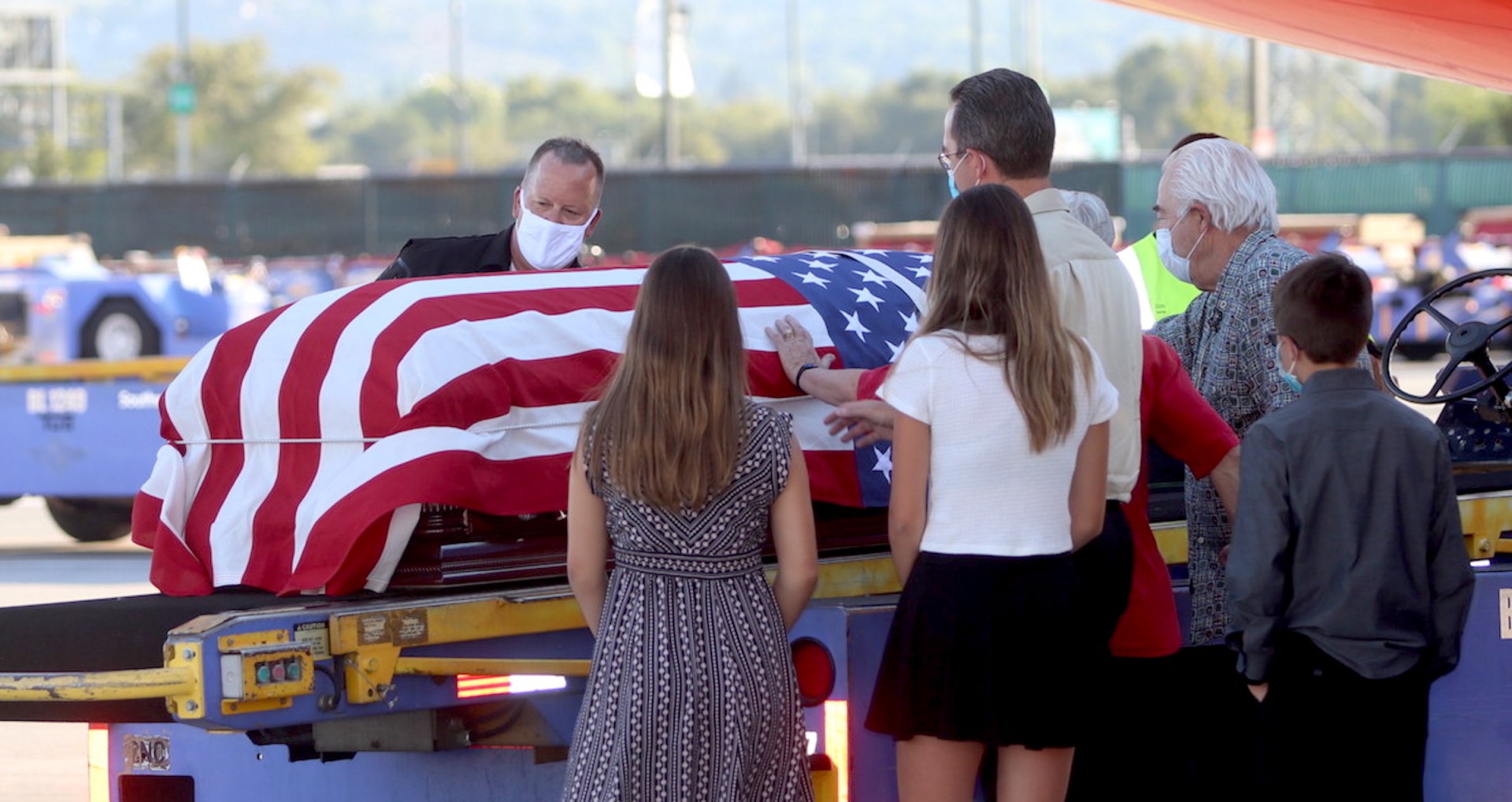 Crendell said the Army did not leave Twedt behind. The weeks and years after the pilots crashed were not forgotten. The chaplain gave thanks to the people of Bolanzo and surrounding towns, individuals, the Army and to God who all worked to recover Twedt and then bring him home.

During his eulogy, Crendell compared Twedt to the one sheep in the flock that strays, but he said it takes time and determination to find the lost one.

“We find a shepherd who has a hundred sheep and loses one of them,” Crendell described from the Bible. “Not to be content with that, he leaves the 99 saved ones in the open country with another shepherd, and he goes after the lost sheep until he finds it.”

Crendell mentioned the recovery of the pilot’s bones and other material. He said a Defense POW/MIA Accounting Agency team aided by Giampaolo Clerico, commandant of the Carabinieri Station in the territory near the crash site, began their search three years ago in the Italian Alps and almost eight months ago, scientists positively identified Twedt.

“It’s so interesting to me how they found the remains,” Crendell said. “I’m so intrigued about it.”

The chaplain said Twedt was an outstanding enlisted soldier who became an officer without having to earn a college degree and fought for the freedom of this country.

Patriot Guard Riders from different communities around western Nevada led the procession from Reno to the veterans’ cemetery, and honor guards from the Nevada Army National Guard and Nevada Veterans Coalition performed the ceremonial traditions associated with a military funeral. About two dozen Patriot Guard members — many of them veterans from previous wars in Vietnam, Iraq and Afghanistan — steadied U.S. flags in a half circle near the pavilion.

After two members of the Nevada Guard honor team folded the U.S flag that draped Twedt’s coffin, the Nevada Guard’s casualty assistance officer, Capt. Justin Klatt, presented the flag to the lieutenant’s son, William Twedt of Reno, who clutched it.

Twedt was laid to rest in the southeast section of the NNVMC.

Klatt said it’s been a privilege and honor to work with the family.

“It’s been an absolute pleasure to work with this incredible family, but also I get to hear stories of Lowell,” Klatt said. “I’ve been able to watch this journey and talk to Bill, whose been waiting 75 years to bring father home.”

Klatt said he helped the family when they first received word Lowell Twedt would be coming to Nevada.

“It’s a very special moment for us to be able to do something like this,” he said. “I have had other missions but nothing like this.”

Sue Kuhn, who traveled from Waterloo, Iowa, to attend the service, said she appreciates all the work the U.S. government has done to identify her grandfather. After a slide show showing her grandfather as a toddler to his time flying aircraft during the war, she said he was handsome, almost like a Hollywood star. Her husband, Kurt, added another dimension.

“I love America. They did not forget,” he said.

Family and military personnel first assembled on the south ramp July 31 at the Reno-Tahoe International Airport before an honor guard from the Nevada Army National Guard carried the casket with snap precision from flight 1782 to a waiting hearse. William Twedt was at the airport when the remains arrived. The flight originated earlier in the day from Omaha, Neb., where the federal government has its DPAA.

Having his father return home has a special meaning for the Twedt family and others whose relatives fought in World War II. William Twedt was only 5 years old when enemy anti-aircraft fire near Bolanzo, Italy, shot down his father’s P-38J Lightning and two others. They were providing an escort for B-17 bombers on a mission to bomb oil storage tanks in the Bavarian city of Regensberg, northeast of Munich on the banks of the Danube River.

William Twedt said the pilots crashed in the snowy, rugged Italian Alps north of Bolanzo, and an eyewitness failed to see any ejections. He expressed mixed thoughts about waiting for his father after so many years of him missing in action.

“I knew that he couldn’t possibly be alive after so many years,” Twedt said, who was accompanied at the airport by his wife and his younger son’s family. “I’m not despondent over that. I’m just glad he’s here and that we can give him a resting place. It’s really neat that I can have him here somewhere near.”

Twedt said he also has a daughter and son-in-law who live in Iowa and two other sons who reside in the Reno area.

The break they needed

After decades of the unknown, a break occurred more three years ago. A retired Austrian physics instructor, who found the wreckage of a P-38 on the north face of Kirchnock near the Italian resort town of Aberstuckl, had a gut feeling it was Twedt’s plane. The Austrian professor contacted the DPAA at Offutt Air Force Base south of Omaha to alert the DPAA of his discovery. The DPAA sent a team to the Alps to excavate the site, and in September 2019, they recovered the aviators.

“They also found the other pilots’ buried remains,”  Twedt said. “They went into the village and received some information. It’s quite something — you don’t leave anyone behind.”

In addition to finding the remains, the DPAA searchers also discovered some material evidence such as pieces from the uniform, survival gear, boots and laces, watch component and band, buttons and fragments of a holster and pistol belt. Twedt said it appears his father crashed in about 10 feet of snow at a higher elevation, and the DPAA research crew found a full skeleton. Twedt thinks the locals found the body and buried it before the Germans discovered the bodies.

DPAA requested DNA samples from Twedt, and the agency used dental records in its quest to identify the pilot. On Dec. 11, 2019, the DPAA identified the remains as those of Lt. Twedt’s. Contrary to government records, Twedt said his father was born in 1917 and was only 27 years old when he was shot down

Since he finished flight school for the Army Air Force in the early 1940s, Lowell Twedt gained a reputation for being a skilled pilot. Army brass wanted to keep him as an instructor, but the lieutenant had other plans — he wanted to join the war effort and fly overseas. Born in Le Grand, Iowa, Twedt’s family later moved to San Diego where Lowell Twedt enlisted in the military in 1942.  According to Twedt, his father attended training in Alabama, Washington State, Texas and San Diego.

Although many years have passed since Twedt was only a toddler, he distinctly remembers his dad always wearing brown shoes. He also has memories of their home in Alabama, where his father completed his Army officer training. When his father left for Europe, Twedt said the family remained in San Diego, where his grandfather had a big orange orchard. The family relocated to Reno in 1945.

The Twedt family originally moved from their Iowa farm to Southern California in the 1920s. It was in high school where Lowell met his future wife, and they only had one child.

William Twedt attended schools in Reno and also the University of Washington. He joined the Marine Corps in 1957 for almost seven months but afterward enlisted in the Oregon Army National Guard. When he returned to Reno, he transferred to the Nevada Army National Guard, serving a total of seven-and-a-half years in the military. Over the years, Twedt worked in the gaming industry in Reno and Las Vegas before retiring.

”We are celebrating the return of Lowell Twedt’s remains from a distant battlefield,” Doser said. “It’s just a remarkable story of how they recovered his body and ultimately returned it home.”

William Twedt said many people had high regards for his father.

“They found a good pilot, but they wanted to make him an instructor for a while, but he finally got to go overseas,” Twedt said, thanking those who arranged the welcome home despite the coronavirus pandemic.

When asked what it meant to have his father in Reno, Twedt thought for a minute, trying to come up with the right words.