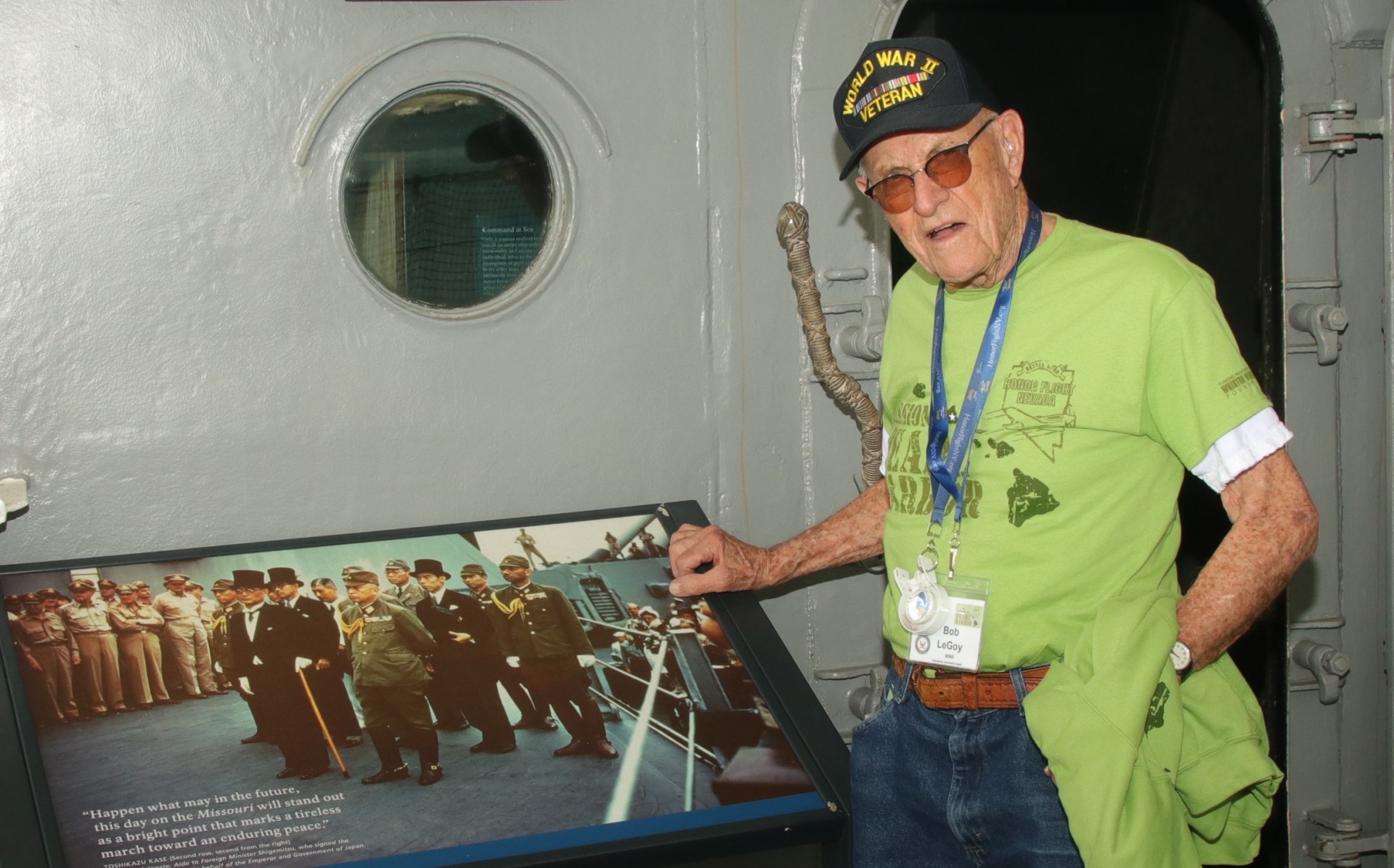 Navy veteran Robert LeGoy of Reno visits the deck of the USS Missouri where the official surrender was signed between Japan and the United States on Sept. 2, 1945. Steve Ranson / NNG
Share
0
FacebookTwitterPinterestLinkedinTumblrRedditWhatsappTelegramEmail

LeGoy served in South Pacific during final months of WWII

PEARL HARBOR, Hawaii — As soon as he could join the military, longtime Reno resident Robert “Bob” LeGoy enlisted in the U.S. Navy as a radar technician, several years after the Japanese bombed Pearl Harbor and other military targets on Oahu on Dec. 7, 1941.

LeGoy, who grew up in Bishop, California, a small town situated near the base of the eastern Sierra Nevada about 185 miles south of Reno, distinctly recalled the day and how he learned more about the destruction.

“The only radio we could get was KMJ out of Fresno (California),” LeGoy recalled. “I made an antenna, and about 100 people gathered.”

What they heard was numbing. Torpedo bombs either sunk or heavily damaged ships, planes on the flight line were destroyed and many people — both civilian and military — died.

During his final years in high school, LeGoy remembers his friends who answered the call to join the military.

“All my friends were all trying to enlist,” he said. “My step brother went anyway.”

When LeGoy recently visited Pearl Harbor, he pointed to a hill that had significance. A father of one of his classmates, Judd Collins, worked on a construction crew watching the attack along Battleship Row. LeGoy said Collins had a front-row seat to history in the making.

“I heard of some of those first-hand stories,” LeGoy said when Collins, a longtime rancher, returned to Bishop.

What Collins saw were waves of Japanese planes swooping over Battleship Row, dropping torpedo bombs and strafing military targets with their machine guns. Smoke billowed into the air.

“When he saw the machine guns hit the ships, he decided to get out,” LeGoy said.

A little more than a year after Pearl Harbor, LeGoy had enough credits to wrap up his high-school studies. He enlisted in the Navy on Jan. 6, 1943, and served for three years and three months, leaving shortly before his 21st birthday.

For the final part of his duty, LeGoy spent time on a converted trawler and refrigeration ship that had been constructed in 1936. The YP-415 spent most of its time in the Atlantic Ocean, but the U.S. Navy converted the 132-foot ship for naval service in July 1942 and commissioned it on July 17. Two machine guns were placed at the bow and stern.

“The ship carried 32 people, but it could only seat 10 at a time for meal time,” LeGoy said, adding the cooks ate in the galley.

“We left San Francisco on July 25, 1945, and passed under the Golden Gate Bridge,” LeGoy said, remembering the time of the crew leaving the San Francisco Bay was at 2 p.m. “We sailed to Hawaii and reached the islands in three days.”

Once the ship topped off with fuel and food, the YP-415 left Pearl Harbor. Le Goy said the YP-415 was part of an assembled armada positioning itself for a invasion of Japan, which, he later learned, was planned for Nov. 1. LeGoy said those involved with the invasion force expected a high casualty rate.

Three days after the YP-415 left Oahu, the crew learned of a powerful bomb that caused heavy damage to a Japanese city. Several major events in August 1945 changed the YP-415’s mission. Two U.S. B-29 Superfortress bombers dropped atomic bombs on Hiroshima and Nagasaki on Aug. 6 and 9, respectively, causing Japanese Emperor Hirohito to surrender after the second bomb.

“I didn’t think too much of the first bomb,” LeGoy recalled, “but on the second bomb, everyone got pretty excited about it.”

Plans changed quickly for the YP-415. LeGoy said the captain changed the ship’s course, and the crew headed toward the Philippines, stopping first on the island of Samar, southeast of Luzon and the capital city of Manilla. The YP-415 used the inside waterways to reach Manilla and then continued to Subic Bay, a major naval installation.

With the YP-415 arriving in the Philippines, LeGoy and the others didn’t know about a formal end of the war. On Sept. 2, 1945, aboard the battleship USS Missouri, the United States and its allies signed a formal declaration of surrender with Japan.

Four months after the signing, LeGoy headed home and enrolled at the University of Nevada,  the only four-year college in Nevada at the time, on the GI Bill. Once he earned his bachelor’s degree in journalism, LeGoy spent most of his career with Reno Newspapers, moving up the ladder to marketing director.

When LeGoy visited the USS Missouri on an Honor Flight Nevada trip to Pearl Harbor in February 2020, he spent time on the battleship’s main deck reading the documents pertaining to the formal signing and looking at the ship’s symbols describing the USS Missouri’s missions during the war. Since his time as a young boy in Bishop to his service in the Navy, LeGoy also took time to reflect on the carnage left behind at Pearl Harbor.

The World War II veterans had a quick tour of Battleship Row and the memorials marking certain vessels. One thing, though, stood out for LeGoy is how two sailors operating a small passenger boat to the Arizona Memorial wore crisp, white uniforms.“We’re getting on the boat to the Arizona, and the sailors were standing there with their white uniforms on,” LeGoy said. “They looked fantastic.”

Robert “Bob” LeGoy was one of 16 million U.S. men and women who served during World War II. Earlier this year World War II and Korean War veterans visited Pearl Harbor as part of Honor Flight Nevada’s first trip to Hawaii. The end of World War II in both Europe and the Pacific occurred 75 years ago, and the Instrument of Surrender between the U.S. and Japan was signed on Sept. 2, 1945.